The increasing use of robotics in the manufacturing sector is now being incorporated into the wood products industry. 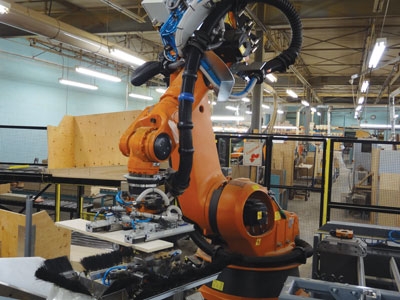 Eighty-five percent of current robotics use in the woodworking industry is on the handling side The increasing use of robotics in the manufacturing sector is now being incorporated into the wood products industry.

Companies across Canada are making substantial investments in robotics and automation technology in order to increase efficiencies and make up for shortages in the current workforce, according to a series of presentations made during a one-day seminar hosted by FPInnovations.

The seminar, held in Quebec City, Mississauga, Moncton and Vancouver, focused on how the integration of robotics in manufacturing in the woodworking industry is helping to increase the quality and quantity of products being produced. The Ontario event was held in co-operation with the FPInnovations’ Ontario Wood Products Manufacturing Initiative, which provides a variety of support mechanisms for businesses in the province’s wood products industry.

According to statistics presented during the event, 85% of current robotics use in the wood products industry is on the handling side, while 10% of mechanisms are used for assembly and 5% for machinery. These robots, such as the ones produced by Kuka Robotics of Germany, are being used in working conditions that are not always safe for human labourers, or are being used to complement other machinery already being used in the operation. That can help to create a work environment that can complete tasks continuously, quickly, safely and with a greater amount of flexibility.

With a high overhead cost, dollars and cents are one of the biggest issues facing the further introduction of robotics into the industry. However, the use of robotics can provide companies with solutions to issues that are currently roadblocks to growth, or are causing headaches within their own labour force. Robotics can be used to perform low-level tasks needed in the production process, allowing companies to stop competing on wages with competitors and other industries.

In the cases demonstrated as part of the seminar, single robots were taking the place of three to five employees. That scenario provides a cost-effective solution for replacing retiring workers, or accomplishing tasks for which qualified employees are unavailable. That ability to replace human workers will become especially important as the ability to attract skilled labourers becomes more difficult in the Canadian wood products industry.

That is the case with AP Industries, located just outside of Quebec City, which has been making high-end bedroom furniture for over 60 years. According to plant manager Rejean Lachance, AP has chosen to invest in robotics rather than replace members of its staff. With a current staff of approximately 150, Lachance estimates that around 40% of the staff at AP will retire within the next five years. With the looming shortage of qualified workers to replace them, using robotics ensures that management won’t have to scramble for staff to keep up with production demands.

The introduction of robotics has also given AP Industries an edge over its competitors, and a solid outlook for the future of the company. “If we want to be ahead of everyone, we need to think about the future,” said Lachance. And although the initial outlay for the first robot was $2 million, that robot was able to replace five retiring workers at $50,000 per worker per year, while creating a more adaptive system for production that has a better yield, quality and efficiency.

Robotics is also allowing companies to provide easier systems for customization of product orders by using new product lines that are completely automated. Representatives from Automatech spoke about their newest robotic line for cabinet production. The production line can produce eight cabinets per hour, 24 hours a day, seven days a week, with staff needed only for supervision and stocking supplies. Starting at $1.2 million for the 5,100-square-foot production line, the Automatech representatives believed that the numbers added up, making such a production facility an affordable alternative to standard staffing for a similar workload and efficiency.

One strategic benefit to the introduction of robotics and automation into the wood products industry has been the interest that the technology could provide for prospective students. With so many young people heavily involved in and interested in modern technology, the use of robotics could provide the hook to excite the next-generation workforce. According to some of the industry experts attending the Mississauga seminar, that could lessen the impact of the impending labour shortage for the wood products industry.