An idle machine is the devil’s workshop as far as the forest industry is concerned. Whether it’s in the mill yard or out in the bush, we like to see our rolling stock rolling. If there’s a piece of iron with too much time on its hands, the assumption is we have too much iron. 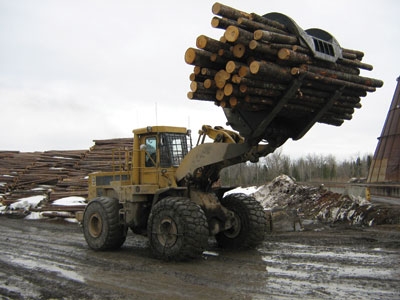 An idle machine is the devil’s workshop as far as the forest industry is concerned. Whether it’s in the mill yard or out in the bush

Yet when it comes to log sort yards or mill yards, we may be further ahead thinking of that “extra” loader as surge capacity rather than excess capacity. That is just one of the findings of a team of researchers at FPInnovations, Feric Division looking into mill yard efficiency. As one of the lead researchers Emmanuel Tran tells CFI, measuring capacity and efficiency in a mill yard or sort yard setting is not as clearcut as doing so in a typical logging job.

“First, it has always been a grey area, somewhere between mill and woods,” he explains. “We dedicate a lot of resources looking at logging efficiency in great detail, and measure productivity in the mill by the second. In between, things just happen, and as long as the mill had wood, few questions were asked. Also, log loaders in a typical mill yard are doing a lot of different chores in different parts of the yards, and the simple act of moving between these is part of their job. So measuring ‘productive’ movements is not as obvious.”

In this setting, he continues, the first job was figuring out just what they should be measuring, and how. Tran spoke with a lot of mill managers or yard supervisors to get an idea of what they felt was important. Not surprisingly, motion was a biggie.

“They all had different ways of expressing it, but the bottom line was almost always that if the machines were moving non-stop all day, they felt it had been a good day. They were uncomfortable with machines waiting for any length of time. So we started by tracking machine movement, but also wanted to understand the reasons for the waiting time.”

Dual purpose loaders
In any mill yard, log loaders serve two key functions – unloading incoming logging trucks, and keeping the mill infeed decks full of the right mix of logs. Since running the mill out of logs is a fast-track to the unemployment line for any loader operator, Feric decided to look at the other side of the equation – truck waiting times.  Here they uncovered something that would surprise more than a few mill managers, but likely no truck drivers.
“You might have a mill yard where every loader is going full tilt, and never stopping,” says Tran. “At the end of the shift, all the trucks are unloaded, the mill had wood, and you did it with loaders running 10 per cent, so maybe that’s a very efficient operation. But in some cases the truck waiting times were very long, and there is also a cost to that. You’re having a whole fleet of trucks coming to your mill, and when you have a long line waiting to be unloaded, the cost of that is much higher than just running another loader. So the question is not just what does it cost to run your loaders, but also what does it cost when you don’t have enough capacity at a given time to get the job done.”

The concept is known as surge capacity, and in many ways it’s surprising that sawmills don’t embrace it in their mill yards since it is a core design value when building a modern sawmill. For example, when specifying a new board edger, mills don’t design it for the average number of boards it will see in a day, but rather the number it must be able to handle during peak periods. A mill might send 25 boards a minute on average to its edger, but over 45 a minute when it’s in bigger wood. It’s the second number the edger must be designed for, an example of surge capacity few mill managers would argue with.

Similarly, if Feric researchers or mill yard supervisors look strictly at stats like cubic metres per hour or loads per day, Tran says they would miss the point – logs don’t arrive at the mill at a set rate per hour. They come in fits and starts, so it might make sense to have at least one log loader that works that way. In fact, some mills have come to this realization on their own while looking at things like log hauling costs or rates. One large mill in Newfoundland started tracking its log haul fleet to figure out where the costs were, and found that waiting at the mill to be unloaded was in fact a major cost for the woodlands department. The end result? Another loader added and cheaper wood costs. It may seem counter-intuitive, yet in the right scenario, it works.

“It’s hard for those used to logging operations to get our head around it, but having a log loader that sits idle for periods of time, yet is ready to jump in at a moment’s notice when the trucks start coming in clumps  may be the sign of a very efficient mill or log yard,” adds Tran. “It’s finding the right balance.”

High but close
Tran and his team of technicians and researchers tracked this, and other information in a number of ways. Working with partner mills, they installed GPS tracking systems and MultiDAT machine function tracking systems on mill yard gear. These were linked to automated data downloading stations in the yard that would send raw data back to Feric on a regular basis. Aside from helping determine the optimum loader fleet for a given mill, it is allowing Feric to collect baseline data on mill yards in general. This in turn helps identify areas requiring further research, Tran adds. One such area they have already begun looking at is the value of pick-and-carry machines with elevated cabs that allow logs to be stacked higher, and thus closer to the deck than front-end or conventional log loaders. 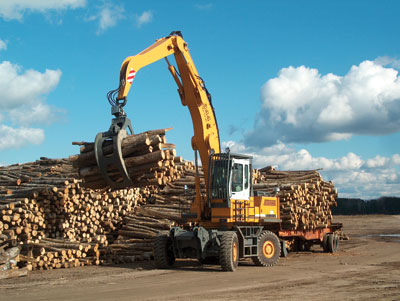 “Part of our studies has been to look at the effect of things like load capacity, travel speed, and distance on various options, from wheel loaders to trailer systems and pick-n-carry loaders,” explains Tran. “Travel distance has a major impact on productivity regardless of the system used, so one way to counter that in a mill yard is to concentrate wood closer to the decks, and the way to do that is to stack the wood higher. We looked at elevated cab loaders capable of doing just that.”

In one case they found that by going to 7.5 m high piles from 5 m cut the loaders’ maximum travel distance from 500 to 350 m, saving some $0.30 per m3. Measured another way, Feric found that dropping the average travel distance by 100m lowers wood costs by $0.55 per m3, enough to consider using a knuckle-boom loader to break apart higher log decks for front-end loaders to draw from in cases where safety is an issue.

Tran adds that a good combination in cases where even high piles end up well over 200 m from the infeed deck may be a pick-n-carry machine with trailer. The pick-n-carry on its own, with its typical 7 m3 carrying capacity shows very impressive productivity numbers when relatively close to the deck, while a standard 25 m3 trailer will help mitigate the effect of distance past 200 m.

The team also found that simply where you put the wood will have an impact on productivity and thus log costs. For instance, many mills will put their cut-to-length component close to the deck, almost out of habit or for convenience in an emergency. Tran notes that in at least one case, it made more sense to re-arrange the yard configuration so that the products it used most often were closest, even if that meant putting the CTL wood a ways off.

“It would mean a 10% drop in the amount of loader travel at this mill, for enhanced productivity and reduced fuel consumption, with no capital costs. Those are the kinds of things mill managers are interested in these days.”

Hot loading
To date, the biggest potential payback uncovered by Feric’s mill yard team comes from hot loading, or unloading log trucks directly onto the mill infeed deck when possible. The team found potential savings of $0.90 to $1.90 per cubic metre in its case studies. 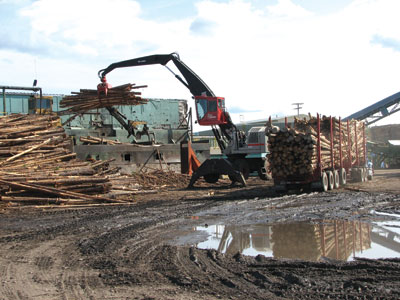 “It also means less breakage and a better quality product from the fresher wood. But of course it depends on the infeed deck’s own surge capacity and a better control of incoming trucks for a more even flow. When it can be managed, we recommend it be done as much as possible”

Perhaps this could be done in combination with stacking any log inventory as high and as close as possible to the deck. But like all the findings from Feric’s mill yard team, they are site specific and must be evaluated for their effect on the entire value chain. Yet with mills and woodlands operations looking for savings and value in each tree, this is one grey area that will benefit from a little more light.

Editor’s note: Since interviewing  Emmanuel Tran for this article, he has moved on to become an on-board technologies specialist with Hewitt Equipment, a Caterpillar dealer in Quebec. A Feric Advantage Report is available on this research. For information, contact Jean Favreau at Feric – 514-694-1140 x.353; Jean.favreau@fpinnovations.ca.