If you venture out to the back shop at Nighthawk Timber in Timmins, Ont., you will likely find Jean Marc Roy organizing parts he has just picked up from suppliers and doing other work to keep the company’s four bay shop and three mechanics organized. This may not sound like an unusual scenario, until you find out Roy is now 72 and nowhere close to wanting to retire. 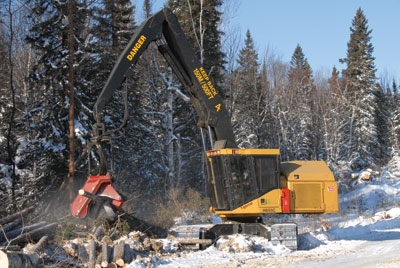 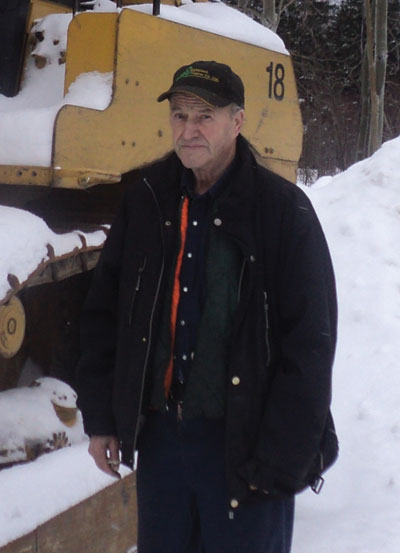 “I just want to stay active and healthy, and continuing to work does that for me,” says Roy in his native French. He also adds that Nighthawk Timber has been part of his entire adult life. He has been with Nighthawk for well over 30 years, and prior to that, he was an owner in the company Nighthawk bought out in 1979.
“Jean Marc is an essential part of the team,” says Dave Stringer, who today owns Nighthawk with his brother Don. “He’s one of quite a few long term employees we have. In fact, we have two guys that have been with us over 30 years and another seven that are upwards of 20 years.”

For many logging operations near Timmins, competing for employees with the local gold mines is one of the biggest challenges they face. Dave says that is definitely the case for Nighthawk, but he also says they have tried to minimize turnover by offering competitive wages, bonuses and a full benefits package, including a pension plan. “Timmins is a mining town and because of the price of gold, we haven’t seen the slowdown here that the rest of the country had experienced,” Dave explains. “One solution that has helped us out is our willingness to take some people with little or no experience on logging equipment and train them. When we do this, we will partner a rookie with one of our more experienced guys to help bring them up to speed on all of the safety issues before we have them work independently.”

Dave says they have also found that offering options when it comes to shifts and living arrangements can be beneficial when searching for employees. “If our guys want to work four 11-hour shifts per week and then have three days off when we are at camp jobs, we are open to that. Living in camp can be attractive to approximately 15% of our employees that are from out of town as they don’t need to find a place to live locally. It’s really a compromise. We might end up with guys putting fewer hours in on the machine, but they are happier and that translates into them being more productive when they are working and it means we can keep more of our employees longer term.”

In the Woods
Out in the bush, Gilles Dussault is one of Nighthawk’s long term employees, spending the past 18 years working for the company. He started out with the company’s small aggregates business before moving into the forestry machines. “I started out in the gravel pit and then slowly moved to the bush and now I am out here all year long,” he says from the cab of the Waratah 622B-equipped Tigercat 855 processor he is running. “They are a good operation to work with and they have excellent equipment that has heat, air conditioning and all of the other things we need.”

Timmins native Ghislain Caron is also working on a Tigercat 855 with a Waratah 622 head. This is one of the latest machines in Nighthawk’s fleet and Caron says it is highly productive and comfortable to work in. As for Nighthawk, he has been with the company for about 13 years. He went in the opposite direction, going from a mining job as a diamond driller to the forest industry. One of the things he really likes at Nighthawk is the stability. “Nighthawk can pretty much keep us going for 12 months out of the year, which is really nice. In some other jobs, you can do really well and then spend time laid off.” Like Dussault, he likes the late-model equipment and says the Tigercat/Waratah package makes his job easy and enjoyable.

Equipment Lineup
Today, Nighthawk runs three Tigercat 870 feller bunchers with GN Roy felling heads, four Tigercat 855 processors with the Waratah 622B heads and one Tigercat 860 with the same Waratah head, and three Tigercat 1075 forwarders. They also have two Valmet 890.3 forwarders and as a stump to dump operation, they run a fleet of eight T800 Kenworth trucks and contract another nine trucks. 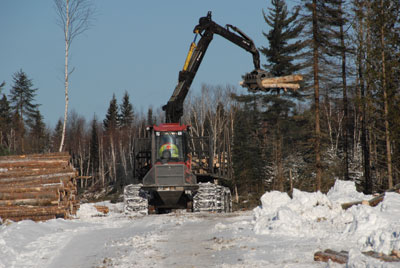 They also have their own road building equipment, including a Komatsu 300 excavator, a Caterpillar 325 excavator, a Cat D7R dozer and a Cat D6R dozer. “We will build more than 50 kilometres of summer and winter roads a year,” says Nighthawk’s road supervisor Gilles Rocheleau, who has been with the company for 13 years.

Company Growth
Dave says the company expanded about four years ago. “It seems funny to expand when things are slower, which it was four years ago, but we had an opportunity to take over another contractor’s operation that was mainly in areas that could be harvested in the summer,” he explains. “Prior to that, we didn’t have enough work in summer areas so it was tough for us to keep everyone employed year round. For us, expanding turned out to be the right thing to do.”

Today, Nighthawk primarily logs for EACOM Timber, which acquired most of Domtar’s sawmilling assets in Ontario and Quebec last year. This year Dave anticipates they will hit 300,000 cubic metres for EACOM. 75% of that will end up at the EACOM mills, with the balance being directed by EACOM to other mills in the area, including Georgia Pacific’s oriented strand board mill in Englehart, Ont.

With logs going to various mills around the region, Dave says they also must have a good support team in the office. That’s where Lori Martin and Monique Morin come into the picture. “They really keep us organized on the paperwork side of things,” Dave says. “There’s a lot of work to be done here at the office and Lori and Monique keep us on track.”

Family Ties
For Dave and his brother Don, the forest industry has always been in their lives. Their dad Ken, had a logging business and their mom Sheila, did the books. “We grew up working in the company,” Dave says. “Then in 1979 when the contracting company that Jean Marc partially owned went up for sale, Don and I got together with our dad and bought it. We then consolidated the two companies and went from there.” Eventually, the brothers bought out Ken.

When they first got started, the company was essentially mechanized, but Dave says they still did some manual cutting with chainsaws. They had Timberjack 230 cable skidders and Drott 40 feller bunchers with shear heads. They would delimb with a chain saw. Today, it is quite a bit different as 30-year employee Michel Dumas will tell you. “These new machines are just great,” he says. “I’m on one of the new Tigercat 870 feller bunchers and it’s a good smooth ride, manoeuvrability is excellent and Tigercat builds their machines to do the job.”

Buncher operator Remi Leblond couldn’t agree more. He is one of the newcomers at the company with just four years under his belt. I’m new to Nighthawk compared to some of these other guys, but I have been in the business since 1993,” he says. “I run the processor and the forwarder once in a while, but most of the time I am on the buncher and I have to say, it is much more stable than the older bunchers that I have worked on.”

Not only does Leblond like the equipment, he also likes the company and the job. “This is an excellent company to work for and in my job, things change every day. You don’t get bored. It’s not like sitting at a desk day in and day out, or working in a mine where you are staring at a rock face every day.”

At 33 years with Nighthawk, Ron Racicot is one of the company’s longest term employees. But like newcomer Leblond, he says Nighthawk is just great to work for. “They are nice guys and they take care of us,” he says when speaking of the Stringers. These are the types of comments Dave and Don Stringer like to hear. “It’s important to us to have a group of employees that want to be here,” says Dave. “We are here for the long term, and we hope our employees are as well.”

Most won’t be on Nighthawk’s payroll for as long as Jean Marc Roy, but the 20-year-plus club just keeps on growing.