The heritage of excellence in forestry and logging runs deep in the province of New Brunswick and nowhere is this more prevalent than in the northern regions of this maritime area. Today, forestry is the dominant industry in the province, being both the major employer and the principal exporter. Up to 14 communities in N.B. are completely dependent on the forest industry for their livelihood. 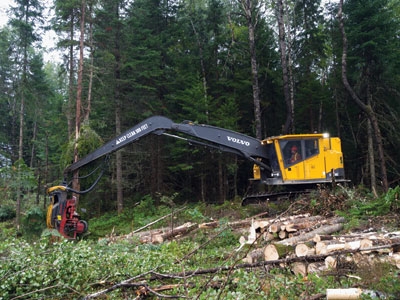 Caron’s FBR2800C processor shows off its reach and swing torque capabilities. “The swing torque is great. When you get a tree down The heritage of excellence in forestry and logging runs deep in the province of New Brunswick and nowhere is this more prevalent than in the northern regions of this maritime area. Today

Here, arguably the most successful of all maritime forest production companies, J.D. Irving Limited, has grown from humble beginnings in the rough and tumble Acadian sawmill town of Bouctouche, N.B., to be one of the largest owners/lessors of forest lands in North America.

In the northeast corner of the province, the towns of Edmundston and Saint Leonard and their surrounding areas, are two such communities where the economy is driven by forestry with a small mix of other agriculture disciplines tossed in for good measure.

It is here, in the Edmundston area, that Fernand Caron began a very rewarding career as a forest harvester. At 64 years of age, Caron still goes to work in the forest on a daily basis.
Following closely in père Caron’s footsteps is Marco Caron, president of GJMV Caron, Inc. Drawing heavily on the heritage of excellence learned at his father’s side, the company continues to be one of the more successful foresters in the region. 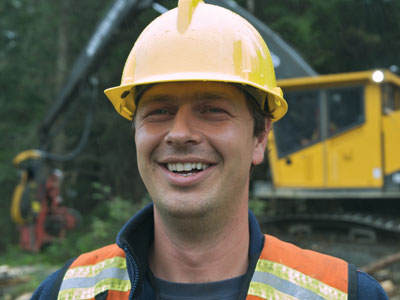 Most recently, Marco and his crew have been working under contract to J.D. Irving Limited, harvesting a mix of spruce, balsam, fir, poplar and birch and delivering it to the company’s mill in nearby St. Leonard.

Shopping the Market
Last year, it became clear to Marco that he had to upgrade his forestry harvester to remain competitive in an increasingly aggressive timber market. Like all good businessmen, he did his due diligence and “shopped” the market. “I checked out what everyone had to offer,” Caron says. Then, while attending Forest Expo in Halifax, N.S., in September 2008, Marco saw the new Volvo FBR2800C Harvester in action. It certainly got his attention.

Volvo Construction Equipment had re-entered the forest equipment manufacturing business in a major way a few years prior with the introduction of its popular and productive tracked forestry carrier line. In years previous, Volvo, BM based in Eskilstuna, Sweden, was one of the largest and most respected international forestry equipment manufacturers with several pioneering products and leading-edge technology. The forestry machinery business line represented a sizable portion of the total company offerings. In 1977, Volvo/Volvo BM’s decision to fully concentrate its activities on construction equipment had led to the decision to divest the company of its forestry equipment operations.

“With the success and acceptance of the new Volvo tracked forestry carrier line, we knew that it was time to expand our horizons,” stated Ken Kelly, Volvo’s North American director of forestry. “We started by taking a close look at what the others were doing. As well, we drew heavily on Volvo’s heritage of excellence in their global tracked excavator business line. In the spring of 2007, Volvo approached Pierre Gaudreault, president of Technologies Directes, the Quebec City based manufacturer of feller bunchers and harvesters. Volvo made Pierre an offer for the company’s business, technology and intellectual property, and the rest is history.”

Today, Gaudreault continues to head up the Volvo Feller Buncher/Harvester engineering design team. “With Direct we knew we had a good product,” Gaudreault notes. “We needed Volvo to help us go to the next level.”

Product Introduction
At the Halifax based 2008 Forest Expo, Volvo Construction Equipment introduced its new forestry equipment, including the three models in the brand new Feller Buncher/Harvester line: the full size FB3800C; the minimum tail-swing radius FB2800C; and the zero tail-swing FBR2800C, all of which are available in either feller buncher or harvester configurations.

When Marco Caron returned home from the show, he immediately approached Strongco Equipment, Volvo Construction Equipment’s premier dealer in Eastern Canada. He wanted to find out more about the Volvo feller buncher/harvesters he saw in Halifax. Shortly thereafter, Serge Bergeron, Volvo’s forestry segment manager based in Quebec City, and Mickel Nadeau, Strongco’s forestry representative for the Atlantic region delivered the Volvo FBR2800C Harvester with the serial number ending in 001 to Caron’s N.B. cut-block.

“We liked what we saw in Halifax and we wanted to try this Volvo, and I can say that it has met or exceeded our expectations,” stated Caron, adding that with over 1700 hours now on the machine, it has performed flawlessly. “Oh there have been some minor issues, it wouldn’t be a newly designed machine if it didn’t have at least a few,” Caron said with a wry smile, “but Volvo and Strongco have been right there to help us out, they have been great.” 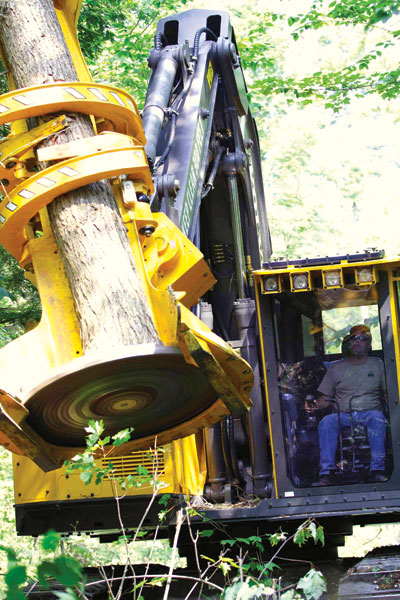 The 27,200-kilogram (60,000-lb.) Volvo FBR2800C is a zero tail-swing machine and when in harvester configuration it has a boom and arm reach of just over 10.15 metres (33.3 ft.). It also has a Volvo turbo-charged diesel engine with V-ACT, is optimized for forestry hydraulics, features a tractive effort of up to 35,555 kilograms (85,000 lb.), and offers a newly designed Volvo Forestry Care Cab. Maintenance access is maximized with the gull-wing design of the engine compartment. Caron’s FBR2800C is equipped with a Waratah 622B processing head.

Main Operator
Caron’s senior operator, Guy Beaulieu, who has been at the controls of the FBR for more than half of the total operational hours, is very pleased with his new harvesting ‘office’. “The reach of this Volvo is great,” stated Beaullieu. “There is lots of power for the boom, track and attachments. The swing and boom are excellent. The cab is very comfortable with lots of room, good visibility and the night lighting is perfect. There is plenty of light where you need it.”

Marco Caron and his crew of six operate twenty-four hours a day, five days a week, harvesting a mix of pulp wood and saw logs. In this cut-block close to Black Brook, N.B., there is a nice mix of second growth softwood, spruce and fir as well as hardwood, poplar and birch.

Under normal circumstances this past winter and spring, maintaining production quotas might have been difficult for Caron and his crew. First there was the learning curve that comes with any new piece of equipment. Then this winter, the region experienced greater than normal snowfall and both the spring and summer have been much wetter than normal. According to Caron, “It hasn’t always been easy, but with this Volvo we have been successful. It has met or exceeded our expectations in every area.”

In addition to the Volvo FBR2800C, Marco Caron owns and operates two Timberjack 1110 forwarders as well as an aging Rocan Enviro thinning harvester. 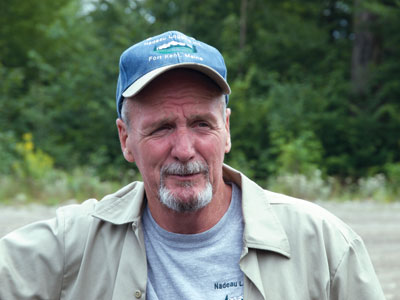 Just across the Canada/USA border in Fort Kent, Maine, Paul Nadeau and his team have been putting another FBR2800C to the test. This model is in feller buncher configuration with a Gilbert 3022L felling/harvesting head. “This is a pretty good machine,” Nadeau was quick to point out. “Plenty of swing torque and track power. Matter of fact, in my opinion it has better tractive effort than the current bunchers I own.”

Nadeau and his crew have been working this FBR2800C pretty hard. The daytime temperatures in the region have been very high and overheating was a problem with some of Nadeau’s other bunchers but not with the Volvo FBR2800C. Paul says, “We worked it pretty hard. I know my operators made every effort to see if it would overheat but it didn’t.” That certainly seemed to impress this very experienced, veteran U.S. logger.

Nadeau’s maintenance team was impressed with the accessibility to literally every critical area of this new Volvo feller buncher. As well, the operators really liked the visibility provided by the redesigned roof to floor front windscreen on the cab.

Nadeau had his most senior operator on the new buncher and he was producing 1,200 to 1,500 cords of wood daily. According to Nadeau, “We were working in hardwood that was between 20 to 25 inches (50 to 58 cm) on the butt. It was big, heavy wood for us. I think fuel wise the Volvo was about the same as our other bunchers but it is a more productive machine. We can cut more wood with the same amount of fuel.”

There are a number of new Volvo feller buncher/harvester models working on various cut-blocks in western Canada as well.

Paul Nadeau best summed up the comments of most forestry equipment owner-operators who have had the opportunity to work with or demo this new Volvo Forestry Solutions initiative: “Everything we wanted was on that machine.”

There seems to be little question that Volvo’s heritage of excellence in forestry has been reborn and the future is bright.

Ron Mullins covers forestry and writes for Volvo on a regular basis.