June 13, 2014 - Engineered wood products have come a long way since a Brit named Sir Samuel Bentham first conceptualized plywood in 1797. Because these products provide many important and unique benefits, they have become a permanent fixture in the range of materials now being selected and used in building construction.

Much of the benefit lies in the fact that engineered wood products offer consistent quality and come in specific thicknesses, panel sizes and durability profiles. The strength of these products far surpasses wood. Indeed, glued laminated timber – glulam – is stronger than steel, per the same amount of mass, but takes less energy to produce. At the same time, engineered wood products can be worked like any piece of lumber and some are meant to be finished attractively with stains or paint. The products are also environmentally friendly because they can be made from small pieces of wood, defective wood or unpopular tree species.

Chantiers Chibougamau Ltd. in Chibougamau, Quebec, is one of Canada’s leaders in engineered wood products and systems. The company was started in 1961, when Lucien Filion and his employees began sawing timbers for the local mining industry. During the 1970s and 1980s, production shifted from squares to random-length dimensional lumber, and in the 1990s, the idea came along to consider engineered wood processing. The first product was finger-joint.

“Since we are the forest products company located most north in Québec, the trees available were so small in our area that we had to deal with strong softwood products, but they showed some flash that was affecting the value,” says Chantiers Media Manager Frederic Verreault. “By jointing good-quality pieces, we were able to sell higher-value studs.” He also notes, at the same time the company was getting familiar with the jointing technology, the new taxes on softwood lumber going into the U.S. appeared. “So we decided to confirm our commitment to engineered wood products at that time, and we have continued to develop our diversity of products ever since,” says Verreault.

In early 90s, Chantiers added HewSaw technology, allowing the use of small cross-sections of wood that would be otherwise unusable. At the same time, they also installed a flange production line and tension testing, which heralded the advent of joist production and the creation of its Nordic Engineered Wood brand in 2000.

To create Nordic’s beams, headers, columns, tall wall studs, and their new NI-90x I-joist series from treetops and side cuts, Chantiers created a process called ENVIRO≡LAM. “This process offers greater dimensional stability than traditional timbers or glulams made from wide-dimension lumber,” says Verreault. The Nordic I-joists, used in floor and roof construction, consist of top and bottom flanges of various widths united with webs of various depths. They are able to carry heavy loads over long distances while using less lumber than a dimensional solid wood joist of the same load-bearing capacity.

As the years went by, Nordic got calls from customers requesting more refined architectural solutions. This led to the creation of Nordic Wood Structures, a product line that includes straight and curved beams, arches and decking for use in non-residential projects. Verreault says market needs have also compelled Nordic to create dimension-sized glulam headers for wall panel producers and glulam log cabin blanks for manufactured housing.

To reach markets across Canada and parts of the U.S., as well as Europe and Asia, Nordic has set up sales offices and forged relationships with distribution partners. They have also established a permanent reload with full product mix capability for fast shipment on mixed truckloads to complement its direct railcar capabilities. Chantiers employs over 700 people, including those at Nordic. Last year, Chantiers employed some 30 to 50 workers to manufacture X-LAM for a dozen different construction projects. The company has deployed more than 50 projects since 2011, mainly in the non-residential construction sector.

X-LAM development
Nordic X-LAM is an innovative cross-laminated timber panel (CLT). Verreault describes it as a strong, lightweight, fire-resistant material that is an environmentally friendly and cost-efficient alternative to concrete and steel for building foundations, frames and other structures. The easily assembled panels are made up of two-by-fours. “Having a higher strength to weight ratio than steel and concrete, X-LAM is rapidly gaining in popularity amongst engineers, builders and architects who want a greener alternative for slabs and walls,” says Verreault.

It was in late 2009 that X-LAM product development began at Chantiers. “Sylvain Gagnon and others at FPInnovations first organized an exploratory mission in Europe to look at similar products,” says Verreault. “Our founder Lucien Filion was part of the trip and, when he came back, it was clear that he wanted to start developing this new project as soon as possible, so the work started right away.” Verreault says the lamination and gluing techniques they developed were inspired from the development of their previous technology for glulam around 2000, with the main difference being of course the crossed layers of the structural panels.

In terms of how much these panel products speed things up for contractors, Verreault says, “For all the projects we’ve done so far, it took less than a week to complete a storey, which is particularly fast. For multi-level buildings in particular, X-LAM CLT replaces concrete or steel. The speed comes from the enormous sizes of each panel (up to 65 feet long by 8 feet), the fact that they are delivered precisely processed and the ease of using them on the job site, no matter what the conditions happen to be.” Verreault adds, “of course, having both the walls and the ceiling pieces ready to install at the same time helps as well. Finally, time is also saved when the panels are not hidden for some parts of the final building. This is all good news since time is money.”

Verreault describes the panel manufacturing process as “quite simple.” “Once we have the two-by-four pieces, some of them are jointed over 65 feet,” he says. “They are later brought in the CLT section of the plant. Once side-by-side, over eight feet wide on the production line, we add the adhesive. Then on the other axis, come more two-by-fours to cover the previous layer.” Adhesive is added again, and the steps are repeated three, five or seven times, depending on the product that is required. “All the equipment was made specifically for the process we developed,” says Verreault, “with no particular changes since then.”

In terms of what has been or is most challenging in the entire X-LAM chain – from development to manufacturing to marketing and sales – Verreault says it is definitely the marketing. “The biggest challenge is clearly in introducing a whole new way to design and build multi-storey projects,” he says. “It’s about educating people and we must take this one step at a time. We make the demonstration of how efficient and cost-effective this system is and people can see for themselves.”

Most of the demonstration projects have been private multi-residential projects in the northern Quebec, Saguenay–Lac-St-Jean and Québec City regions. “We are still in the early marketing of the product, but we are at advanced levels for constructing some very stimulating projects in the U.S.,” says Verreault. “The interest is growing which is a good thing since we already have the capacity to deliver thousands of units per year. At the moment, less than five per cent of our more than 600-person team is dedicated to X-LAM CLT and therefore, we have lots of room for development.”

Verreault says their company plan is basically to keep working hard. “We will continue to be more and more competitive and gain more market share, compared to other materials,” he explains. “Since building with light frame timber structures has been approved in Québec for buildings making up to six storeys in 2013, X-LAM is competing with other wood products as well, but we believe our products have the best characteristics. And we are ready to devote more production capacity to X-LAM within a very short time-frame.”

“The demand for engineered wood solutions continues to grow with the standardization of building codes and the need for verifiable performance by code officials, insurance agencies, and homebuilders,” Verreault notes. “At Nordic, we believe it’s very important to have an ongoing dialogue with builders, specifiers and retailers. These discussions will also be a vital link in the product development chain.”

Code changes
Cross-laminated timber (CLT) products were first developed in Austria and Germany in the mid-1990s, and since then they have been gaining popularity in residential and non-residential applications in Europe.

“In the early 2000s, construction in CLT increased significantly, partially driven by the green building movement but also due to efficiencies, product approvals, and improved marketing and distribution channels,” says Sylvain Gagnon, FPInnovations associate research leader (structural performance group). “The easy handling in construction and the high level of prefabrication involved that facilitate a quick erection time are just some of the key advantages, especially in mid- and high-rise construction.” Good thermal insulation, good sound insulation and a fairly good performance under fire conditions are added benefits.

Though established in Europe,  CLT products and systems are new to Canada and the United States. “Yes, the use of CLT in North America is gaining interest in both the construction and wood industries, and several North American manufacturers, including Chantiers/Nordic are in production,” Gagnon notes. “In order to move market acceptance and demand forward, CLT as a structural system needs to be implemented in the North American codes and standards.”

With assistance through the Transformative Technologies Program of Natural Resources Canada, FPInnovations launched a multi-disciplinary research program on CLT in 2005 including studies, testing of samples and analyzing information from Europe. The result was the creation of a FPInnovations peer-reviewed Cross Laminated Timber Handbook in Canada in 2011. The  U.S. followed in 2013 with the publication of a U.S. edition.

“Since the publishing of this handbook, interest in CLT has increased without a doubt,” says Gagnon. “Several buildings were built with CLT all across Canada. This is just the beginning of the story in North America. More to come.” 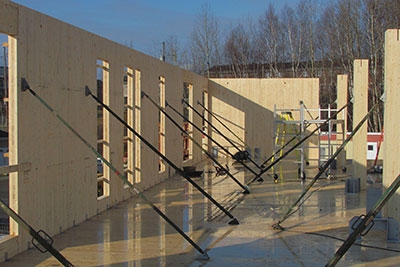 One of the reasons the use of X-Lam in multilevel construction is so promising is that the vertical structural elements act both as columns and walls. Their fast installation is economically attractive since they reduce construction delays and costs. Engineered wood products have come a long way since a Brit named Sir Samuel Bentham first conceptualized plywood in 1797.
Print this page