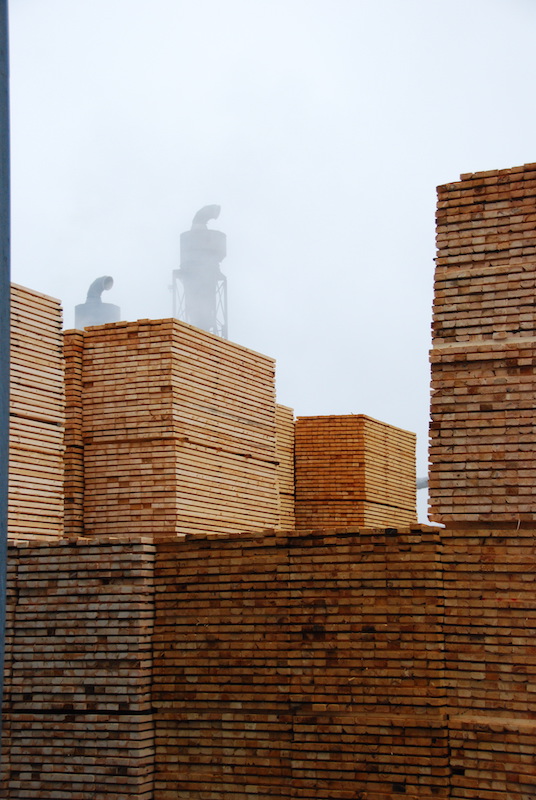 The exuberance from the first half of 2018’s lumber market has long since faded as FEA/WOOD MARKETS’ Global Softwood Log and Lumber Conference switched to a gloomy mood at this year’s event (held May 8-9 in Vancouver).

A year ago, almost all key markets were reporting steady demand amid a tight supply situation, resulting in rising prices. This year, a supply glut has put many softwood lumber prices at or below break-even levels in key market regions, awaiting a kickstart in demand to allow product to work its way through the many supply chains.

Extraordinary environmental events, including storms, unusually wet or dry weather, beetle outbreaks and forest fires have combined to impact both supply and demand in many producing and consuming regions, contributing to the current global supply/demand imbalance and weak prices. On the demand side, abnormally wet winter and spring weather has contributed to a slowdown in U.S. home construction so far this year (the wettest in the history – going back to 1895 when national weather data collection commenced). Conversely, a series of windstorms, hot summers and a large spruce beetle outbreak have led to a substantial timber salvage program in central Europe that has created incremental log supplies and sent more lumber from central Europe flowing into world markets.

As a result, many key markets peaked in Q3/2018 before slumping subsequently. With slow markets in the U.S., too much Canadian SPF lumber was diverted to China, causing a glut of dock inventories since the start of 2019. In combination with weak U.S. (and now Chinese) markets, many SPF mills were curtailing production significantly in 2019 until U.S. prices finally started to bounce back in June.

Furthermore, with Brexit causing uncertainty in U.K. markets, more European wood has been exported to other non-European markets, e.g., China, the U.S. and even Australia. Essentially, most major global markets face surplus supply and low prices, and that is causing pain for exporters. However, there is a sense that most market fundamentals are otherwise good, and that it is just a matter of time for excessive inventories to clear out so that markets can return to better balance.

U.S. housing starts in 2019 Q1 were about five per cent lower than they were through 2018 Q1, due in part to record snow and rainfall through much of the eastern U.S. states that disrupted construction. However, overall demand indicators otherwise look good.

At this year’s FEA/WOOD MARKETS’ Global Softwood Log and Lumber Conference, FEA’s Brendan Lowney gave an overview of the U.S. economy and housing markets. The robust U.S. economy is now slowing somewhat, in part due to a strong greenback and weak global growth. FEA’s forecast indicates that GDP growth has likely hit its cyclical peak. On the positive side, unemployment is at a multi-decade low and real household incomes have been rising gently since 2015. Sales of existing homes are up, affordability of new homes is improving, and the U.S. housing stock is getting older (average of ~40+ years); these elements should provide a healthy tailwind to both replacement demand, and the repair and the remodelling segment. Building permits are also rising, although weather has delayed builders from getting started in many regions this year.

The U.S. housing market is still well underbuilt. Conservative demographic estimates suggest the country needs 1.5 million housing starts per year to meet the population’s overall needs. Although 2018 starts were the highest they have been in eight years (1.25 million units), they have barely reached the level of previous recessions! A tight supply of trade labour (and projected to remain tight for several more years) is constraining housing construction. High development costs, strict regulatory requirements, and delays in obtaining municipal permits are also restricting housing development in many states.

The long-term outlook calls for an improvement in housing markets. By 2023, the peak of the millennial demographic will be at 32-33 years old – the median age for purchasing a first home. Although credit conditions remain tight, continuing low interest rates mean that U.S. house prices may still be relatively affordable compared to incomes in many markets. Furthermore, the difference between the average price of a new home and that of a re-sale home is coming down, indicating that builders are beginning to build higher numbers of more affordable entry-level homes.

Although housing markets are set to boom in the long-term, in the short-term it is becoming doubtful that this year’s construction will outpace that of 2018. As FEA’s Paul Jannke pointed out, in order to return to an annual rate of 1.25 million starts for 2019 to offset the slow, weather-constrained building activity of 2019 Q1, builders would need to construct at an even faster rate of 1.3 million starts (annualized) through the summer and fall. While possible, this is not a certainty.

Short-term: mill curtailments have been needed

A panel discussion including Jannke, Tom Christensen of Christensen Lumber, Tim Atkinson of Stimson Lumber and Christian Provost of Boscus Canada discussed the need for short-term sawmill curtailments in order to bring the lumber market back into balance. Christensen pointed out that two to three billion board feet will need to come out of North American markets over the summer to achieve better balance with demand. About 1.5 billion board feet of this reduction had indeed happened by mid-June 2019 (mainly SPF), but it will likely be difficult for more mills to curtail as mentioned by Provost; when companies curtail mills during tight labour markets, it can be difficult to find enough employees to reopen later. This leads to a reluctance by mills to curtail except for short periods and has been the part of the problem so far in 2019.

Jannke warned that it could take considerable time (a few years) before the U.S. market starts to require additional lumber supply over and above North America’s existing mill capacity (given the scheduled start-up of many U.S. South mills). Ongoing sawmill curtailments and some closures in the B.C. Interior have already assisted in tightening the lumber market supply in the medium-term time frame.

Supply reductions in BC

Jim Girvan of MDT Management provided an update on the wood supply situation in the B.C. Interior as part of a panel that took a deep dive into the B.C. Coast and Interior regions’ forest. Girvan left some of the audience stunned with his forecast for B.C. Interior lumber production in the next decade.

As background, in 2010, Girvan, his business partner, Murray Hall, and myself, collaborated in producing a blockbuster outlook report on the B.C. Interior timber harvest and wood products industry. The resulting forecast ¬– “16 sawmills to close by 2018” – made headlines nationally and around the world. To date, about 17-18 sawmills have closed since the 2010 forecast was made.

In his new forecast (BC Interior Regional Fibre Supply Forecast: analysis and forecast of BC timber availability and wood products production to 2028 – to be published by FEA in August), the B.C. Interior’s predicament is framed by a declining timber supply predicated on several factors:

By 2023, the B.C. Interior’s harvest will be 20 per cent lower than it was before the mountain pine beetle outbreak, leading to a 22 per cent reduction in lumber production (to 9.5 billion board feet). In combination with fires, spruce beetles and the caribou protection strategy, further reductions in lumber output are likely to occur by the end of the next decade with even more sawmills (and OSB mills) closing, not to mention the possibility of a pulp mill, pellet plants and a co-generation plant closing.

Liu Nengwen and Shen Wei of the China Timber and Wood Products Distribution Association (CTWPDA) presented an update on Chinese softwood markets. China is the world’s largest wood-consuming country, requiring 600 million m3 wood per year, with imported forest products representing some 54 per cent of this demand.

Chinese log and lumber demand slowed in 2018, resulting in no change in import levels from 2017. Implementation of strict environmental regulations throughout 2018 (and increased enforcement in 2019) have resulted in hundreds of small and medium-sized wood products businesses (sawmills, veneer plants, furniture and flooring manufacturers) closing permanently. Larger and more modern factories will eventually capture this market share, but the market needs time to adjust. Many factories have not closed, but rather moved their facilities to inland China in order to take advantage of the One Belt/One Road system that enables them to access rising volumes of Russian lumber.

China currently has more softwood than it needs, as low North American lumber prices initially motivated Canadian exporters and Chinese importers to import extra volumes through the winter. Port stocks are usually higher in the spring, but this year (caused in part by a lack of customs inventory information at the largest wood-importing port, Taicang) importers were forced to buy “blind” in February and March, i.e., without knowing what actual inventory levels were. This created an even larger spike in stocks.

Speaker Clark Binkley of International Forestry Investment Advisors looked back at global forecasts conducted almost 40 years ago and provided a sage comment: “It is hard to predict some things.” Current conditions in global softwood markets certainly illustrate how difficult it can be to forecast and plan. Trees must be planted many years ahead of when they can be harvested, harvest planning may occur months before logs are consumed at sawmills, and international shipments are made with the assumption that there will be a market once the volumes arrive. In the meantime, much can change. In 2019, much of this unpredictability is tied to unforeseen weather and natural disasters, whereas the 2018 record-level prices were more about disruptions in the supply chain. As a result, year-over-year forecasts are subject to many uncontrollable events. However, Binkley made the point that there will likely always be enough supply of most commodity items in the forest industry, so price spikes and crashes tend to result from short-term market factors.

Global lumber consumption has slowed in the last few years; from an average of 3.5 per cent between 2013 and 2017, global consumption slumped to 0.9 per cent in 2018 and it is forecast that 2019 will be a paltry 0.4 per cent. While most major producing regions are forecast to have flat production growth, the exception is Europe. With a spruce bark beetle salvage program underway, Europe’s lumber production is forecast to grow at three per cent in 2019 compared to a domestic demand forecast of 0.5 per cent. Consequently, all of Europe’s incremental production will need to find export markets and some of those markets are already full!

This sums up the global market situation that has occurred in the last few years. Short-term impacts have dominated, creating unbalanced market conditions. Any concerns about any potential mid- to longer-term supply dynamics are essentially irrelevant at this time, as the short-term dynamics are all too numerous and need time to be sorted out.

This article is extracted from the May and June issues of WOOD MARKETS Monthly International Report; further summaries can be found at www.woodmarkets.com/publication/wood-markets-monthly.