Contractors in BC are taking a page right from the Kenny Rogers’ gambler’s song as they tough out the downturn with survival strategies. You got to know when to hold ’em and when to walk away, they say. 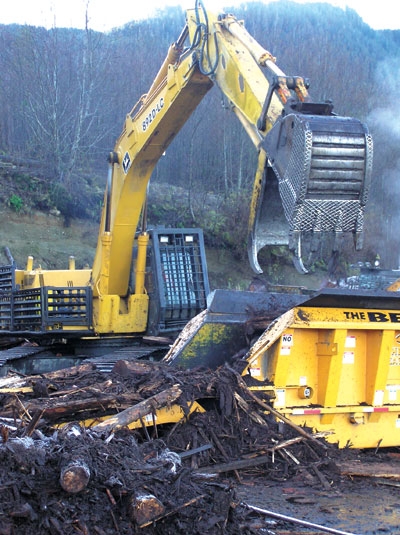 Contractors in BC are taking a page right from the Kenny Rogers’ gambler’s song as they tough out the downturn with survival strategies. You got to know when to hold ’em and when to walk away

Jacqui Beban of Frank Beban Logging Ltd. says that “If we bid on work, we won’t try to get the work by being the lowest bidder. We need a rate that has a comfortable margin and we can make money with.” Beban says the industry has seen contractors competing to the point that “ridiculous” bids are put out.  In the end, the winning contractor ends up with a losing P&L statement.

Risk management today is “critical”, she believes, and a prime reason why “we are becoming a lot more picky about the work we take on.” The jobs need to be of a scope that “make sense” economically, and in areas where Beban has a comfortable operating history.

“We are not upgrading our equipment,” she says, echoing other contractors who are holding onto equipment longer. “But, if we have an engine blow,” she says, “and it makes economic sense (it’s a high-use machine), we will replace it with an energy-efficient engine that consumes less.” But, conversions are expensive and there has to be reasonable payback period. 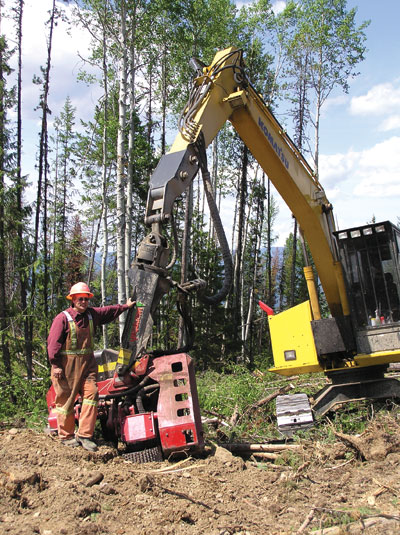 Randy Spence of R. Spence Contracting Ltd. in Vernon purchased a used Komatsu log processor this summer to supplement his John Deere and Linkbelt processors with Waratah 622B heads.  It made sense, says Spence, because he was double-shifting his two other processors on a six and seven day week and piling up the over time.  That extra machine not only “brought down the overtime” but also reduced operator fatigue impacting efficiencies.

Spence, like most contractors, is running equipment longer. “You have to run your equipment longer today than you used to before you traded it in,” he says. If in the past equipment was traded off after 8,000-12,000 hours of service that figure is almost doubled today. The new benchmark now may be 16,000-20,000 hours, hours more familiar to eastern contractors until recently.

Maintenance Key
Don Bendickson of BenWest Logging Ltd. in Campbell River agrees that equipment is being held onto longer, making maintenance more critical. “We haven’t bought equipment this year,” he says, “But, we are doing more on the
maintenance side so that we don’t come out of this with a pile of junk, and can take on work when it becomes available.”

Bendickson says a strategy employed in his company today is scrutinizing even small costs.  “The nickel and dime stuff might have been overlooked in the past,” he says. Things such as satellite phones with a monthly charge, which are not being used, might have stayed on the book, but not today. “We are really trying to cut out all wasteful spending,” he says.

Bendickson is hanging onto his skilled people where possible. “Labour is a double edged sword,” he says. “There is an acute shortage of labour on the Coast. You can’t be hard on your crew.” He says he uses a “core crew” that is versatile rather than new hires.

Fuel prices are also hitting contractors hard. “But, we have really got our hands tied,” he says, as contractors have been unable to hand over these costs to licensees. Fuel-efficient engines are high on the wish-list, but “you have to be confident of the future” as the pay back is five to eight years. 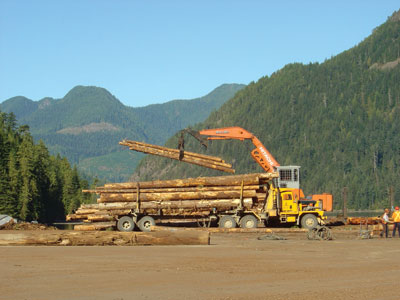 Fuel costs have become a big consideration for D’Arcy Berry of Port Alberni’s JW Berry Trucking Ltd., which offers support services and residue grinding to the forest industry. “Fuel prices have gone through the roof,” he says. The company’s management has talked about incentive programs for drivers who save fuel either by reducing idling time, examining shifting patterns, shutting off trucks when being loaded, or, reducing speed when travelling. “But, it’s only been
discussed,” he says, partially because management is still considering ways to measure performance and provide driver incentives.  Berry says the perceived savings would accrue not just from fuel but in maintenance.

Bulk Buying
Like other contractors, Berry says his company is attempting to buy in bulk from suppliers –such as teeth for the grinders – to bring down the unit cost. “But, it’s a fine line,” he says. It’s a cash outlay up-front. “If you know you are going to be working steady for the next few months, why not buy a four-month supply?” he says.

For Berry, personnel are the life-blood of his company. Berry stresses the team effort. “I am also pushing everyone to multi-task,” he says. “We are pretty fortunate that most of the crew can run an excavator, drive a truck and run a front-end loader.”

Multi-tasking has become diversification for some contractors. Some have sold out the forestry side of the equipment and kept only the basics needed to rekindle that side when the climate is better. Two such companies are Taylor and Taylor Contracting Ltd. in Prince George, and Mallard Logging Ltd. in the Kootenays.  Calling it “a real hard decision to make,” Rick Taylor put his iron on the auction block this spring as Mackenzie, his prime contracting area, was badly hit by the closures. Work in the Prince George was slim pickings. “I didn’t want to come down here and fight with everyone,” he says. He kept the basics to start up again, and kept a driver who had been with him for 20 years, who is now hauling groceries. Taylor, who might start up again in fall or winter of 2008, used his conserved equity to buy new and used equipment.

“I’ve always run John Deere,” he says, adding his 20-year track-record and good relations with Brandt can rally a fleet in as little as three weeks.

Ken Sanders, office manager for Mallard in the Kootenays, says in June, 93 pieces of equipment and logging trucks hit the auction block and the company resigned its contract with hard-hit Tembec Industries, which this spring launched a re-capitalization plan. Sanders says the logging company “was just going backwards every day” with Tembec’s situation representative of many large companies.  They are just not able to pay what the larger contracts need to survive, he says.  Mallard Lowbedding Ltd., another Mallard company, is still in business, and the firm has also gone into the sand and gravel business.

Mike Hamilton of Mike Hamilton Logging Ltd., Courtenay, BC has “battened down the hatches” financially, but he’s also aggressively gone after secondary markets. He’s created movie sets for film crews, cleared land for hydro, worked on golf course construction and “kept a hand” in other things. “Your crews have to be a lot more flexible today,” he says.

There are three key aspects of business management that Hamilton sees as fundamentals to ensuring that a business survives today? First – “know your costs,” he says, not just on a 30-day or end of the month basis – but pace them daily. Good in-house accounting and production software can help. Hamilton uses ACCPAC accounting software, while productivity is measured on LogHarvester. Others like Beban prefer Conac software. Beban says that “You spend a lot of time entering data.” But, the program will spew a profile such as fuel consumption of a machine, machine productivity, even operator productivity. The complete costs and production of a block can be analyzed.

The second major point Hamilton makes is debt. Going into the downward spiral, those with too much debt simply drowned. Mature companies with equity have been able to float better. But, not knowing costs can erode equity. “Don’t work too cheap and keep the debt down. Contractors are hands-on people and we tend to micro-manage,” he says, adding that’s a talent for survival these days. “You can’t lose touch”.

People Count
An important factor, though, in making it all work is people. “You need to keep a steady and good core crew,” he says. “If you don’t have good people – you are done today.”

For example, he says, the best forecasting program based on productivity figures in the past wouldn’t work without the people. “If you are forecasting 25 cubic meters off a block and at the setting you are only getting 20, it could be you are not using the same crew that you based the first number on.” That 20% drop in production can be financially crippling.

Good crews are made of individuals who are invested with a sense of wanting the company to survive. “That little extra is going to count. You have to find the people who are willing to do that,” says Hamilton. It could be just doing another one-more load at the end of the day rather than quitting 15 minutes before the clock.

All-Wood Fibre Ltd. President Len Legault, in Prince George, says his company is “probably leading the pack” when it comes to a medium-sized forest company hiring a human resources officer. Legault says that in changing and challenging times getting people who will “fit the corporate culture” and “go the extra mile” are worth the extra dollars spent on finding them. He says often companies settle for employees that are not there for the long-haul. The company, with a demo bio-energy plant in Prince George, and a chipping and grinder business in BC and Alberta, is looking to tap into the potential bio-energy wave. “So we want to move forward with the right horses in the stable,” he says.