Craig Tebulte started his forest industry career in the late 1980s, working at the ATCO Wood Products veneer plant in Fruitvale, B.C. It is a company that he is still affiliated with in a big way, but today Tebulte spends his days harvesting logs for ATCO rather than processing them. 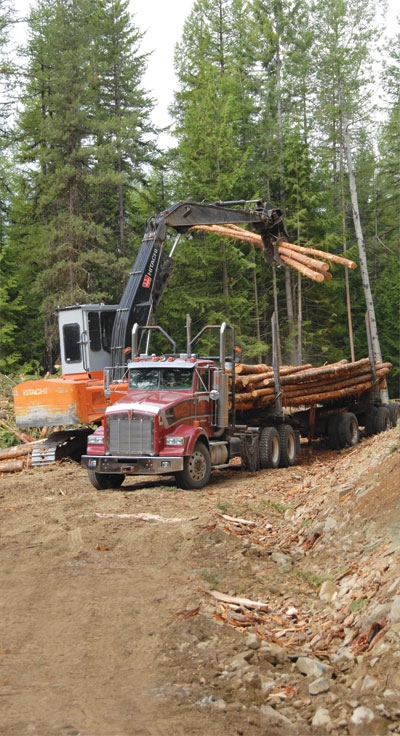 “ATCO gave me a great start in the industry as they took me on at the veneer plant when I was just 18 years old, and I stayed there until I was 25,” Tebulte explains. “When I worked the afternoon shift at the plant, I helped my dad log in the mornings, as he owned a small logging company. I enjoyed being outside and really just wanted to log, so when dad retired in 1996, I bought him out and went full time on the logging side.” 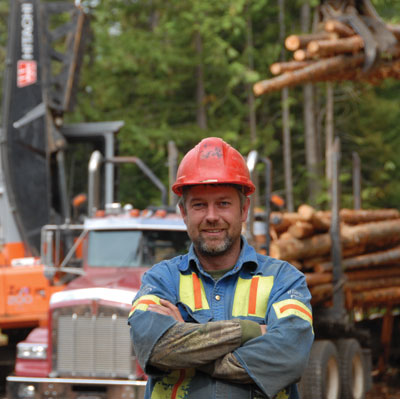 The company Craig acquired from his dad, John Tebulte, came with a Timberjack 450 skidder and a John Deere 550B dozer. It was a good start for a kid from the small southeastern B.C. town of Fruitvale who had the forest industry in his blood on both sides. In addition to his dad’s logging background, his mom, Connie, was a scaler at Kootenay Forest Products in Nelson, B.C., and Louisiana Pacific in Salmo, B.C., and her Dad was a sawmiller in the Crawford Bay area of B.C.’s Kootenay region from the 1960s to the 1980s.

Time to Grow
Once Craig started full time on the logging side, it didn’t take him long to expand the business, and within a year he added a Caterpillar 315 excavator with a grapple that he used for decking, road building and silviculture applications. At the time, his primary customer was BC Hydro and he logged between 30 kilometres and 40 kilometres of power line right-of-ways annually. “That took me away from conventional logging for a while, but it also took me away from home for extended periods of time,” Craig says. “I have four kids, and being gone all the time meant I was becoming a stranger to my own family, so in 2000, I came home and took a full-time contract with ATCO.” 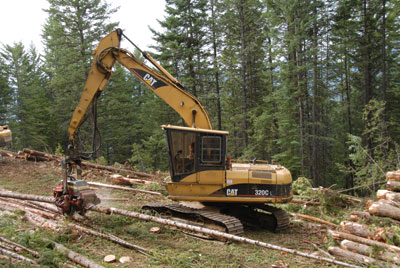 With his solid contract from ATCO in hand and work within about a 100-kilometre radius of home, Craig decided it was time to grow the business again. He still runs just one side, but has built a fleet of equipment that includes a Prentice 630 feller buncher with a Koring head, a Caterpillar 320 with a Waratah 620 processing head, a John Deere 270 with a power clam for hoe chucking, a Caterpillar 535 skidder, a Caterpillar 517 swing skidder for steeper ground and winter logging, and a Hitachi-Deere 200 log loader.

The latest piece of equipment for Craig is the Cat 320 with the Waratah head, which he says was purchased used as a straight replacement for an older model 320 that was also equipped with a Waratah head. “We had a lot of hours on the old machine,” he says. “With the new machine combination, we are achieving better accuracy because of the new head and more uptime with the new carrier.”

Craig purchased the Prentice feller buncher, which was also gently used, in 2009, when he decided it was time to get more of his crew off the ground and into a cab. “We had an older buncher, but we were still doing a lot of hand falling right up until last winter,” he explains. “With new regulations for hand fallers coming into effect in B.C., we decided we could be more productive, and safer, if we switched over to almost 100% mechanized.”

The Hitachi-Deere loader was bought new in July 2007 and Craig says they have been really pleased with it, especially the fuel economy they are achieving with the machine’s thrifty Isuzu engine.

Craig’s work ends at roadside once he loads the logs onto the logging trucks, which are dispatched by ATCO. “We do what we know how to do, which is log, and ATCO takes care of the trucking,” he says.

Keeping Everyone Working
Including Craig and his wife Christie, who is the bookkeeper, the company keeps six people working on a regular basis. “We typically run 10 to 11 months out of the year, so we have been able to maintain a consistent crew,” Craig explains. “Finding guys that want to work in the bush can be a challenge, but we have been lucky in that we have a really committed group of guys that want to be here. Mining has really expanded in this area over the last few years and we can’t compete against the mines in terms of wages, so we are happy that we have been able to keep our crew working as it would be difficult to replace any of them if they left.”

Today, Craig says they work exclusively for ATCO, harvesting logs for the company’s veneer plant and logs ATCO trades with other mills or sells for specialized uses. It’s a two-way relationship and Craig speaks as highly of ATCO as they speak of him and his company.

“Craig does an outstanding job for us,” says Scott Weatherford, ATCO’s CEO. “His operation is extremely safe and productive, and never fails to deliver quality logs on time. He also takes our commitment to environmental stewardship very seriously, which in turn helps us to maintain our Sustainable Forestry Initiative (SFI) certification year after year. He is truly an asset to our operations.”

For ATCO, having conscientious and responsible contractors is one of their keys to success as it means the mill has top quality logs to work with and passes its SFI audits with flying colours. Although working with an SFI-certified operation means a bit more paperwork for Tebulte, he views it as a ticket to the consistent work he needs to keep his crew intact. “I’ve become used to the paperwork over the years as we are also certified by the BC Forest Safety Council and we need to document everything we do for their audits,” he explains. “These days, paperwork is just part of the job for a logging contractor.”

Once Tebulte gave up his power line right-of-way contract and started spending more time in southeastern B.C., the family moved from Fruitvale to nearby Castlegar, which is a larger city that offers more amenities. “Even though I’m less than an hour away from home every day, the hours can still be long, but I really feel I have the best of both worlds,” he says. “I have a job I love and I’m home every night and can spend time with my family on the ski hill, snowmobiling, or just hanging out. It doesn’t get much better than this,” he concludes as a loaded logging truck passes his pickup and heads for the ATCO mill.