Minutes after arriving in the booming town of Cochrane, AB, the challenge facing wood producers like Spray Lake Sawmills was staring me in the face. She was the 13- or 14- year-old girl checking me into my hotel at 10 p.m. She was working the evening shift on a school night because even at $15/hr, Best Western can’t find any adults to take the job. We’re only 30 minutes from Calgary, and in this resource economy, people are the scarcest of all. 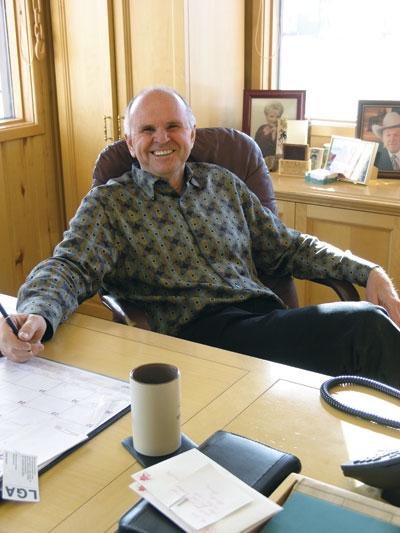 Yes, markets are tough, forcing Spray Lake Sawmills (SLS) to lean heavily on its diverse operations and move away from pure commodity product lines to survive. Just before I arrived at the family-owned and run dimension mill in February, operations here had been scaled back, and efforts re-focused on products that make money, or at least lose less. But over the long haul, SLS’ future will have a lot to do with people.

Or the lack of them, as soft-spoken president and owner Barry Mjolsness and operation manager and son-in-law Jason Quantz explain over coffee at their regular Smitty’s booth. “We’re predicting 100,000 more jobs than people here in Alberta in the foreseeable future,” Barry says, “so it’s going to be a constant, maybe worsening challenge for us – It’s that simple. We’re not remote, but maybe it’s worse – we’re only a half hour from the tightest labour market in Canada.”

Jason gestures through the coffee house window at a line of brand new houses dotting a ridge over town. He adds that the local inflated cost of living doesn’t help staff a globally competitive operation. “With fast food restaurants offering $15/hr and still coming up empty, the bar is set pretty high for a sawmill. And when potential workers find that the cheapest of those houses are going for $400,000, and most for a lot more, it’s hard to maintain their interest.”

The result is a much higher than average mill floor wage, and a revolving staff door. With a staff of some 250 across all operations at peak production, SLS saw a turnover in 2007 of over 200. While key staff, supervisors, and many floor staff are longtime employees, turnover like that keeps everyone on their toes. “Sometimes I think our supervisors feel more like training experts and school teachers than production people,” Jason says with a smile.

There’s little SLS can do to alter demographic and socio-economic trends in booming Alberta, so instead the focus is on short- and long-term solutions they can control. Recruiting and training are as constant a part of the daily business here now as log sourcing is for other mills. SLS gets creative when local labour dries up – which is often. “We have no choice but to look offshore from time to time to get people that will not only take the jobs, but keep them. We have some employees now from countries like The Philippines, and after they work here for two years they can apply for residency. We had a group join us in January, when it was -30 or so. Once they adjust to the weather, they fit right in,” Jason says.

Still, there’s that nagging issue of paying some $10/hr more than sawmills in other jurisdictions, especially in the US. When labour gets this scarce at any price, Jason says you need to start looking at longer-term solutions. One is automation.

Both Jason and Barry spent a week touring Finland’s highly automated sawmill sector in May 2007 (a tour CWP participated in – see CWP June/July 07 or visit www.canadianwoodproducts.ca for our digital issue), and came back with more than a few ideas. Barry cautions that differences in log quality and technical staff training may limit some of what can be done here, yet both sawmillers feel automation has the potential to mitigate at least some HR challenges, as Jason explains.

“I think we need to look at areas of the mill where automation will solve two issues at once – automate an area to reduce staffing needs, but also areas that will reduce health and safety risks, or very tedious tasks,” Jason says. “We saw a lot of remote-controlled log pickers and CCTV cameras in Finland, where the sawline operator clears log jams without even getting out of his seat. When you think of the manpower and potential injuries you can eliminate with that, I think that’s where we need to be going. At some point, Canadian sawmills are going to have to fill in the labour gaps with solutions like that. They exist, so it’s a question of motivation. We’re on the cutting edge of the labour issue here, so we may in the end be more motivated than others.”

Survival First
That’s later. For now, SLS is keeping its head down and surviving. Perhaps its pockets aren’t as deep as some of the larger public lumber companies, yet unlike some of those mills, SLS has a few options to divert product away from the very worst markets. Those options have been hard won, through products and markets developed over a decade or more, during times when most in the industry were happy just to cash in on the good times in lumber markets south of the border. SLS certainly enjoyed the boom markets south of the border. Yet at the same time, it diversified some of its products and byproducts away from the standard fare.

Options today include an established fence post business that Barry says for the time being is working out well. “Of course, next week it could be in the tank,” he says with a smile. “It’s cyclical, and for now we’re lucky it’s not following the same cycle as lumber.”

The mill has also developed a retail mulch business, complete with delivery trucks and marketing aimed at consumer-landscaper audiences. Being close to Calgary’s fast-paced real estate market hasn’t hurt SLS’ Top Spray division at all either. It started off small, but time and effort have created a nice little sideline. “I guess some people must have wondered why we’d bother with this sort of thing back in the ’90s, when making lumber meant making money. It takes a lot of effort, and in some cases, significant investment, and at the time may add little to the bottom line compared to lumber. But it was important for us to diversify. It’s too late to diversify when times get tough, and you need all your cash. And with niche or local markets like this, by the time you start seeing a return, lumber will have recovered anyway.”

Moreover, clients in all of these markets take their own needs seriously, and don’t appreciate fly-by-night operators who sell them product this year, and then ignore them when lumber markets soar again. Another long-term commitment for SLS has been lumber treating, and currently the mill tries to send over 30% of its own lumber for treating. The operation offers both traditional CCA chemicals (industrial, fence posts) and the newer, more consumer-friendly ACQ chemical. In 2005, SLS invested heavily in a complete second plant that allows it to make both product streams in isolation.

“We’ve taken a position that we’re in that market, and we’re in it for the long haul, and so we’re going to do it right,” Barry explains. “It’s not really a business you can run as a sideline – it takes a lot of knowledge, there are serious environmental issues you have to be ready to deal with. It takes a lot of energy, resources, and marketing, and we’ve invested a lot of capital into it. But right now, I’d say we’re glad we did this when we did.”

Still, SLS’ mainstay is sawmilling, and to that end it has injected some capital into its mill in recent years. A two-line mill that was modernized and launched back in 1998 with brand new Optimil small-log technology and USNR-Optimil log merchandising up front, SLS added a third, “really small log” line in 2003 in the form of a used HewSaw with simple banana style infeed. Optimizing the infeed on the HewSaw is one possible project the mill may look at in better times. More recently, SLS upgraded the optimization on its Catech board edger, a joint USNR and Optimil project to double the scanning resolution with new Dynavision scanners, and upgrade to USNR Mill Expert optimization software. The move was long overdue, Jason says. 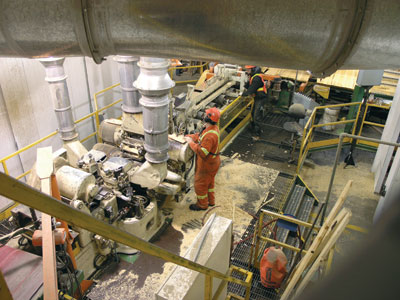 It has also invested in its planer. A vintage Yates planer was replaced by a used, but totally reconditioned Stetson Ross planer from Progressive Machine Industries. “It runs at 1,200, maybe 1,400 fpm tops, which is all we need. It’s easy to get parts and tools for, and it provides an excellent surface,” Jason says of this investment. Further along, SLS has added a Comact multi-saw trimmer. “They’ve got a really solid trimmer,” Jason adds. “They’ve done some very neat things, like the way they arrange the belts so that changing one out takes a few minutes at most. I also like the way that small wheels are used to actively control the trim blocks. It has worked well for us.” 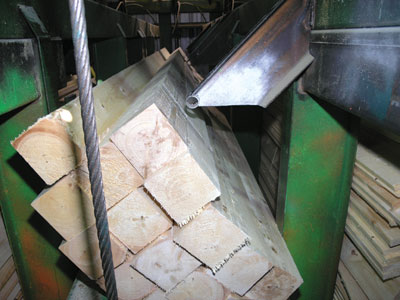 With a solid mill in place, SLS continues to cut the products, and at the pace that makes sense in today’s markets, as Jason concludes. “We’ve got ideas for the future – no shortage. For now, we’re cutting square lumber we can treat or sell, and not too much of it.” And, he might add, interviewing next week’s candidates.