April 30, 2015 - To get a glimpse of the future of sawmilling you could do worse than cruise down U.S. Highway195 to Lewiston, Idaho. There, Idaho Forest Group (IFG) is in the midst of a US$60 million plus upgrade that includes the first HewSaw SL250 3.4 sawline in North America, among the finest operating stations this side of the Atlantic, and a Springer Microtec CT scanning system that may take some of the guess work out of log optimization. 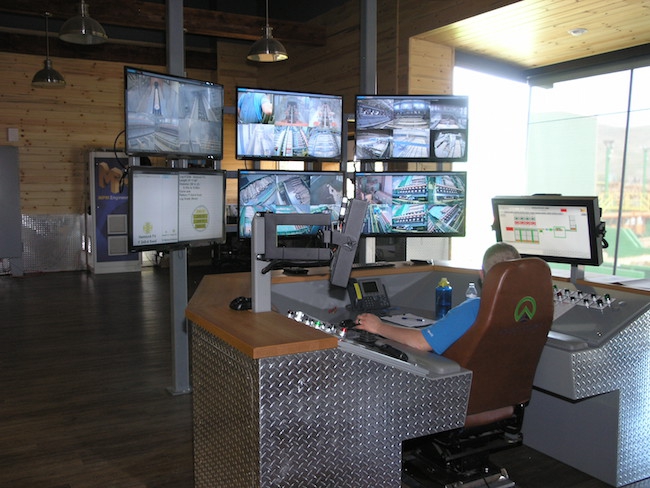 “We’re really trying to promote a culture of innovation running right through the company here, and it starts with the enthusiasm of our owners,” explains Jesse Short, mill manager for the Lewiston mill, which is 300 km south of B.C. “It’s contagious when you see the owners willing to invest in this level of technology.”

The sawline is unlike any other HewSaw lines most North American sawmillers are familiar with, starting with the 28 exterior sort bins in the log yard that feed four bins situated right before the HewSaw. This configuration allows IFG to batch feed the overwhelming majority of its production. Scanning, optimization and controls on the new line were supplied by Surrey, B.C.-based MPM Engineering while the hydraulics for the HewSaw were provided by Bosch Rexroth Canada.

The HewSaw SL250 3.4 is a four-phase breakdown line starting with true shape scanning, which orients the log for a 2R Log Positioner, followed by:

• A close-coupled four-sided curve chipping-canting process;
• A second scanner to optimize the solution for the Cant Saw, which then takes up to two fully-edged sideboards off the left and right sides of the cant;
•A Cant Turner, which turns the cant 90 degrees prior to the Ripsaw, which then curve saws the centre cant with vertically positioned saws followed by optimized sideboard processing that takes two more edged sideboards off of two sides;
•A final Cross Saw unit with horizontal saws that can optionally rip the larger centre stack into multiple smaller products or simply allow the boards to spill onto the landing table as is.

The line marries the simplicity of traditional singe-pass machines with the higher recovery of traditional multi-centre sawmilling of larger diameter logs. It’s also housed in an impressive sawing hall with natural lighting and a cavernous operating room with natural wood construction and video-game style operating station.

“The theory is if we provide a pleasant place for our operators to come to work everyday, they’ll stick around for a long time.”

With technology like this, they’ll be able to stick around as long as they want. Read the full story in the May/June issue of Canadian Forest Industries.