Oct. 13, 2016 - Mike Thibault has been logging his entire adult life, so it’s safe to say he’s well-versed in the challenges and opportunities within the industry. At 18 years of age, Mike entered the industry hand bucking on Williston Lake, north of Mackenzie, B.C., in 1982. 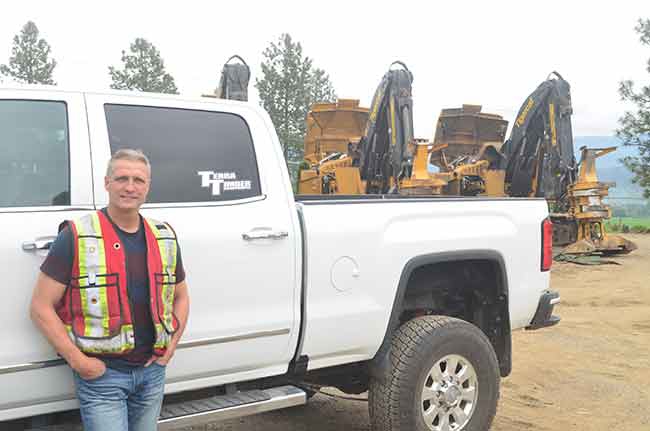 “I was running around getting into trouble when I was 18 years old,” he recalls during a meeting with Canadian Forest Industries in Kamloops, B.C.

To help keep him out of trouble, his parents thought it would be a good idea for Mike to go work for his uncle, who owned and operated a fly-in logging operation on Williston Lake. Over time, he learned how to operate all the equipment in the bush needed to run a successful logging operation.

“To run a company and supervise a crew, you really have to be able to run everything,” Mike says.

When the time came for him to branch off on his own, Mike’s company, Eagle Creek Logging, partnered with another logging contractor, West Lake Contracting in Prince George in 2003.

These companies logged throughout the Prince George area and sold their fibre on the private wood market. They had an annual harvest ranging from 150,000 to 200,000 cubic metres.

“When we did that we were pretty good at it but it was inconsistent… we did it through the economic downturn,” Mike recalls.

Shortly after the downturn in 2010, they entered into an evergreen contract to supply West Fraser’s sawmill in 100 Mile House, B.C. West Fraser had recently acquired a new tenure from Weyerhaeuser, which had shut down its operation in the area in 2008-09. With a new contract in hand, Mike and partners moved their base of operations to Kamloops and formed Terra Timber.

One year later, Terra Timber bought out another contractor and the company became the largest evergreen contractor in the 100 Mile House area, harvesting mostly spruce, pine, fir and balsam for West Fraser sawmills.

“We have close to 20 employees and typically harvest about 300,000 cubic metres per year,” Mike says. “It goes to the 100 Mile House West Fraser sawmill and the West Fraser sawmill in Chasm. We also take peelers to Williams Lake and our pulp wood goes to Domtar… the plan right now is to be the biggest evergreen contractor so we are still viable in the future.”

Holding evergreen contracts offers Terra Timber advantages that some other contractors do not necessarily have.

“With an evergreen contract you can have a long-term plan… get a better return on your equipment,” Mike says.

And since the company can get better returns on its equipment and be profitable, it is able to invest in other areas of its operation to keep it humming along.

“When you have the newest equipment and pay the most money, it’s not hard to find people,” Mike says. “People now phone me up to work because they heard that I have a good company.”

Wages are a significant factor in retaining employees in the logging business, and when Mike started up in the 100 Mile House area, he had to plan out and price his operation carefully to adjust to a new standard for wages.

“Terra Timber pays higher than most others in this area,” he explains. “We put a high importance on long-term employees.”

The fleet
Terra Timber’s operation relies on equipment from a variety of manufacturers and Mike believes in investing in the latest gear to optimize its operations.

The company only keeps one truck for hauling logs and prefers to contract out the rest of the hauling end of its operations.

Mike Thibault and his partners formed Terra Timber in Kamloops

“I’m very concerned about what the next couple of years are going to look like,” he says.

This past May, B.C.’s chief forester Diane Nicholls announced that the AAC levels for the Kamloops TSA would be 2.3 million cubic metres and decrease to 2.1 million cubic metres, effective May 5, 2021. The dropping AAC levels are designed to bring it back in line from prior to 2007, when many AACs in the province had been increased to help manage the mass harvesting of mountain pine beetle-killed trees.

Passing the torch
Mike believes that having a succession plan is another important part of running his business, and plans on eventually turning the keys to Terra Timber over to his son, Mitch.

Mike’s son is already very active in the industry and works as a processor owner/operator, sub-contracting for Terra Timber.

“He started with one processor and now he has two,” Mike says. “He’ll continue to buy the processors and eventually will take over the business.”

By keeping his focus on long-term planning and retaining the best and the brightest crew, Mike is undoubtedly setting the groundwork for his son to have a bright future as a second-generation logging contractor, while ensuring future work for Terra Timber’s employees.