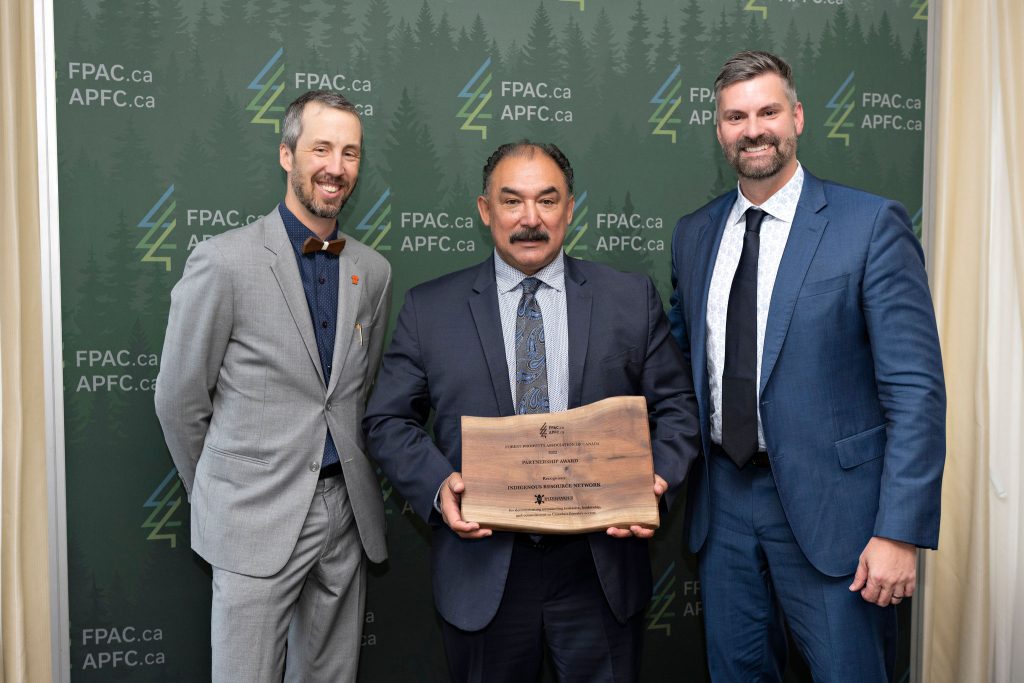 Robert Merasty, centre, was among this year's recipients of the Forest Products Association of Canada's annual Awards of Excellence. Photo: FPAC.

The Indigenous Resource Network (IRN) is a recipient of the Forest Products Association of Canada’s (FPAC) Partnership Award.

Work undertaken by IRN included standing with FPAC against New York and California as they “were attacking our Canadian boreal forest products,” said Merasty.

Last year, both states introduced legislation to protect intact forests as a cost-effective measure to combat global climate. The legislation also pushed for “guaranteed” free, prior and informed consent from Indigenous communities before deforestation took place.

IRN rallied tribal councils and undertook a letter writing campaign in opposition to the legislation.

Canada also took a stand against the NY and California legislation.

Merasty says sustainable and responsible development in the forestry sector helps to bring Indigenous communities out of poverty.

He points to what was accomplished by the nine First Nations that form the Meadow Lake Tribal Council in Saskatchewan. Merasty, former chief of the Flying Dust First Nation, says his Nation had a forest land management lease agreement. In the 1990s it joined forces with the other eight members of the Meadow Lake Tribal Council to purchase NorSask Forest Products, which they operate to today.

The forest industry has created both direct and spinoff jobs for the member nations. It has brought own-source revenue to the communities to improve the lifestyles of its members.

“Our communities have evolved where we have built business expertise, business capacity, so we understand and embrace business,” said Merasty.

The IRN also does work in the oil and gas, energy, fishing and agriculture sectors.

“All we’re about is creating opportunities for our Indigenous people, Indigenous communities to come together with our industry partners in those sectors and to facilitate…responsible resource development,” said Merasty. “In bringing those partnerships to the table…we’re changing the narrative. Really, that’s what the IRN is about.”

Ntityix Resources LP, a Westbank First Nation company in West Kelowna, B.C., was presented with FPAC’s Indigenous Business Leadership Award, which is given in partnership with the Canadian Council for Aboriginal Business. The award recognizes Indigenous entrepreneurs who exemplify business leadership through exceptional environmental and safety performance and the delivery of high-quality products and services.

Dave Gill, general manager of forestry with Ntityix Resources, says Indigenous communities were re-taking control of their lands, making decisions that reflected their values, and forging partnerships with industry neighbours.

“For Ntityix to win this award reflects the values of our community, our company, and the hard work of our staff and the will of our partners to make a difference,” said Gill.

FPAC and the Canadian Council of Forest Ministers combined to recognize Neepin Cook, Sarah G. Dixon and Jordan Germain with the 2022 Skills Awards for Indigenous Youth. The award is presented to Indigenous young people who have indicated skills development and career aspirations in the forest products industry.

Cook, 18, is from Misipawistik Cree Nation in northern Manitoba. She recently graduated with honours, as the valedictorian and received the Governor General Award from the Grand Rapids High School. This September, Cook started the Environmental Science program focusing on forestry policy management at the University of Winnipeg.

Dixon, 21, is Secwepemc and Nisga’a of the Esketemc First Nation within the Secwepemc Nation in northern BC. She was first introduced to the natural resource industry through her involvement with Outland Youth Employment Program, participating in the program as a ranger and then as a crew leader in training, acting as a mentor to Indigenous youth. She has been a keynote speaker at various conferences, including the BC Natural Resources Forum and The Forward Summit. Dixon is now pursuing a Bachelor of Arts in First Nations Studies with a double minor in history and political Science at the University of Northern BC.

Germain is a member of the Pekuakamiulnuatsh First Nation in the Saguenay–Lac-Saint-Jean region of Quebec. He entered the Forest Technology program at Cegep de Chicoutimi and started working at the Resolute Forest Products mill in St. Felicien, which gave him the opportunity to participate in three internships with the company. Now, he is only two years away from earning his bachelor’s degree in Forest Management and Environment at Laval University.

FPAC is an organization that advocates for Canada’s wood, pulp, and paper producers nationally and internationally in government, trade, and environmental affairs. Annual revenues for the forestry industry exceed $75 billion. Canada’s forest products sector is one of the country’s largest employers operating in more than 600 communities, providing 225,000 direct jobs, and over 600,000 indirect jobs.

Shari Narine is a Local Journalism Initiative Reporter with Windspeaker.com.