Anew curve sawing canter bull from Quebec-based PHL Industries is at the heart of a second sawline at Scierie co-operative Saint-Elzéar, located in Bona­venture on the province’s scenic Gaspé Peninsula. Forintek has already been in to evaluate the new equipment, called CCB6, which fired up in August 2005, and has measured its recovery at 3.4 m3/1,000 bdft (295 bdft/m3) in the mill’s diet of 6-in softwood, which includes a fair chunk of marginal fir. This is apparently close to 1 m3/1,000 less than the average straight-sawing canter running in similar wood, which is indeed good news for a sawmill whose production is seriously restricted by the available volume of wood, as is the case with Saint-Elzéar. 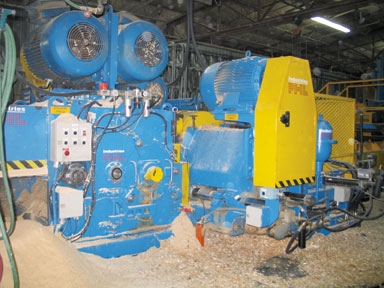 The inventor and developer of the PHL CCB6 is forestry engineer Côme Bureau, who worked for over 12 years for CRIQ (Quebec Industrial Research Centre) evaluating positioning systems. Bureau proposed his curve sawing project to a number of machinery manufacturers, but it was PHL Industries who first saw the potential, despite the fact that the supplier did not have any curve sawing gear in its line-up at the time. It did not take the supplier’s engineers long to create the first prototype. While PHL may have come to the curve sawing game late, it feels the delay has allowed it to take an approach more in line with its overall design philosophy – simple and cost-effective.

For its part, Saint-Elzéar is no stranger to using curve sawing to get the most from its challenging wood supply. Its small-log line is a modified HewSaw R200 that has been running for a decade now.

Centre cant
According to Bureau, the difference is in the CCB6’s infeed system. The bull edger’s cutting tools are fixed, and the infeed reference point is the centre of the cant. The infeed can shift either left or right, while chain spacing can range from 2.25 to 26 inches. The optimization, handled by Quebec’s ProLogic+, is always in reference to the centre point, and allows considerable flexibility in cutting pattern and recovery choices.

The CCB6 uses standard cutting tools for what the mill calls excellent chip quality. The mill uses 0.140 circular saws that work well even on its frozen wood. Curvature is controlled in two ways – by the overall length of the system, and by the amount of movement at the infeed. The mill has decided to limit it to 2 5/8 inches of curvature over 16 feet. The mill notes that regardless of the positioning they ask for, the reference point for the simple mechanical infeed system is the same – centred in relation to the center of the cutting tools, which never move. As a result, maintenance is kept relatively simple, chiefly standard changing and sharpening of the blades, swapping out of the chipping tools every 2.5 weeks (single shift), and work on the chain annually. 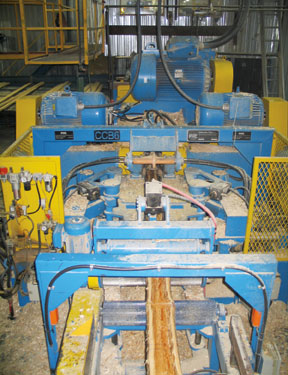 The twin band and log turner on the large-log line are also from PHL. The Forintek study cited above also noted that the mill’s log turner up front at the canter is among the most precise ever tested by the institute. Of course, its relatively tame speed (400 fpm) as well as the size of the logs play a role here as well.
As for optimization on the new CCB6, Bureau says this first collaboration between ProLogic+ and PHL has worked very well.

The CCB6 takes up 144 ft2 of floor space, and in retrofits the supplier guarantees that the system will be up and running within 15 days of the start of the install. PHL has one machine to handle a range of product lengths, and both 6- and 8-in models for the time being. While a few minor modifications have been made to this first model since start-up, the mill adds that visitors for the most part are impressed both by the system’s compact design, as well as its aggressive price – $650,000 on its own, although mills would be wise to budget between $900,000 and $1.5 million for optimization, controls, design and installation all tolled, depending on their starting point.

Residual problems
Still, making better and longer lumber is only part of the battle for Gaspesian sawmillers. The isolated region faces logistical challenges for all its products. Shipping finished lumber is costly, but then so too is getting by-products to markets, all of which are far away in the south and west of the province. 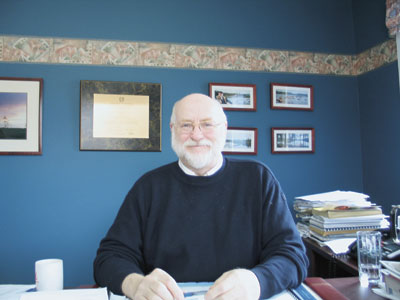 “Clients for our by-products – chips, sawdust, planer shavings and bark – can take advantage of our distance by demanding low prices,” explains general manager Alain Tremblay. “Despite that, some 5,000 to 6,000 tonnes of our production is in sawdust that we can’t sell. If we can’t resolve that over the next six months, we may see it limiting our production for purely environmental reasons. The current lumber market doesn’t help, nor does the fact that our wood supply (fir) contains a high level of rot. It all combines to make our current situation challenging to say the least. It has become clear that we need to both improve the recovery of our sawmill, as well as create a more value-added outlet for our wood, and we are looking.”

The recent upgrades to the second line, and other investment has allowed the mill to dramatically improve its productivity and recovery, which is a good start. Current production, which is limited by log supply after a major fire swept through the area in the 1990s, is around 30 million bdft. This plays a factor in the kinds of investment the mill is willing to make, as well as how it is run.

“Since we don’t have a lot of volume, there is no sense in running the mill at full speed. We can’t just make all our production in six month, and then put all our workers on the street – it’s not a long-term strategy. We look at production efficiency, sure, but a bigger payback comes from getting more lumber, and higher value, from the same resource, and that’s what we’re doing.”

Also explaining the latest investment is the nature of the local wood supply. The Gaspé forest offers almost exclusively trees with considerable sweep. With the curve sawing system in place, the mill is obtaining a much higher volume of full-length (16 ft) product. In the east coast random length market in which the mill sells most of its products, this greater proportion of full-length lumber is paying off in higher average selling costs, and a quick payback on the curve sawing system.

Saint-Elzéar has made other investments in the mill in recent years. To handle its varied markets and products, the mill has added a new 100-bin sorter, also from PHL Industries. For instance, in its current markets, 2×5’s are a popular item. It also produces 1×2’s as a recovery item, and makes special orders of 3×3 and 2×2 squares on its other sawline, the HewSaw R200. The new sorter is preceded by and fed by a Gemofor GIXI E 4000 lug loader, Autolog scanning/optimization, and a Gemofor GoBot 1200 multi-saw trimmer. Overall, 90% of the mill’s production is in 2×3, 2×4, 2×5 and 2×6, along with kiln stickers.

Speaking of drying, the mill uses a wood-fired system that consumes bark from its own Carmanah-Fuji King and Forano (ring) debarkers. The Fuji King drum-style debarker is a rarity among sawmills this size, but like much of the mill’s more innovative gear was selected by the mill’s Jérôme Laplante. It allows the fibre-starved mill to accept a wide range of logs up to 20-in when available, a bonus for a mill that can ill afford to turn away any fibre.

Related
Doing Less with More
Outrunning the Beetle?
Strategic Sawmilling
Plunging into the Nordic Business and the Icy Baltic