March 26, 2018 - In a group of 13 saw filing employees at Interfor’s Adam’s Lake lumber division, only three are under 55. That’s a pretty clear statistic showing that this highly skilled and technical trade of saw filing desperately needs new faces. The rapidly aging workforce is retiring faster than new recruits are coming in and more young people entering the trade may be the key to its survival. 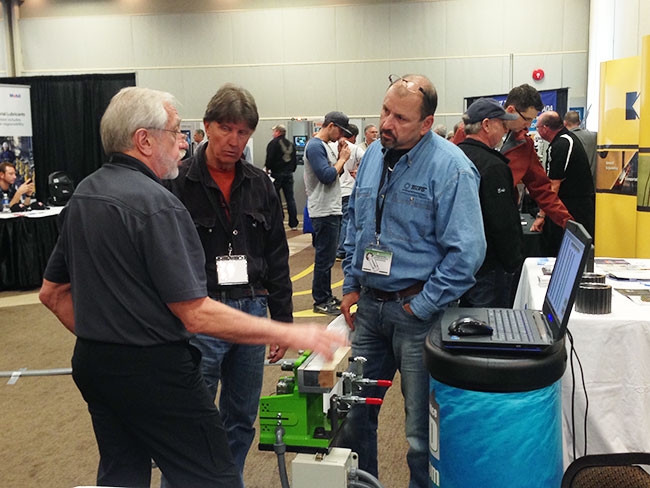 Last year’s BC Saw Filers Association convention brought together 140 filers from across the province to take in new technology and learn about developments in the trade. In a group of 13 saw filing employees at Interfor’s Adam’s Lake lumber division

“We haven’t pushed hard enough to get more filers in the training, to make it attractive, to bring the young people in,” explains Martin Vatkin, president of the BC Saw Filers Association and head filer at Adam’s Lake. “And that’s a combination problem between the filers, the mills, management, unions, we just haven’t done enough to recruit.”

The association’s membership numbers are currently sitting at around 235, and Vatkin says that’s a static figure as many members are retiring.

Vatkin, who is a 43-year veteran, traced the roots of the problem back two decades saying companies should have started actively recruiting back then to ensure a stable future for the trade.

“I think a big thing is when kids are in high school they don’t even realize that we’re a trade and that we exist. We don’t advertise well enough, we don’t go into the schools to promote, which is kind of where we should start because you want the young people moving into these kinds of trades,” he says.

Vatkin says upgrading the Thompson Rivers University saw filing school in Williams Lake, B.C. with better equipment and a larger facility would be a positive step toward enticing youth to join the trade.

“It’s very mechanical, highly technical, lots of thinking, very rewarding, and it’s on average, the highest paying job in a sawmill,” Vatkin says. “For a benchman, which is the top of our trade, they make just over $43/hour, which is pretty decent money.”

Last year’s BC Saw Filers Association convention brought together 140 filers from across the province to take in new technology and learn about developments in the trade.

Besides seeing more young people, Vatkin says there also needs to be easier access into the trade without seniority being a barrier, and a better grasp of modern robotics and technology, which will be showcased at this year’s BC Saw Filers Association convention. The convention takes place April 26 to 28 in Kamloops, B.C.

Vatkin says autobenches and robotics is the way saw filing has to go.

“We have a wide discrepancy in the industry itself of what [technology] mills have and what mills don’t,” Vatkin says. “For the industry and for the filers, it’s better to get more modern technology into the filing rooms.

“I think the whole approach we’re starting to get this year is people are starting to understand it’s not just the filing aspect of it, so it’s not just sharpening the saws; it’s maintaining the equipment that the saws run into. That’s probably the biggest focus of the convention this year.”

Vatkin says he loves the challenge of coming up with innovative ways to make saws run better, cut costs and be more productive. He also enjoys passing down his knowledge.

“Seeing the apprentices become passionate about what they’re doing, that’s probably the most rewarding thing there is,” he says.