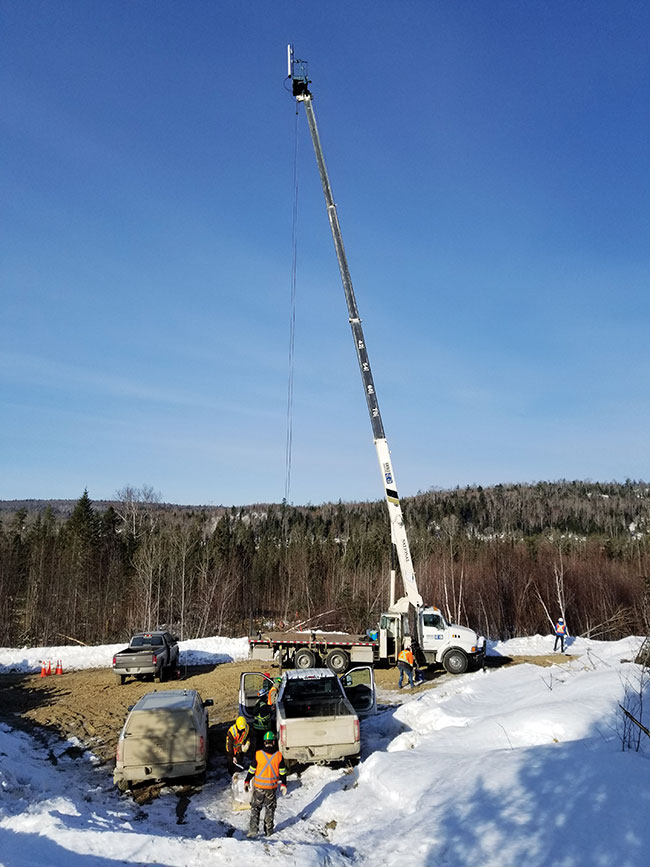 Resolute Forest Products, in collaboration with FPInnovations, is studying ways to develop cellular networks to provide Internet access in the forest as part of a Forestry 4.0 initiative to boost operational efficiency. The result could mean some areas of forests in central Canada offer connection to 5G networks before most Canadian cities do.

The idea, which many other forest industry players are also trying to implement, comes from the mining sector, where several sites located in isolated areas have developed their own remote Internet access capabilities.

However, according to one expert, forestry companies face broader challenges. “A hole doesn’t move, but forest operations do,” says Martin Lambert, a senior telecommunications and special projects analyst at Resolute Forest Products.

Resolute Forest Products successfully completed cellular coverage tests in the Haute-Mauricie region in March, teaming up with FPInnovations and Ambra Solutions, which specializes in the deployment of industrial communications networks in remote areas. The results exceeded expectations. “We were expecting coverage along a radius between two to three kilometres,” Lambert says. “But we achieved coverage of between eight to 10 kilometres.”

The work is a natural extension for Trois-Rivières-based Ambra Solutions, which was founded 12 years ago. “We started by doing fleet management in open pit mines in Fermont,” says Éric L’Heureux, the company’s president and founder. “Today, with 88 kilometres of mine (tunnels) that use our technology and another 50 kilometres to be installed shortly, we are the world leader, with clients in Mexico, Chile and South Africa.”

Ambra Solutions specializes in deploying networks in areas in which major players such as Bell and Rogers aren’t interested. However, to do that the company must obtain cellular spectrum coverage licences at auction – a costly and arduous process.

The shortage of suppliers in remote areas and the difficulty in obtaining cellular licences are the biggest barriers to expanding Internet access in the forest, says Francis Charette, scientific lead for the Forestry 4.0 initiative at FPInnovations. 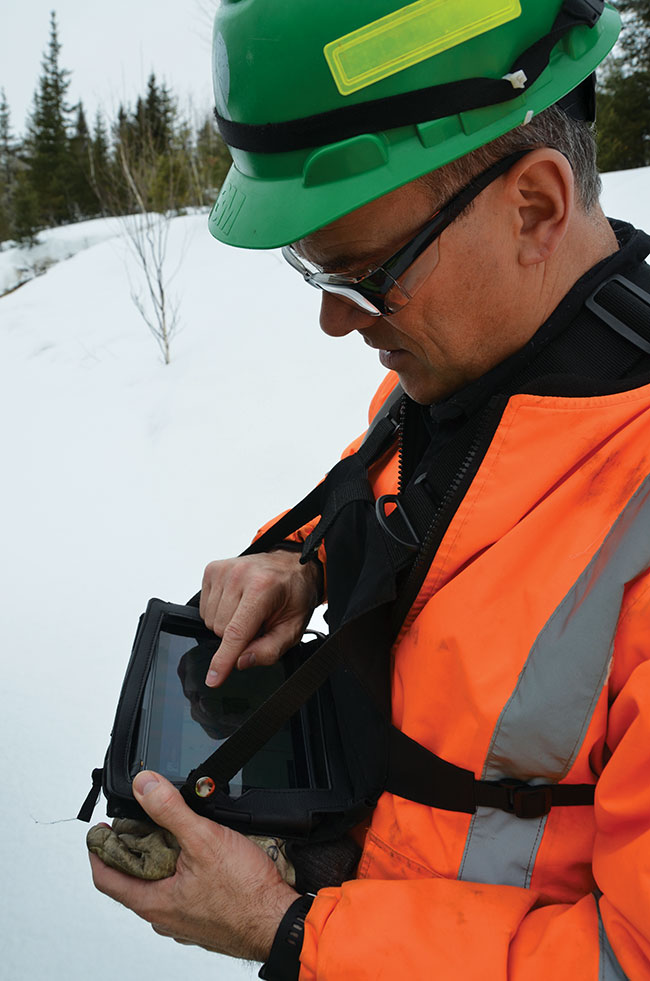 “LTE has proven to be one of the best technologies for covering large forest areas,” says L’Heureux, adding that such high quality telecommunications is highly sought after in the sector.

Using towers is a must to operate this kind of cellular network. Resolute, which already has about a dozen microwave towers installed in the Lac-Saint-Jean area, believes that it has the infrastructure in place to deploy such a network by adding additional mobile towers similar to those used by the U.S. Army, says Pierre Cormier, Resolute’s vice-president of forestry and forestry operations for Quebec.

To cover larger areas, Resolute’s existing network would need to also deploy intermediate “backhaul” relays to port the signal from operations over to the private or public cellular network, says Maxime Tanguay Laflèche, who is responsible for trials at FPInnovations.

In fact, the tests conducted in March focused on this precise capability. “We wanted to quantify different variables to determine how, for example, tower height, signal power and nearby trees and mountains influenced the coverage,” Tanguay-Laflèche says.

“We want to first demonstrate that it’s possible,” Cormier says. “After that we want to initiate discussions with various levels of government to deploy such a network for industry, but also to make better use of the territory.”

It will thus be possible to determine if, for example, a tower can deploy a signal in a five kilometre radius rather than three kilometres, adds Ian Michaelson, senior researcher at FPInnovations. This data will make it possible to answer the most important question: how much will all of this cost? “If it costs $10 per cubic metre we won’t have a business case to implement the technology,” he says. 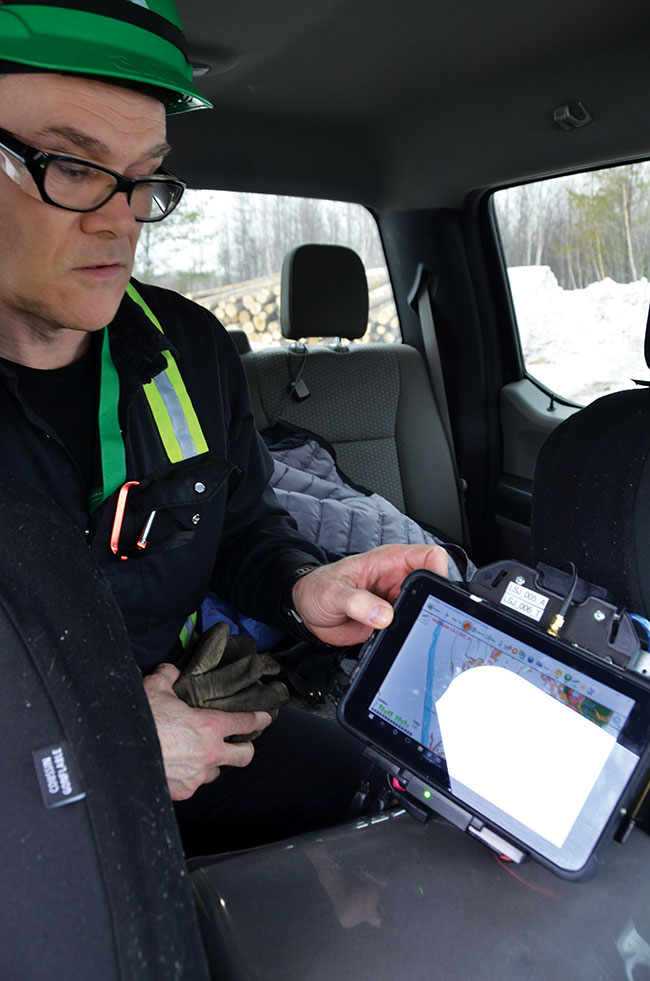 Stéphane Larocque, a geomatics technician at Resolute Forest Products, explains how Lidar data has transformed how they perform forest planning and harvesting.

If high-speed Internet access proves impossible, FPInnovations is also evaluating a low-cost telematics system that can transfer various machine-related data – such as location, fuel and wood levels – over a low-speed cloud-based network.

Once a cellular network is in place, Resolute can then connect to their internal Internet network simply by using their own SIM cards. “It will be a simple extension of the existing network,” L’Heureux says, noting that access to 4G or 5G networks opens the door to wider use of the Internet of Things.

At that point the possibilities become almost endless, Cormier says. “Within five years we want the machines to be able to talk to each other and to be connected to processing facilities,” he says. “We will then have the information we need in real time to plan our harvesting based on our clients’ needs.”

The network will also facilitate real-time diagnostics and problem solving through a simple video call, which the mining industry has been doing for several years, L’Heureux notes.

The next several years will also likely see the emergence of semi-autonomous harvesters. Already global machine manufacturers are introducing remote-controlled options. It seems the future of forestry is already at our doors.