Apr. 24, 2013, Elmia, AB - “All the hardware is available and the corresponding system of handling unit loads is already standard in many other industries,” Lennart Olving explains.

The invention involves using unit loads to simplify handling and thereby condense and shorten the entire chain from the harvesting site to the final destination. With a unit load carrier, individual logs can retain their harvesting data all the way to the customers throughout the transport chain.

Over the past 30 years Olving has worked in both the mechanical engineering and pharmaceutical industries. He has specialised in production flows using the lean model, a method that increases efficiencies by removing bottlenecks and minimising waste. Maria Drott is a forest owner and she and Olving developed the concept together in their joint company Green Wood Logistics AB.

“We thought about all the timber that sometimes spends months lying by the roadside before being driven to the customers,” Drott explains.

Leaving products to sit for so long violates one of the basic principles of the lean model. Storage, even on the roadside, costs money. The longer it takes before the logs are industrially processed, the greater the threat to their quality.

In the analysis that is the foundation of their invention and their company, Olving and Drott discovered that their solution can give savings of up to about 15 euro for every cubic metre solid volume excluding bark of timber felled in the Swedish forest.

Currently, the forest is first inventoried and valued and the trees are then felled and measured in the harvester head.

“The harvester’s computer gathers masses of information about each log,” Olving explains. “But the link between the data and the log is lost the second that the log is put on the ground.”

In the next step the forwarder operator does a visual inspection of the logs, sorts and loads them, takes them to the landing, and then does a further sorting while unloading them on the roadside.

A logging truck fetches the sorted timber and delivers it to the customers, where log scalers assess the incoming shipments. Despite this multi-stage sorting process, some of the timber ends up in the wrong place, with pulpwood at the sawmill, saw timber at the pulp mill, and so on.

This information loss is a known problem. One of several solutions is to mark each individual log while it is still in the harvester head. The markings are then automatically read during the next transport stage.

“But with even individual marking of each log, handling damage is still a problem as is the length of time the timber spends lying by the roadside,” Olving says.

Green Wood Logistics’ patented solution is based on a load changing load carrier. This can be used in the same systems and on the same trucks as those used to transport gravel, wood chips, etc. Instead of using a load bed, stackable load carriers with folding bunks are used. The invention has been named Lean Wood Supply System.

Green Wood Logistics AB has built up a network with a high level of diverse skills. The big challenge is to make the flow more efficient. This will call into question many routines and conventions in the forest industry. But both inventors are hopeful that this is possible.

“Productivity in the forest industry has stood still in recent years,” Olving says. “According to our initial calculations our method can save over a billion euro per year and thereby improve the industry’s profitability.” 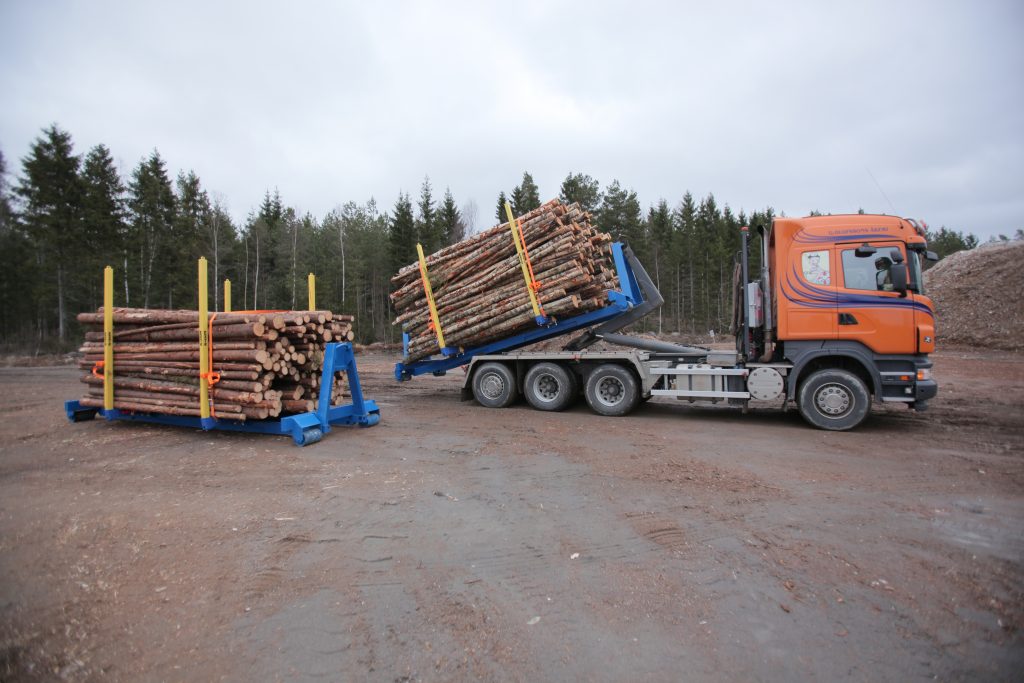 Inventors Lennart Olving and Maria Drott have developed a revolutionary patented total concept that will be presented at Elmia Wood. Inventors have created a new timber transportation system that could save companies over a billion euro.
Print this page