Feb. 26, 2018 - In the Rouge-Matawin wildlife preserve, a crew of young foresters is busy at work in a predominantly softwood sector about an hour’s drive away from Saint-Michel-des-Saints, Que. An operator in new six-wheeled Tigercat 635G skidder that arrived a few short weeks ago is hauling a heavy load of tree-length wood through swampy and steep terrain. 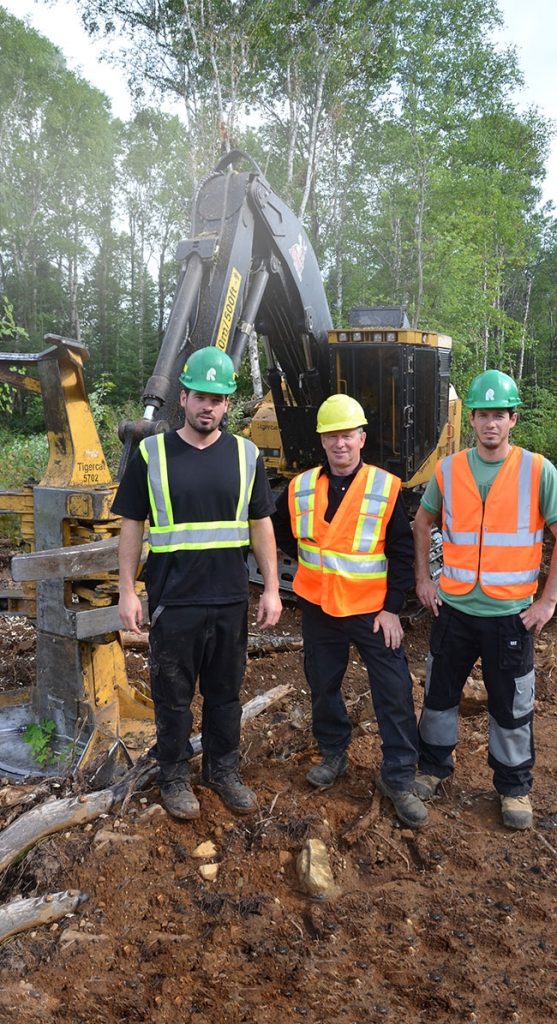 Richard Lasalle invested in machinery to make room in the business for sons Benoit and Éric. Both sons are successfully ensuring the future of the company by taking business opportunities available to them.

“If we had used a four-wheeled skidder, we wouldn’t have been able to harvest those trees,” says Benoit Lasalle, who owns Forestiers RBE Lasalle along with his brother Éric and father Richard. Based on the ruggedness of the terrain, the feller buncher operator will decide whether a four- or six-wheeled skidder will be used to get the wood, Benoit says.

The 635G skidder is a new machine for Tigercat and the Lasalle’s is the first of its kind to be delivered to Quebec. These new machines are not for all contractors, says Jean-François Chrétien, sales rep for Wajax, a Tigercat product distributor. The team at Forestiers RBE Lasalle is serving as an equipment tester to help improve the new iron.

“The 635 is still not perfect,” Benoit says, after using it for five weeks. “It still needs a few tweaks here and there since it doesn’t pull enough, but I am confident that it will soon perform to its fullest. Tigercat listens to what we have to say and does everything they can to solve problems.”

Every two years, Richard, Benoit and Éric, along with a group of contractors, pay a visit to the Tigercat manufacturing plant near Toronto to get a look at the new machines developed by the company.

During these visits, Tigercat’s CEO Ken McDonald himself greets the loggers. When Benoit voiced a problem with his differential, McDonald invited him into his office to discuss the matter further. “In 20 minutes, everything was sorted out, since he quickly decided to replace my machine’s components,” Benoit says.

Stories like this explains why the relationship of trust between Forestiers RBE Lasalle and Tigercat has lasted since 1995. At that time, to prepare for his two sons joining the company, Richard purchased the first Tigercat machine sold in Quebec – an 853E feller buncher. The buncher has since clocked more than 70,000 hours. “We still use it today to open roads,” Richard says. “It saves us from having to move our other two feller bunchers.”

Richard soon after expanded his fleet by purchasing a second harvester, then a skidder and a delimber. Each new machine served to make room for Benoit, who graduated with a diploma in construction equipment mechanics in 1999, and then for Éric, who received the same education.

Today, the Saint-Michel-des-Saints-based forest company owns three tree-length Tigercat feller bunchers (two 870Cs, one 860 and one 853), three Tigercat skidders (635G, 630E and 630C) and four delimbers (three Denharcos and one Forespro) mounted on a CAT (320, 322 and 324) undercarriage. To cut the trees, Forestiers RBE Lasalle uses Gilbert felling heads, but also owns a Tigercat felling head, sold with one of the 870C fellers.

Why have they stayed with Tigercat all these years? “Customer service accounts for 80 per cent of our decision when we choose a manufacturer and the company has always given us good service,” Benoit says. He also appreciates the fact that the machinery is made in Canada.

In recent years, Forestiers RBE Lasalle has continued to expand its fleet and diversify its services by purchasing a transport truck and a semi-trailer. “If opportunity knocks, we are ready to answer,” Benoit says.

The company harvests between 175,000 and 200,000 cubic metres per year. Now delivering wood directly to the mills, RBE sends softwoods to the Saint-Michel sawmill, and hardwoods to local sawmills, including Produits forestiers Lachance and Commonwealth Plywood. Small trees go to Domtar’s pulp mill in Windsor, Que.

Richard Lasalle invested in machinery to make room in the business for sons Benoit and Éric. Both sons are successfully ensuring the future of the company by taking business opportunities available to them.

Up-and-coming youth
Out in the woods, it’s not just the fleet of Tigercat machines that impresses. Jérémie, a 19-year-old, is at the controls of the delimber, Jonathan Delorme, 32, skillfully drives the new skidder, and Eric Plante, 38, operates a feller buncher. “Our average age is well below 40,” Éric says. Several experienced veterans play a key role in the team, he adds, which can number 25 employees at peak season.

Building a young and dynamic team is not something you can just improvise, Benoit says. “We try to always have two young trainees on our team,” he says. “If you never train new people, you will end up with no one who knows your trade. You have to show your trade to several young workers in order to find one you can trust. Whether they are newly minted workers or resourceful youth from the area, we must take the time to properly train the new generation so they know what to expect of the work.”

Investing in quality of life
With harvesting contracts in the Côte-Nord, Haute-Mauricie and Abitibi regions over the past 10 years, the team at Forestiers RBE Lasalle have travelled far to find work. “It was tough and wasn’t what I wanted, especially with young kids, but we knew we had a good business model for Saint-Michel,” Benoit says.

When Jean-François Champoux approached them to invest in the local sawmill, the contractors quickly seized the opportunity. “It was a good way to participate in stimulating the economy while guaranteeing work close to home,” Benoit says. The decision has improved his quality of life. Since the mill restarted, workers rarely drive more than an hour and are home every night.

“It didn’t make sense going to work elsewhere, especially when you live in a forested area like Saint-Michel,” Richard says. He has witnessed several attempts in the past 40 years to get the local mill going again.

To maintain the mill’s production, which can reach 200,000 cubic metres per year, the contractors want to continue renewing their fleet of machines. The next investment is a feller buncher, likely one from Tigercat’s new D series, which has more power but is still fuel efficient.

While nothing can be taken for granted in the world of forestry, the reopening of the local sawmill and the enthusiasm of its employees suggest a very promising future for Forestiers RBE Lasalle.