June 21, 2016 - Don Bahen has been logging for more than 20 years, and enjoys the challenges of coastal logging on Vancouver Island. 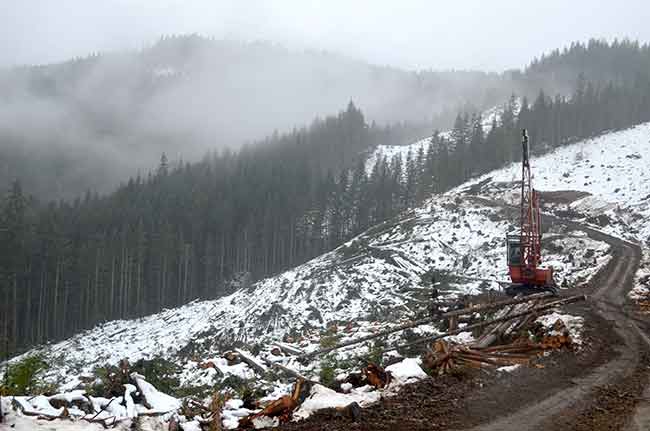 Island Fibre has logged slopes as steep as 65 degrees in short pitches and is planning to tackle steeper slopes in the future. Don Bahen has been logging for more than 20 years

He originally got into the business logging in the northern B.C. Interior in 1996 as a partner with Tahtsa Timber.

“It’s safe to say we learned a lot from each other – I was fairly good in business and Klaus [his partner] was really good with the machines,” Bahen says as we make our way down Cowichan Valley Highway towards one of his logging operations in the mountainous terrain of the Mesachie Lake Region, about 35 minutes outside of Duncan, B.C.

Bahen’s company, Island Fibre Ltd., does about 80 per cent of its logging in this region with most of his operations harvested on private lands.

Bahen logged in the northern Interior until selling his stake in the business in 2006, leaving the industry for a few years.

In 2009, he decided to get back into logging and branched off on his own and set up his own logging operations on Vancouver Island working for Timberwest, Western Forest Products and Teal-Jones. He says one of the biggest benefits of making the change to coastal logging is the ability to log year-round, although his company has lost a few months of operating due to excessive heat and forest fires.

“We’ve got really dense wood here,” he says as he points out a section of thick forest on our drive up a steep sloped, icy mountain road towards one of his company’s logging crews. “We get 450 to 1,000 cubic metres per hectare out here. It’s a damn good thing, too.”

As is the case with many of B.C.’s coastal loggers, the majority of the blocks Island Fibre harvests are on steep terrain, which provides a variety of additional challenges and costs.

“We’ve logged slopes as steep as 65 degrees in short pitches, but generally the block averages 30 per cent slopes,” Bahen says. “I didn’t have a clue about steep slopes when I got here, now I do. Compared to the island, the Interior is a piece of cake. This is rugged ground. It’s a lot steeper here.”

To help Island Fibre manage its harvesting operations on steeper blocks, now and in the future, Bahen recently took delivery of the first EMS tethered winch system for harvesting to come to Canada from New Zealand, and will also be taking delivery of two ClimbMAX steep slope harvesters this summer.

“I looked carefully at all the steep-slope machines out there and decided the best fit for our company was the ClimbMAX, which we have two on order, and the EMS winch machine sold by C & C Logging out of Kelso, Washington,” Bahen says. “I feel that other contractors will find what works for them, we all have different needs.”

Blast-off!
Steeper slopes aren’t the only accessibility issue for harvesting blocks in the Mesachie Lake Region. The building of resource roads to transport equipment and logs throughout the region often requires blasting out large sections of rock, which adds additional costs to the operation.

When he was building roads in the northern B.C. Interior, Bahen says it cost him close to $10,000 per kilometre of road. In the mountains on Vancouver Island, where blasting is often required, this number can go as high as $70,000 per kilometre. About half of the additional costs come directly from the blasting and the equipment involved, while the other half stems from additional man-hours required for building and maintaining the roads.

Latest and greatest
When it comes to the equipment for his operations, Bahen strongly believes in having the latest technologies available.

His bush fleet is an impressive collection of the latest offerings from a variety of manufacturers, with the majority of the models no older than 2013.

Bahen says that knowing when to buy and sell equipment for your fleet is an important part of running a profitable operation.

“I’m 55 years old, I’ve been at this a long time and I don’t have any payments to make,” he says.  “As the [forest] resources dwindle, the stronger operators will survive.”

Island Fibre has logged slopes as steep as 65 degrees in short pitches and is planning to tackle steeper slopes in the future.

A family affair
Several members of Bahen’s family also work in the forestry sector, including his wife, Mary DeLury, who is a registered professional forester (RPF) and the general manager for Island Fibre.

“I manage office administration, safety, training employees, technology advances, employee relations, etc.,” DeLury says. “Don provides the vision, I take care of the details. We are both very hands-on and work well together.”

DeLury got her start in forestry tree planting at 18 years old in the interior of B.C. and moved up into a supervisory role five years later.

“I really enjoy being outside so I chose to pursue a career in forestry,” she says. “I got my forestry degree and then became a professional forester. I had a forestry consulting business for a number of years with my business partner, Ron Zayac. We worked with Don and Klaus at Tahtsa Timber on many projects. Don and I combined forces at Island Fibre to be more focused and provide some flexibility in our lives. We work well together because we think a lot alike and have different strengths.”

“She has also done a fair bit of pilot work with the BC Forest Safety Council,” Bahen adds. “It really helps to have an RPF on staff.”

Bahen also has a 24-year-old son, Matthew, who works in the industry as a processor operator.

Despite all the challenges that coastal logging has presented Island Fibre – from steeper slopes, to blasting and increased safety measures – Bahen has enjoyed the transition from logging within the northern Interior to coastal logging.

“This is adventure,” he says. “This is logging.”