March 30, 2017 - For years Richard Coyne contemplated purchasing a winch assist system for his small logging operation on Vancouver Island. A trip to New Zealand – the motherland of tethered logging – sealed the deal for him. While there, Coyne learned best practices when it comes to safety, training and machine maintenance. 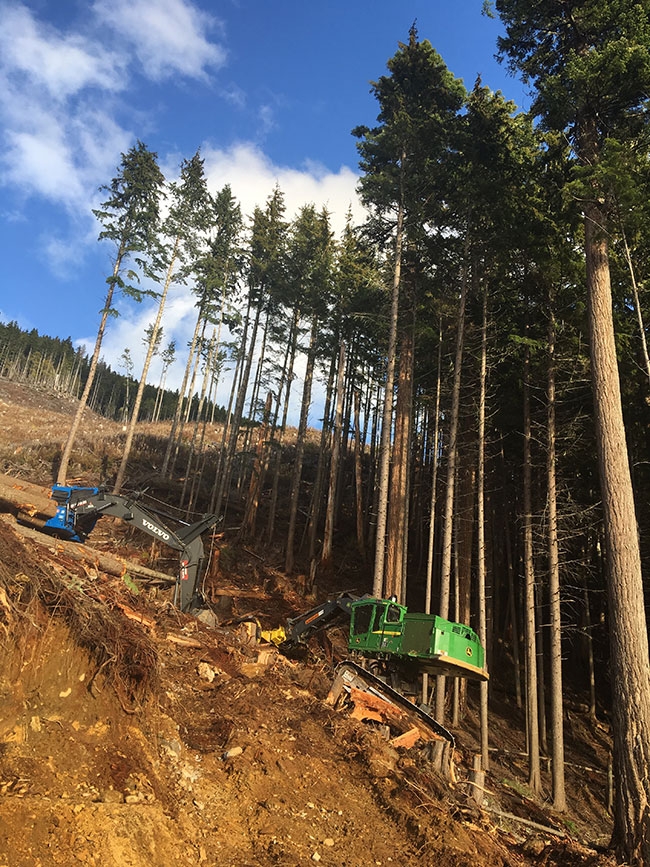 In July, Coyne – the owner-operator of Hyde Creek Logging Ltd. – began operating with a Falcon Winch Assist, built by New Zealand’s DC Equipment, purchased from Canadian supplier Great West Equipment. The winch is fitted to a Volvo 3329 excavator. Coyne’s is the first operation in Canada to use the DC winch.

Hyde Creek Logging is a four-man harvesting operation that bunches between 150,000 and 200,000 metres a year for Western Forest Products. Coyne has led the strictly felling and hoe chucking operation as owner-operator for about five years. At 46, the lifetime Vancouver Island logger knows his way around steep ground.

“I’ve made a living out of steep slopes,” Coyne says. “Tethering was a natural progression for us.”

The harvesting sites for Hyde Creek are mostly north of Campbell River near the Village of Woss. Fibre here is predominantly hemlock but includes fir, cedar and cypress, and ranges from 450 to 1,100 M3 per hectare. The trees can grow up to six feet in diameter.

Standard practice for untethered machines on the coastal B.C. terrain is to harvest where fibre is accessible, then to leave the challenging inclines to hand fallers and cable yarding. For Coyne, that meant lost revenue in a tough market.

“I took a chance and got into tethering early thinking that not many people would, and I know there is enough work on the north island to keep us going,” Coyne says.

Learning curve
The Falcon winch is built for a one-man harvesting operation. The operator in the harvesting machine controls the winch remotely and can monitor the oil pressure and temperature. A mounted live-feed camera gives the operator a view of the engine bay and winch drum.

“The single 500 metres of 1 1/8-inch swaged cable has about 24-tonne holding capacity and is a lot less complicated than two-line systems,” says Scott Cairns, Vancouver Island branch manager for Great West Equipment. The single cable, he says, allows the Volvo/DC winch excavator to be more versatile, to build its own trails if need be. Operators are able to tether the levelling machines above the road by using hook blocks and stump movement sensors, and “live Dutchman type rigging” down into draws and gullies.

“The logistics of it are challenging at first – learning how to use it most efficiently,” Coyne says. “But the actual system is very simple. I could teach somebody who already knows how to run a machine to tether in four hours and they are comfortable.”

One of the biggest challenges, Coyne says, is what winch operators call sidewashing the lines. “Instead of running lines straight down the hill, you hook them around stumps,” he says. “If you want to drop off a ridge to the side you hook the lines on a stump and then use the stump to change the direction of the lines. How to do that properly, where to do it and when not to do it are big lessons to learn.”

The versatility of his harvesting program took some work to arrange, Coyne says, but it’s working well for his team. Hyde Creek’s fleet is complete with three log loaders: two John Deere 3754 swing machines and a John Deere 3554.

Safety focus
Winch systems became a popular conversation topic in Western Canada over the past year or so, and safety has been the main buzzword of that conversation. It was again in New Zealand that Coyne learned what methods are necessary to keep loggers safe.

“That was one of the main reason I went to New Zealand,” he says. “They have really great safety systems there and they were very open to sharing their safe work procedures. So I collected as much as I could from them.”

Armed with that knowledge, Coyne developed his own safety plan with the help of Zimmfor. “We have a pretty comprehensive safety plan, going over the winch machine daily, checking lines and rigging,” Coyne says. Weather, for example, can be a red flag that would prevent the loggers from using the winch machine.

Coyne’s focus on safe operating extends to all his employees, particularly since they are operating with relatively new harvesting techniques. That means the hiring process is slow.

“I’m a picky guy; I don’t want to start with a green person. I hired my youngest guy about a year ago. He had three years of experience already and I told him he was going to be re-trained. We have a way of doing things and a standard that’s quite high. He’s now a believer in the way we do things.”

Steady climb
Coyne says he does not expect the winch to dramatically change his production numbers for 2017. If anything, he says, the winch slows down daily operations. But the payout is in the price of the fibre on those slopes that were previously inaccessible for his harvesters.

“Business was slow last fall and the tethering opened some doors for us. We couldn’t have done some of that work without tethering,” Coyne says.

The frequency of the Falcon’s use depends on the job, but last fall Hyde Creek was harvesting a block near Jeune Landing that required daily tethering.

As well, he says, the Volvo/Falcon is a low-maintenance machine, which makes it a lasting investment. “It’s different than other machines because it’s got a very easy life. It’s just winching – all day it’s sitting there half throttle so it’s not going to wear out anytime soon.”

Looking forward, Coyne says he’s comfortable his logging business is able to accept the jobs that come his way. As the demands on loggers get steeper, Hyde Creek is prepared to reach new heights.