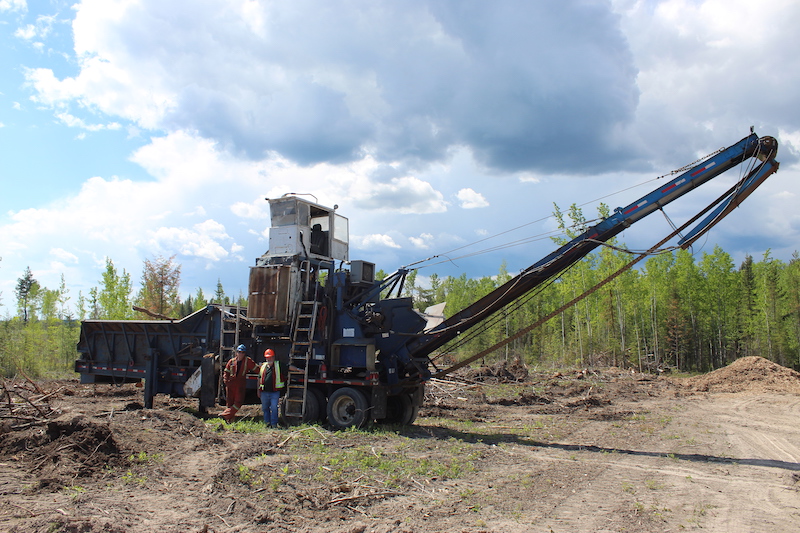 Claude Paquet has seen it all. A veteran of the forestry industry, Paquet has been logging since 1971, when he got his start by selling his car for a skidder and hitchhiking to logging sites.

Paquet quickly built up his own business, which began as CJ Paquet Logging. Later, he changed the name to Clan Logging in honour of his family.

“C for Claude, L for Lisa, my daughter, A for Armand, my son, and N for my wife Nancy,” he explains.

Having been in the industry for so long, Paquet knows how to weather its ups and downs. As wildfires, pests and a struggling market have forced the B.C. forest industry into a downturn, Paquet has diversified his operations, and recently identified a new opportunity: grinding wood waste.

Logging operations
When it comes to his logging operations, Paquet tries to save every piece of wood he can. Clan Logging mostly does cut-to-length logging for West Fraser’s Quesnel sawmill and Quesnel-based C&C Wood Products, cutting whatever lengths they require. If the logs meet the required quality for plywood, they also go to the West Fraser plywood plant.

Most of the company’s harvesting profile is spruce and pine, but they also log some aspen, poplar, and birch, which becomes chips for West Fraser’s Quesnel River pulp mill to burn as energy.

“I’ve got it all,” he says. “I’m not attached to one piece of equipment. In the past I bought a lot of Caterpillar, three or four at a time. But now I buy to meet the demand.”

Out in the forests, Paquet keeps the average skidding distance under 150 metres. “If we go more than 150 metres, we lose performance and partition, so costs go up,” he explains.

Currently, a dozen employees work for Paquet doing logging and grinding. During peak winter season, that number jumps to 25 or 30. Throughout most of the year, employees only work the day shift, but in the winter, they also work the night shift to help keep the machines warm.

“The machines don’t break down as much because they’re running around the clock,” Paquet explains. “But that’s the only time that I work a double shift.”

Despite the variety of species Clan Logging harvests, production levels have dropped in recent years, thanks to B.C.’s limited fibre supply.

Paquet has several machines for his road building operations, including a Case Machinery road grader, a John Deere 722B road grader, an Ingersoll Rand packer and a Volvo excavator. He also does some land clearing, cutting and hauling timber for private property owners.

But Clan Logging’s log hauling fleet is currently limited to one logging truck, a 2012 Kenworth.

“It depends on if we get a timber sale or if West Fraser gives me a block to cut,” he explains. “We hire more trucks to get it done sooner and then move to another block.”

Paquet measures his average hauling distance not by kilometres, but by hours. It ranges between 12 hours in one trip to 14 hours in two trips, he says. He estimates the furthest his trucks go is 50 kilometres past Bear Lake, B.C.

“The distance depends on the road conditions. That’s why we go by the hour,” he explains.

“Haul distance is all dependent on the speed in the town,” he continues. “It’s never the same hour because you’ve got to be safe. We follow the rules on what the speed limit should be when you load a truck with 50,000 to 60,000 kilograms.” 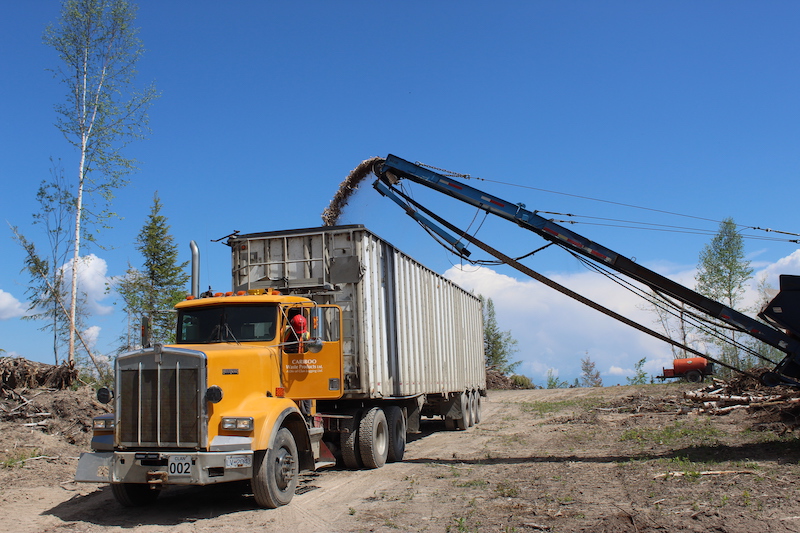 A new opportunity
Paquet has not stopped there – four years ago, he began grinding wood waste using a Peterson 4400, and now he’s looking to expand.

Paquet says the Peterson 4400 suits his needs because it has smaller tires, which allows him to move in small areas and do both big and small jobs.

“They’re probably the top in the market right now,” he says about Peterson grinders. “What it comes down to is the service. Peterson provides good service.”

Paquet believes the market for grinding wood waste is more viable now because of the wildfire threat and growing nature of the biomass market. He’s currently producing 100 to 200,000 dry units of biomass per day, most of which goes to the West Fraser pulp mill to be used as energy. He also supplies chips for Pacific BioEnergy’s wood pellet plant in Prince George.

“That’s a lot of waste, and customers are putting pressure on me because people want grinding done. But everybody wants it at the same time because we’ve got a lot of pressure from the wildfire threat,” he says.

“My job can be pretty tough due to planning, because some areas you cannot do it in the summer, you can only do it in the winter. So, trying to please everybody sometimes is tough,” he continues. “The demand wasn’t there before, but the demand is growing.”

Paquet sees grinding wood waste not only as a viable market, but also as an environmentally sound decision. “I believe in zero waste to save the environment,” he says.

Consequently, he’s planning to build up his grinding business to 200 to 300,000 dry units per day or more, and is looking to buy a new tracked grinder to help handle the additional volume.

At the moment, Paquet has a few trucks for his grinding operations, but he also plans to buy a chip truck and trailer to keep up as he expands.

“I can reduce the logging a bit and build up this side of the business. I’ve got some contracts coming up,” he says. “I’m looking at a 10-year license for grinding for waste and three to five years for grinding for Pacific BioEnergy.”

Tough times ahead
However, Paquet admits that the B.C. forest industry is facing very challenging times.

In B.C., the cost of fuel and wages is particularly high, as CFI reported in the 2018 CFI Contractor Survey, which can be found at www.tinyurl.com/y2sckdoz.

“It’s very tough to survive right now between the wages and the fuel,” Paquet says. “When it comes to wages, you have to compete with the town and oil companies.”

The ongoing industry-wide labour shortage and difficulty attracting young employees is also an issue. Demand for young forestry operators in B.C. is particularly high in the Quesnel and Prince George area.

Consequently, Paquet hires operators from other provinces, as far as New Brunswick, and brings them out to B.C. to work during peak logging season. Those employees don’t necessarily return, but Paquet says he has been fortunate to find some workers who are extremely loyal to him.

“I’ve got one guy, he’s worked 32 years for me, and he comes not far from where I was raised in Quebec,” he shares. “I’ve got some very good employees. But if you hire a new, young guy, you have a hard time making him work hard the way the older generation was brought up to work hard.”

Another challenge affecting all Canadian loggers is pests, which can either balloon or shrink fibre supply in B.C. depending on whether or not the beetle kill wood can be harvested.

“With the pine beetle, they thought it might only last six or eight years, but we got 12 years from it. We’re still logging some,” Paquet says. “Now we’ve got the fir beetle – it’s very, very bad and the wood doesn’t last any longer than the pine. And then we’ve got the spruce beetle, which is a big problem. It’s a type of beetle that, when it kills the trees, two years later, the timber is no good anymore, it rots and cracks.

“It reduces grade one wood to grade three. How can you sell on the market to survive with grade three lumber, considering the cost of fuel today?”

Paquet therefore believes there are very tough times ahead for the industry.

“In Quesnel, the fibre supply struggle is very real, and we have to figure out how we’re going to use the remaining fibre and share it. There aren’t going to be many mills left out here. When I was logging years ago, we had Tolko, Canfor, West Fraser, Weldwood. Now we only have West Fraser and C&C,” he says.

“West Fraser used to be two or three shifts. Now they’re down to one shift and they’re not going to add any other ones,” he adds.

“We’re having trouble with wildfires because we didn’t take care of the woods. Everybody had reserves of wood they didn’t want to log. But trees don’t live forever,” he says. “The bugs came and attacked the trees, but we can’t get rid of the bugs because we have so much volume. We need to take care of that so it will regrow.”

Despite these issues, Paquet says he’s “looking to work hard in the next 10 years and make it work.”