Nov. 28, 2017 - For a group of 20 or so loggers who make up JHL Forestry in northeastern Alberta, the job has several unique challenges, not the least of which is their diet: 90 per cent aspen. 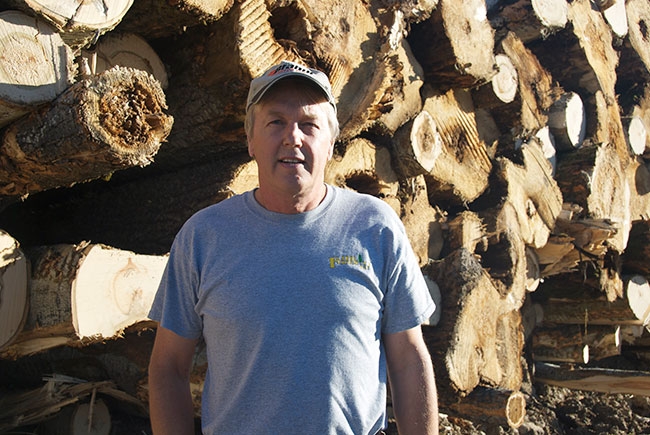 JHL is one of several contractors exclusive to Alberta-Pacific Forest Industries (Al-Pac), a large pulp mill located near Boyle, Alta., about 150 kilometres northeast of Edmonton. The mill produces 640,000 metric tons of pulp a year, about 85 per cent of which is hardwood from aspen and poplar in its forest management area (FMA).

At the time of Canadian Forest Industries visit, JHL Forestry was logging in the far eastern section of the FMA, almost at the Saskatchewan border. Muskegs and bogs checker the thick boreal forests of trembling aspen, balsam poplar, white spruce and jack pine.

David Lloyd is the general manager for JHL Forestry. “Al-Pac is very concerned about what the final product will be out there. When we’re logging we’re doing everything specifically to mitigate the impact on the harvest areas,” he says.

When loggers are harvesting in understory spruce, strip logging is used to minimize impacts on the remaining spruce after the hardwood overstory is harvested. Feller bunchers clear a six-metre swath then reach three metres on either side of the swath to selectively harvest. Another three metres are left untouched between each strip. Once the loggers move out, another contractor takes care of road reclamation.

“The idea after we’re done is that the whole area is re-vegetated and it returns back to its natural state as best as possible,” Lloyd says.

These challenges mean JHL Forestry has to work delicately with difficult wood. As a result, the company’s operating model is about quality, not quantity, Lloyd says.

Roots
Lloyd can trace his family’s logging heritage back five generations to the early 1800s after his family moved to Canada from Scotland. The Lloyds set up shop near Montreal where they operated a small sawmill before migrating to Ontario and eventually settling in northern Ontario.

“At a young age my father was managing a local lumber company in the Sudbury, Ont., area and he started me off in 1975 in some magnificent red pine forests and I thought, ‘This is a piece of cake. I get paid for walking through the bush, measuring trees.’ There was a local logging operation there and I decided to pursue that the next summer,” he says.

Lloyd then went to the University of New Brunswick for forestry. Over his career he worked for EB Eddy and Domtar in northern Ontario. In 1994 the logger moved to Alberta for Al-Pac. In 2003 the JHL manager’s position was offered based on a two-year secondment to help launch the company. Fifteen years later and Lloyd is a permanent fixture in the day-to-day operations of the outfit.

John Ellison, assistant woodlands manager for Al-Pac, still sits on JHL’s board of directors to help with general business.

“Al-Pac has always targeted more volume towards JHL because of the relationship we have with the owners. They’ve become a preferred contractor,” Ellison says. “It’s an ongoing discussion about how much more volume is in play and how much Dave can manage versus what Al-Pac can provide.”

Logging the FMA
Al-Pac’s FMA covers about 6.37 million hectares stretching from an area north of the mill to north of Fort McMurray, and east to the Alberta-Saskatchewan border.

“We have a contract with specific volumes and Al-Pac has been very generous trying to accommodate this extra capacity,” Lloyd says.

JHL Forestry is a stump to roadside outfit; other contractors for Al-Pac take care of log loading and haul to the mill. On average the loggers are working with 2.7 to 3.2 trees per cubic metre. All logs are cut to 37 feet to maximize each trailer load sent to the mill.

About two thirds of JHL’s operation happens in the winter when the muskegs are frozen over. Those cut areas would otherwise be inaccessible.

“They are ice roads essentially. Equipment is going across frozen muskegs and swamps. In March when the sun starts to come out longer you watch everyday as the roads degrade. You want to get the logging phases closer together so you can decide within a day if you need to get out of there,” Lloyd says.

David Lloyd is the general manager for JHL Forestry

one of several contractors exclusive to Alberta-Pacific Forest Industries in northeastern Alberta. JHL harvests about 90 per cent aspen to feed the large pulp mill.

Iron
JHL Forestry was the first contractor for Al-Pac to switch from delimbers to feed roll processors. “We wanted a machine that would speed up production, but be tough enough to handle aspen with all its rugged branches and knots,” Lloyd says.

“The big concern before we bought them is whether or not the machines could produce a product that Al-Pac was looking for [in 37-feet lengths],” Lloyd says. Originally they were concerned the product would be too messy and difficult for the loaders and log trucks to handle.

After some research, Lloyd purchased two Waratah 624C processing heads, as well as the first North American 623C. He then flew in some loggers from New Brunswick to help the local team adjust to the processing style. Some of those loggers stayed to work for JHL. “My local operators are just as capable  as those guys now,” Lloyd says.

Watching the processors at work it’s clear the aspen challenges them, but with practiced ease the operators plug their way through the decks slowly and steadily.

The JHL fleet includes 13 pieces of equipment – a mix of John Deere and Caterpillar. For feller bunchers they are running all John Deere, including a new 903M, an older 903J, and a 953K.

The skidders are all John Deere 748 models: one GIII, two H and a brand-new L. With its Tier 4 engine and diesel exhaust fluid (DEF), the new 748L runs much quieter than previous models, Lloyd says. “I did tons of research. I’ve been watching it for three or four years . . . We took a chance and it’s panned out alright,” Lloyd says.

Fire salvage
Lloyd is no stranger to salvaging wood from wildfires. He was working for Al-Pac during the 2002 fire that burned 240,000  hectares on both sides of Highway 63 – the road that connects Edmonton and Fort McMurray.

While many loggers harvest partially charred wood for sawmills, Al-Pac requires its pulpwood to be 100 per cent char free. If char is found in the pulp the resulting bleach kraft is of a lower quality.

“Sawmills producing lumber can accept burned conifer because they are cutting it up to produce pure boards,” Ellison says. “We harvest char free in low-intensity burns. So we’re very selective in our planning and where we would send in our loggers to harvest and salvage.”

JHL has several strategies to harvest semi-burned wood up to Al-Pac’s standards. If the fire affected only the forest floor, they are able to cut above the charred area to pull out a clean product. The final filter is the processors who are able to more easily see the burn scars as they run the wood through their machines.

“It’s a matter of communicating to the crew and then frequently reinforcing to the crew what the standards and the acceptable levels of log quality are for Al-Pac,” Lloyd says. It’s a difficult and slow process, but again, JHL’s MO is quality over quantity.

People driven
More than anything else, Lloyd says it’s his employees that motivate him to continue growing JHL Forestry. He wants to make sure his people have long-term work and a steady paycheque.

“We run a community based show and the No. 1 thing is to look after employees. I feel if you take care of employees and provide them a good working opportunity in the bush, they will look after the rest for you. That’s what’s happened. I’ve got this strong nucleus of experienced workers and I can look after the big picture stuff and they will take care of the details,” Lloyd says.

The crew works back-to-back 12-hour shifts. “They’re driven. If I let them, they’d work much longer than that. I’m always watching for the burnout factor,” Lloyd says.

Part of what makes the crew successful is a mix of experiences, Lloyd says. Within his 20 or so person crew there are members of four different First Nations from small communities in northeastern Alberta. Another handful of the crew members are experienced loggers from New Brunswick.

“I think you’ll see that when people are from all over the country you can pull on different experiences and the mix works really well,” Lloyd says.

When compared to their boom-and-bust neighbours in the oilsands, the future for JHL Forestry looks bright, Lloyd says. “We’re still here. We’ve worked through the huge ramp up in the oil industry and we didn’t change. It’s steady and it’s been good for us,” he says.