June 1, 2017 - John Deere is launching a longed-for global first at Elmia Wood. The company has now developed its crane-tip control for harvesters too. There will also be the opportunity to test operate several forest machines plus do tests on simulators at the John Deere stand.

“Visitors can try out the new technology during the fair,” says Dieter Reinisch of John Deere.

Crane-tip control for forest machines is a true Elmia Wood innovation, which has been developed over the past three fairs. John Deere presented the concept with the help of a forwarder simulator in 2009, which contractors could test and comment on. At Elmia Wood 2013 it was time for the world premiere of forwarders with crane-tip control, which has become a much-appreciated function.

“Our customers say they move an extra load every shift thanks to crane-tip control,” Reinisch says.

And now it’s time for what the industry has been talking about for ten years: crane-tip control for harvesters. This world first is being presented at Elmia Wood, installed in a John Deere 1270 harvester. Visitors to the fair can test the function both in reality and on simulators.

John Deere is also presenting an updated version of its crane-tip control for harvesters. The innovations are in the software, which means that contractors who already have the function on their forwarders can obtain the innovations at their next service opportunity.

All of John Deere’s machine models will be exhibited at the fair, including the three new mid-size forwarders in the G series: the 1110G, 1210G and 1510G. Also being shown is the first harvester in the G series, the 1170G with eight wheels. It is a smaller-size machine with a broad range of uses from thinning to easier final felling.

One recurring request at previous fairs has been for the opportunity to test operate the machines. This wish will now be granted. John Deere is offering the chance to test operate its forwarders with a rotating and levelling cab. This function is almost standard in the Nordic markets but elsewhere contractors often choose a fixed cab for cost reasons.

“At Elmia Wood they have the chance to experience the added value of a rotating and levelling cab,” Reinisch says.

Elmia Wood is the world’s leading forestry fair and is held every four years outdoors in the forest south of Jönköping, Sweden. The last Elmia Wood (2013) had over 500 exhibitors and 50,000 visitors from around the world and was monitored by the international trade press. On 7–10 June 2017 the global forest industry will gather once more. 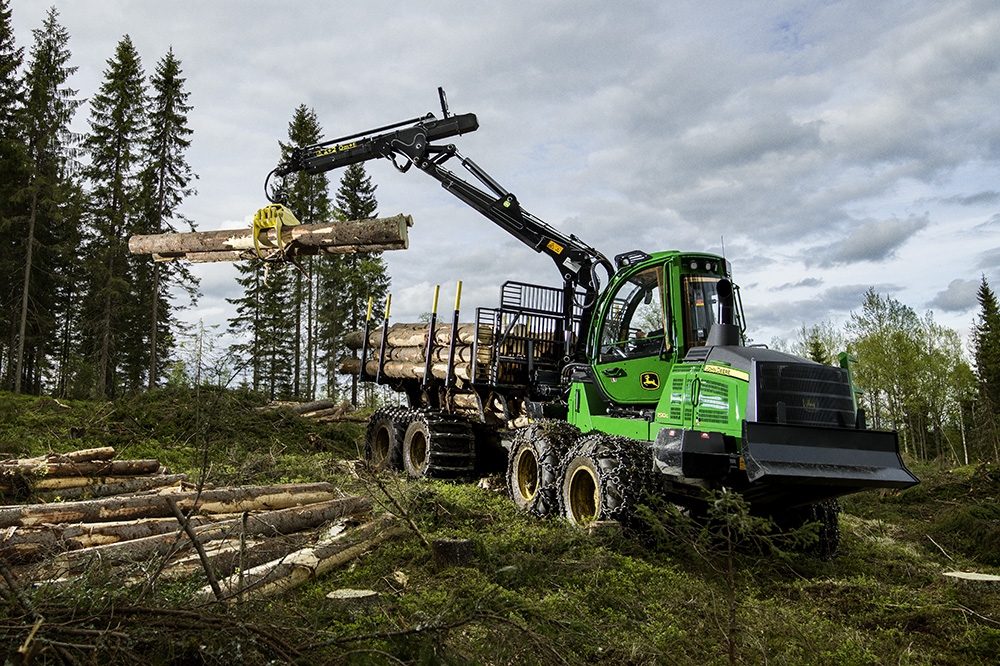 The entire G series of mid-size forwarders from John Deere is being exhibited at Elmia Wood. Photo:John Deere
Print this page