Yes, the industry’s in a rough patch. Cyclical issues like a collapsed housing market, a sputtering economy, and the resulting drop in advertising in the US are conspiring to batter lumber, panel, and newsprint demand and pricing. Energy costs don’t help. Structural issues are also being addressed, from the general decline in North American demand for paper products to a fragmented Canadian pulp and paper industry with too much and often too costly capacity. Few realize this dovetailing dilemma more than Avrim Lazar, president and CEO of the Forest
Products Association of Canada (FPAC). He spoke with CFI Magazine from his Ottawa office just ahead of Paper Week, the annual pulp & paper sector gathering held in Montreal in early February. 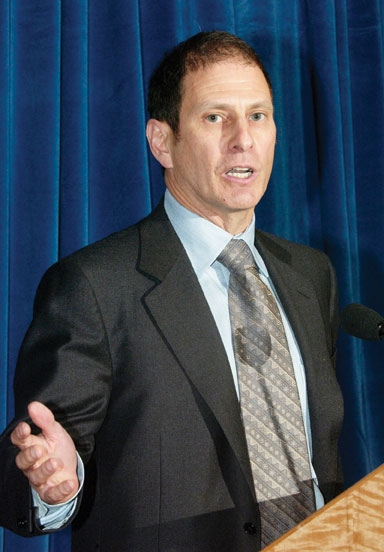 “A restructuring should have started a while ago, but with provincial restrictions (on forest tenure) and federal opposition to mergers, it has been delayed. The lower Canadian dollar also allowed the industry to remain fragmented, and yet still compete. But the recent rapid rise in the Canadian dollar has forced some major restructuring to happen very quickly.”

This we’re all aware of. It means closed mills, uncertainty, reduced volumes for the lucky logging contractors left running, and tough times for everyone, from mill staff to loggers and machinery suppliers. Still, get past the slumping US economy and the structural changes, and Lazar feels the industry’s near term future is very promising. He cites several factors, both domestic and global, to support his optimism.

• Consolidation: The mergers and restructuring that should have happened a while back are now moving forward. They are hard on many communities, Lazar admits, but the focus on mill closures and layoffs masks some good news happening behind the headlines. For starters, there are the efficiency gains that will serve the industry well moving forward. It’s not all about getting bigger Lazar insists – just better. “As some of these fragmented operations come together, there are all the synergies you hear about – the collective knowledge, experience, market access, distribution. It also allows mills to concentrate production and investment in facilities that can do so more profitably (ed note – such as two mills running at 98% capacity rather than three at 75%). It also gives the scale to allow companies to experiment with new products or technology without risking their entire production flow.”

• Adapt to survive: What doesn’t kill you is supposed to make you stronger, so that years of adversity is resulting in enhanced efficiency for the survivors. That will come as no surprise to those familiar with BC Interior sawmills and their collective response to challenges that have included US protectionism, rough markets, and now the beetle. Lazar says studies by the likes of Finnish consulting firm Pöyry show that the number of Canadian newsprint mills in the global top quartile for costs has tripled in recent years. A far cry from the popular image of crumbling mills built early last century, but good news for us.

• Navel Gazing: People tend to focus on their own problems, but Lazar reminds us that the rest of the world has its own problems, from European bioenergy subsidies that make wood more profitable to burn than pulp, to Russian uncertainty and bureaucracy and South American land use struggles.

“We tend to forget our competitors have their own problems. But the bottom line is that the global demand for forest products grows at 3% per year, which means adding the production capacity of the Quebec industry every year. At the same time, that growing market is being supplied by a world with ever-increasing competition for a shrinking land base. Whether it’s pressure to use land in Brazil for biofuels or in Asia for food, it will all encroach on those areas’ ability to grow fibre to feed growing forest products markets. I can’t see the future, but to me this positions Canada very well in the mid-term as a supplier of quality forest products.”

That still leaves another tough year or two, depending on events south of the border. It also means industry will have to manage a tricky transition over the next few years. Still, it won’t be the first time the industry has faced tough markets or major shifts. Add a taxation structure that helps the industry re-invent itself through investment and innovation, and there are reasons to be optimistic yet.

Green you can’t buy
More good news is FPAC’s recently released carbon-neutral stance. Recent polls uncover a public very sceptical regarding corporate claims about reducing greenhouse gas (GHG) emissions or creating carbon neutral operations. With good reason, when you consider that you can wash away your consumer guilt by paying your airline to plant a tree when you fly, and that companies can do the same by buying their own carbon credits. For this reason, FPAC included two critical elements when it launched its carbon neutrality promise this past fall – It included very credible partners and advisors; and it set goals that did not at all rely on buying its way out of carbon debt.

• Trustworthy Partners: In pledging to become a 100% carbon neutral industry by 2015, FPAC has partnered with none other than the World Wildlife Fund (WWF), an agreement that, along with adding other partners and advisors, means both instant credibility and a long-term commitment to doing it right.

“I am not at all surprised to see polls showing that the public gives little value to corporate pledges of carbon neutrality,” Lazar admits when asked about industry credibility challenges. “I’d be shocked otherwise when you see some of the claims, or some of the industries making the claims. But look, this is not a PR move on our part. Frankly, we don’t need it. Our industry has
already met its Kyoto obligations seven times over – who else has done anything like that? It’d be simple just to place full-page newspaper ads saying “We’ve done Kyoto seven times over – What about you?”, but this is more about actually improving that environmental performance, not marketing it. And for that, we need partners with expertise. Of course, the added credibility is a bonus.”

• Earning credit, not buying it: Lazar adds that a big part of the credibility gap is that many corporations are not actually doing what the public actually wants – changing their carbon footprint in a meaningful way. It’s simply business as usual, with purchased carbon credits used to promote a green front. In contrast, the Canadian forest industry pledge specifically rules out purchasing any such credits. It helps that the industry uses a renewable resource and often makes products with a favourable carbon performance compared to alternatives (i.e. lumber versus either steel or concrete). It also helps that the industry already relies on renewable bioenergy for a big part of its energy mix. But the real difference, Lazar says, is going the extra mile to become truly carbon neutral right through the entire product life cycle, from the seedling growing in the woods to diverting lumber or paper from landfill.

“We’re working toward a fundamental shift in our energy usage paradigm, from fossil to renewable, and that’s exactly what the public wants. Our industry is now at 60% renewable, and we are going to be 100%. We’re also looking right down the value chain, at where the products go once we’ve sold them. We’re approaching our customers, whether in paper or building materials, and asking them to be part of the carbon neutral cycle.”

That could involve builders diverting waste wood materials to biofuel or bio-energy plants, banks recycling more paper, or at least landfills doing more to cap methane emissions. Back at the mill, it could mean  a new combined heating and power (CHP) plant to not only eliminate fossil fuel use at the mill, but to put power back on the grid or heat into the local community to displace what would otherwise be fossil fuel generated energy.  Combined, it means a lot of players and a lot of pieces coming together in seven short years. And that makes it an ambitious project you don’t see a whole lot of other industries emulating any time soon.

Gauging the carbon footprint of the forest products industry is very complex, but if you’d like to get a better handle on it, here are two places to start. The Canadian Forest Service has an excellent primer website to hit first (www.carbon.cfs.nrcan.gc.ca). After that, there is an excellent report on where the Canadian forest industry stands today, and where it can improve tomorrow, published just last fall by the National Council for Air & Stream Improvement (NCASI), called The Greenhouse Gas and Carbon Profile of the Canadian Forest Products Industry (www.ncasi.org/ publications/detail.aspx?id=3013). A detailed evaluation, it covers everything from the forest’s role as carbon sink or source, to product lifecycle, transport, harvesting and natural disturbances and more.