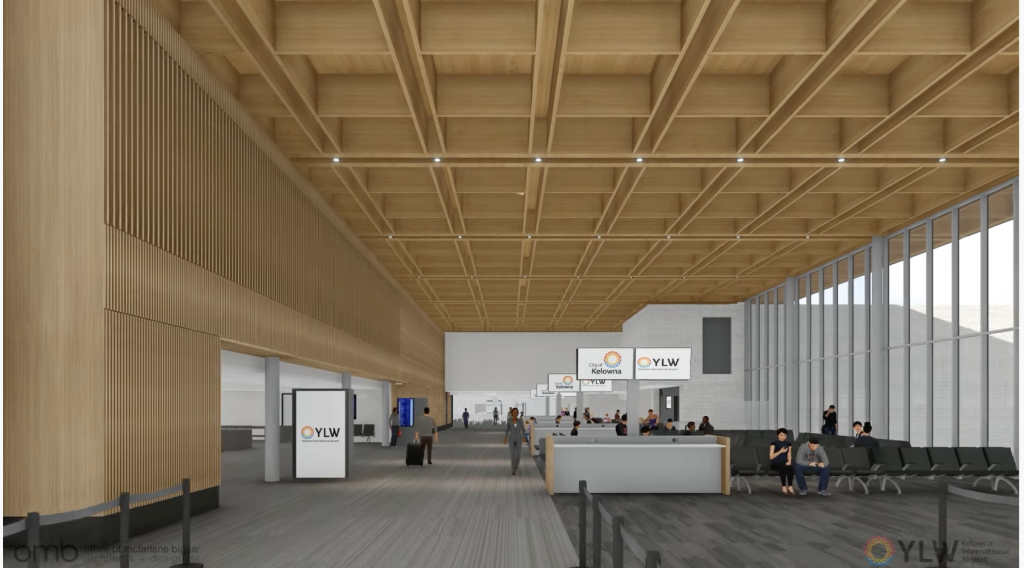 Kelowna International Airport (YLW) will benefit from an expansion and upgrade using mass timber through B.C.’s Mass Timber Demonstration Program, which has supported the advancement of mass timber in several projects throughout B.C.

“We would like to thank the province for investing in YLW and in the use of mass timber for our terminal building expansion,” said Sam Samaddar, YLW airport director. “With the increases in both aircraft movement and passenger traffic, this terminal expansion enables YLW to continue offering the highest level of service.”

“This project showcases what is possible when we promote innovation in the construction sector and support the development of mass timber in large infrastructure projects in B.C.,” said Ravi Kahlon, Minister of Jobs, Economic Recovery and Innovation.

The airport will receive $500,000 from the province to help with costs associated with the use of mass timber, as well as the creation of a digital construction twin, advanced fire modelling and life-cycle assessment of building materials. The use of prefabricated mass-timber panels will reduce construction time and will result in less construction traffic to the site.

“Growing B.C.’s mass timber sector is key part of our government’s vision for the future of forestry – a future where we get more value from every tree harvested. It’s great to see that mass timber will be a key feature in Kelowna International Airport’s expansion project and shows B.C. continues to lead the way on mass timber,” said Katrine Conroy, Minister of Forests.

Canada’s 10th largest airport will remain open and fully operational throughout the nearly 8,000-square-metre expansion. In spring 2022, YLW will began enabling works for the airport terminal building expansion. Construction is anticipated to begin in 2023, with phase 1 complete in 2026.

“I’m thrilled to see that the terminal expansion will use mass timber, showcasing the versatility and design capabilities of BC lumber, while also contributing to the local economy,” said Kelowna mayor Colin Basran. “As YLW is the gateway to the Okanagan, the choice to use mass timber is an important decision to highlight the characteristics reflective of the region.”

Building off the project at YLW and the success of the first two intakes of the Mass Timber Demonstration Program, B.C. is also announcing an additional $2 million to open a third intake, which begins immediately.

“We’re excited to continue onward with the Mass Timber Demonstration Program,” said George Chow, Minister of State for Trade and chair of the Mass Timber Advisory Council. “This new intake will further advance B.C.’s mass timber sector by continuing to grow B.C.’s position as a world leader in the field, while also building the knowledge and talent to keep driving the sector forward here at home.”

Individual projects can receive as much as $500,000 for incremental or one-time costs associated with design development, permitting and construction activities in mass-timber building construction.

Watch a 3D architectural rendering of the airport terminal building.