Jan. 31, 2017 - Klondike Lubricants Corporation announced Monday the expansion of their distribution network to Atlantic Canada. The company has been growing from its West Coast origins, manufacturing and distributing OEM certified packaged and bulk oils, industrial lubricants and chemicals throughout the Canadian market. Warehousing and distribution centres have increased significantly in the home-base of Vancouver, and have grown over the years to include facilities in Edmonton, Alta., Winnipeg, Man., Toronto, Ont., and now Moncton, N.B., as part of a planned North American expansion.

In January 2017, the company added a new distribution facility in Moncton, N.B., to meet the increasing demand for KLONDIKE lubricating oils and greases. The warehousing centre will enable faster delivery to dealers and customers in the Atlantic Provinces – New Brunswick, Prince Edward Island, Nova Scotia, and the easternmost province of Newfoundland and Labrador. At the same time, the company met with prospective dealers in Moncton, to kick off expansion in Atlantic Canada.

The Klondike product range includes a wide range of formulations for most applications in any climate and condition. The product categories are heavy duty and automotive engine oils, gear lubricants, transmission fluids, hydraulic fluids, industrial and functional oils, greases, and chemicals. With over 270 oils, lubricants and chemicals, Klondike is used in the agricultural, automotive, marine, mining and drilling, forestry, construction, road-building, and on-road and off-road transport industries.

“Klondike started in 1987, as a chemical and lubricants supplier to the OEM Dealer Networks and professional service and repair facilities throughout Canada,” said Brad Mitchell, vice-president of sales & marketing at Klondike Lubricants. “We are known by a demanding customer base for our dedication to quality and outstanding service to a broad range of industries. This has led to a rapid level of growth that we are pleased to now bring to Atlantic Canada.”

Vice-president of finance & operations for Klondike, Phil Jenner added, “For the significant number of new dealers coming on board in the Maritimes, the latest distribution facility in New Brunswick will allow for a fast and cost-effective way to deliver the Klondike heavy duty, industrial and automotive oils and lubricants. We were extremely impressed with prospective distributors we met in Moncton.” 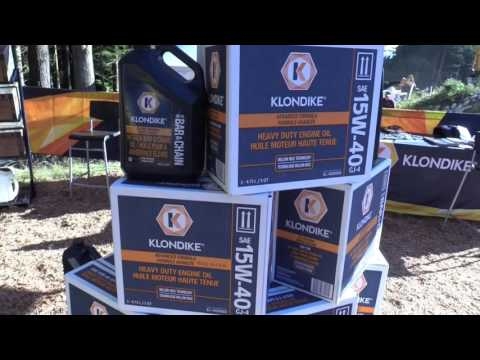