Features Q & A Women in Forestry
Know your worth: Q&A with Hearst Forest Management’s Desneiges Larose 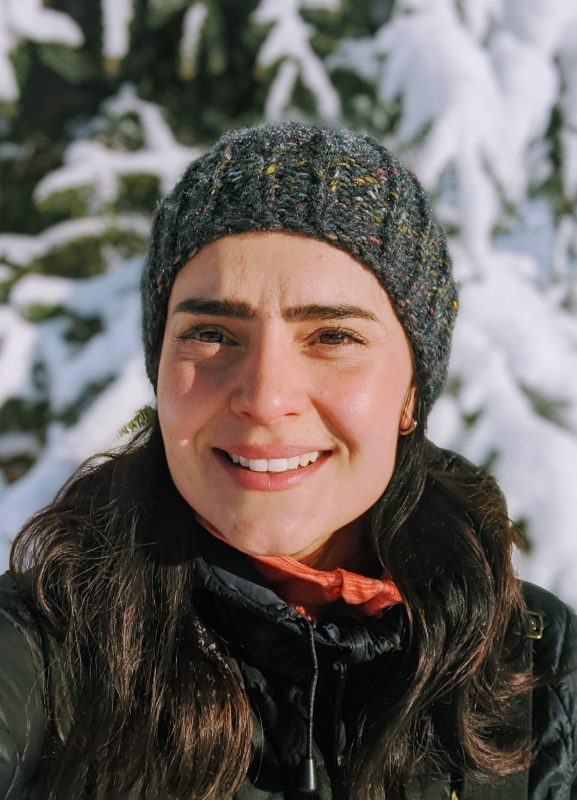 From an early age, Desneiges Larose was drawn to the forest. She studied forestry in university, working in parks during that time. However, after obtaining a Master’s of Science in Computational Finance, she worked as a consultant. She got the chance to return to the forest when she became the general manager of Hearst Forest Management Inc. in Hearst, Ont. Starting out as a young woman in the industry, Desneiges was often the only woman in the room, and had to build up her self-confidence. Her advice to young women looking to get into the industry? Know your worth.

It wasn’t exactly a traditional path. I studied forestry and was drawn to the forest from an early age. Most of my childhood memories are about being in the bush with my family. But, I didn’t get an entry level job in the sector. I developed my skillset and management experience working as a consultant in research and in economic development, later developing my management experience in the post-secondary education sector with Collège Boréal. A few years ago, I was fortunate to have an opportunity to interview for the position and be awarded the role as general manager at Hearst Forest Management Inc.

CFI: What is it about forestry that you enjoy?

Oh gosh, where do you start? I grew up in northern Ontario in a forestry-based town, so I grew up curious about the forest ecosystem and how we interact with it, with each other, and how we manage those interactions.

I suppose like everyone who studies forestry or gravitates towards it, I am curious about both the ecological and social relationships as it relates to forests.

CFI: What’s involved in your role now as general manager?

It’s a leadership role that requires a participative and collaborative approach. My main responsibility is managing the sustainable forest license (SFL) for our shareholder company. I look after the general management of the company and oversee the planning and implementation of the compliance, silviculture and road maintenance and construction programs in collaboration with a team of forestry professionals, licensees and stakeholders. There is a lot of variety in the work, but the main role is fulfilling our mandate of sustainable forest management of the land base and ensuring that we do so efficiently, effectively and sustainably.

CFI: Were there particular people who encouraged, supported or mentored you in your transition into forestry?

Of course, there were many people, though perhaps not in the traditional sense of mentorship. I think most of my mentorship was more informal; I don’t think I ever had a sit-down discussion with a person and asked to be mentored – though I would have benefited from doing so. I am fortunate to have been surrounded by community members, academics and professionals within forestry and outside of it, from whom I have learned a great deal. Every meeting, every conversation and walk through the forest or harvest block is an opportunity to learn in terms of applying to this position. I had a lot of self-doubt, and, certainly, there were people that encouraged me and told me, “You’re crazy if you don’t send in your resume.”

CFI: When you first started out in the industry, were you apprehensive about being a woman in a predominantly male industry?

It certainly took me a while to find my footing. It’s interesting how much of your experience is shaped by perhaps your own lack of confidence or your own perception of things. I was very self-aware of the fact that I was often the only woman in the room. I think that did sometimes put me off-kilter even though my male colleagues were welcoming and supportive.

But, I don’t know if it had as much to do with being a woman as being one of the youngest people in the room. When I started, I was just entering my 30’s, and most of my colleagues that I have the pleasure of working with have been around for a very long time and they’re well-established in their career, they’re very knowledgeable and experienced. So, I think there is an aspect of it that wasn’t just related to gender, it also had to do with being one of the youngest people in the room and making sure I was navigating expectations and perceptions, not just of others but of myself.

I think one of the things that I’ve learned, now that I can’t claim to be the rookie general manager and that at first thought was seen as a weakness, is the value of asking “why.” Don’t take for granted why things are done a certain way. I think that’s probably one of the advantages that you have when you get into a setting where you’re kind of an outsider. I feel it makes it easier to ask questions about why things are being done a certain way. At times, that can add value to operational planning and support identifying efficiencies and promoting collaboration. If you ask why something is being done a certain way, it supports your colleagues and peers in engaging in those discussions and creates more room to re-evaluate.

CFI: Since becoming the general manager at Hearst, have you seen any changes in the industry in how companies approach diversity and inclusion?

I believe so. There’s a whole movement and a shift to include more women and have more diversity, trying to make sure there are no barriers to getting into the forestry sector. I mean, we can’t afford it. Everyone’s been talking about the time when a lot of people will be coming to the age of retirement, and there’s a lot of worry associated to it. So, I think, we have to become more diverse and inclusive in order to continue to have access to the talent that we need. We have to be pushing that message that we’re open for business and we want everyone to be able to see themselves in a career in forestry.

I think a lot of people have a desire to get into forestry who may not have seen themselves in it in the past, because there hadn’t been a lot of discussions around inclusivity in the past. If you go to any campus at forestry schools, they’re becoming far more diverse and representative of the population. But, I think a challenge for the forestry sector is going to have to do with location. The representation in small, rural northern communities in Canada looks a lot different than a city centre like Toronto. So, I think that also has to be factored in.

I would say try not to be self-conscious. I think most of my male colleagues that may be in the same situation or in the same place in their careers as me seem to exhibit more confidence than I think I ever had. I think knowing your worth is a big part of it. In my case, people saw my worth more than I did. I wish I could have had more confidence in myself, and that’s what I would tell any young woman who wants to be in the sector, that you’re probably more insecure about you being there and you’re projecting it more than it is there.

For younger women that have an interest in applying to leadership roles or working up to leadership roles, I would say, you have to learn to navigate your own insecurities. If you’re not exhibiting enough confidence, it’s going to be very hard to convince others that you can manage their budgets, their company, their licenses and that you’re a person that can be trusted with the role of arbitrator.

This post is part of CFI, Pulp & Paper Canada and Canadian Biomass’ Women in Forestry series celebrating International Women’s Day on March 8. Find more content here and follow us on social media with the hashtags: #WomeninForestry, #IWD2021 and #ChooseToChallenge.

Remember to join us for the Women in Forestry Virtual Summit on Mar. 9 at 11 am ET/8 am PT! It’s FREE to register. Sign up now!