The current F-150 is going into the last year of its life cycle – this being the eighth incarnation now - and yet will receive a host of upgrades rather than coasting till the ‘09s arrive. That’s an unusual move for a car company, but then what I have seen here at Ford’s headquarters in Dearborn, MI during a press meeting makes it clear that this is not business as usual. 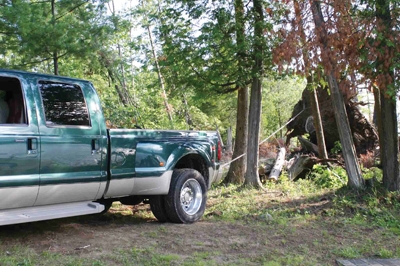 Our test truck turned out to be quite a stump puller The current F-150 is going into the last year of its life cycle – this being the eighth incarnation now - and yet will receive a host of upgrades rather than coasting till the ‘09s arrive.

Unless you’ve been off the planet the past two years, you’ll know of Ford’s financial woes – and that is exactly what is influencing the F-150 re-vamp. Ford is in a big rush to win back business and they are not waiting with anything; including upgrading the outgoing F-series, which for ’08 will go to market with Ford offering several new cargo management options, including something called a Mid-box.

This factory installed option provides lockable storage for tools and gear accessed through two swing doors right behind the cab of the truck. That’s one innovation; another is a new rear-view camera, whose screen hides behind a reflective surface in the rear-view mirror that disappears when the shifter is moved to drive.

There is a supercharger being added to the newest version of the Harley Davidson F-150 collaboration that has been going strong now for ten years. Also, very trick cap-less fuel filler ports will be available on the Explorer this coming fall. These items are Ford’s way of staying fresh – no longer will they let models languish.

Lastly, if something does not work at the consumer level, the process to change or lose it is very quick. Look at the 500 sedan – it was quickly reworked and returned as the new Taurus in less than a year.

Also on hand at the Dearborn press days were the SuperDuty lineups of trucks that have been on sale for several months now, and are doing very well. Its key attractions are a new 6.4 liter PowerStroke diesel, and a new F450 that can haul an unprecedented 24,000 lb. And though they are just new this year, for ‘08 Ford is adding the new rear-view camera that projects its image in the rear view mirror when
engaged.

Heavy Towing
Shortly after returning from Dearborn I was able to get into one of these ’08 Super Duty’s. The fifth wheel equipped F450 I borrowed was used to test an RV trailer called a Cyclone. This 39-foot unit is half garage and half living space; boasts three axles, and is 14,000 lb plus of trailer – empty.  All in all, the truck was not strained.

In addition to the 24,000 lb towing capacity, the F450 will also carry a payload of 6,000 lb and seat five in comfort. And that is no exaggeration – as I was driving the King Ranch edition Super Duty – which among the current crop of interiors is the best Ford has ever fielded.

The key to towing as anyone who does it knows is comfort – inside, outside and in the level of confidence the driver feels. To achieve that feeling, several engineering challenges have to be met – such as power delivered smoothly. That is the first advantage to the new truck. The new 6.4L diesel is a complete generational leap ahead of the old 6L Power Stroke; not only in performance, but in fuel economy and emission levels. The 6.4L delivers 350 hp at 3,000 rpm, and 650 foot-pounds of torque at 2,000 rpm. In real life that meant I could accelerate uphill with the Cyclone on. I also used it to pull out a blown down White Pine stump – check out the picture on page 30. 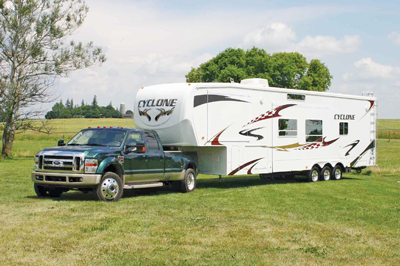 Cruising at any legal speed was easy and comfortable. Another advantage of this new generation of Power Stroke is that it is built with a design aptly named Ford Clean Diesel Technology. It does not smoke, and smell and interior noise is greatly reduced.  You never have to raise your voice to chat inside the cabin. 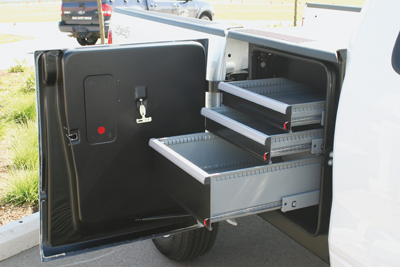 Then there is that comfort factor – apart from the numbers on this page that denote the weight the truck can support – I can attest to the fact that it supports it in a way that communicates confidence and ease to the driver. I felt completely at ease with the weight and length of the trailer on the F450. Everything about the construction of this new Super Duty conveyed a feeling of confidence. If these trucks are any indication, then Ford seems to be back on track.

Howard Elmer is an off-road enthusiast and truck tester based in rural Ontario. He wrote this review for CFI Magazine.