Oct. 28, 2014 - Jacqui Beban was six weeks old when she first saw a logging camp, but her father, Frank Beban, had no idea how profoundly the sights and sounds of chainsaws and haulers would affect her.

Beban, now 39, is a partner with Nootka Sound Timber Co. Ltd. of Nanaimo, a company that employs as many as 100 people and harvests about 300,000 metres annually on behalf of Western Forest Products.

At a time when coastal logging in B.C. faces unique challenges (chronic labour shortages and an estimated 4,500 coastal forestry and logging job openings predicted by 2022), Beban has overcome professional challenges of her own.

The latest was getting used to no longer being a contract logger, which defined her career at Frank Beban Logging (FBL), formerly one of the largest full-phase contractors on the coast (read “Hold ‘em or Fold ‘em” from the Sept/Oct 2008 issue of Canadian Forest Industries).

“Nootka Sound Timber was created in 2011 when an opportunity arose to manage a forest license,” she explains. “We at Beban had the logging experience, and A&A Trading had great engineering and marketing experience, so we formed a partnership. It’s been three interesting years of learning, but I can honestly state that we enjoy a good relationship. We now have a strong team that I’m very happy with.”

That team, a portion of which are long-time Beban employees, are supported in the field by an impressive array of equipment, including a Madill Super Snorkel, Madill 124 swing yarders and 044 grapple yarders.

When asked if the prevalence of Madill machinery is circumstantial or by design, Beban cheerfully replies, “We’ve been fortunate to work with a lot of great suppliers who have supported our business over the years, but at heart I’m a Madill girl! It’s a reliable brand that gets the job done, and our operators like them.” Other Madills in her fleet include a 4800 and five 3800 log loaders; Caterpillar is represented by 980 wheel loaders and graders.

In person, Beban is a curious mix of friendly outdoors girl and tough businessperson: the outcome of being a third-generation logger on her mother Dolores’s side and a fourth generation logger on her father’s. She’s a hands-on partner who is frequently in camp with her crew overseeing operations out of the Nootka Sound region near Gold River.

Given her background and work ethic, it’s difficult for her to analyze her achievements or consider her status in an industry whose culture is testosterone-driven. “I look more at what my family has accomplished than what I’m doing, and I have big boots to fill,” she says.

The Bebans entered the B.C. forest industry in the first decade of the 20th century when great-grandfather Frank, a New Zealand butcher, borrowed money for a ticket to Canada and launched Frank Beban Lumber Co. on Vancouver Island. Frank’s son Jack started the contract firm Beban Logging, and grandson Frank Beban launched FBL (not to be outdone, Jacqui’s maternal grandfather Olaf Fedje, whose Fedje & Gunderson company is still operating today, was once the largest falling contractor on the coast and also the first person in B.C. to operate a one-man power saw).

Frank Beban loved nothing better than logging in the Queen Charlottes Islands, and in the 1970s he brought his four daughters, including his youngest, Jacqui, for summers at Lyell Island; it’s here where Jacqui became fascinated with both logging and the outdoors.

The outcome of negotiations between the First Nation and the federal government resulted in Lyell being designated a national park by the federal government in the 1980s, and in 1987, as Frank was dismantling his logging camp, he suddenly died of a heart attack. His demise was reported as far away as the East Coast, where The New York Times referred to him as a “larger than life” logger.

Initially, Frank’s eldest daughter Cathy assumed control of the company, but when Jacqui turned 20 eight years later she joined the firm and worked in the rebuild shop – which brought her frequently to the camps. “I gained my passion and understanding of our equipment during my years in the shop, and this was enhanced when I was in camp and saw the equipment in action,” she says.

In 1999, Jacqui became general manager-in training, and she learned the intricacies of the business thanks to Greg Kennedy, who was manager of the Port Eliza camp, a 25-minute flight from Gold River.

“I would divide my time between handling office work and my time at the shop, and flying to Port Eliza, where I would ask Greg questions about the different equipment and processes involved,” she recalls. “Then as now, I surrounded myself with good people, and I’ve always made it a point to build strong relationships with my employees – whose knowledge and expertise I routinely rely on. They are the foundations of our business and critical to our success.”

In addition to earning the respect of her co-workers, Beban gained the attention of industry peers by diligently shaping FBL to have the right equipment cutting the proper amount of timber to cope with the volume reductions and narrowed margins facing full-phase contractors during the early years of the new millennium.

In order to compete effectively on long-term or short-term contracts, FBL diversified into mechanical falling and processing: hence the acquisition of feller bunchers with saw heads. Although substantially downsized from Frank’s glory days, FBL handled contracts of 225,000 cubic metres from stump to dump thanks to Beban’s management, with opportunities to bid for more timber.

Although Beban loves forestry because “no two days are the same” and she’s proud of how far it has advanced in terms of safety and sustainability, she acknowledges – somewhat guardedly – that relationships between licensees and contractors have changed in the past decade. “But what’s interesting about Nootka Sound Timber is that it aligns our goals with those of the licensees. They want wood delivered at a specific time, and we deliver. It’s about working together now instead of haggling over rates, which unfortunately is the way business is usually conducted.”

Like many coastal entrepreneurs who have endured the worst of the economic downturns, Beban has become so used to handling challenges that she is unfazed by the future. With regards to widespread concern that there won’t be enough new blood coming into the industry to handle an expected supercycle demand for B.C. timber, she says, “Yes, considering the equipment we use on the coast, in five to eight years we’ll have a real problem finding experienced operators for super snorkels and grapple yarders.”

But as Beban’s father learned generations ago, the best solution to any challenge is to look after one’s crews and treat them as equals: this more than anything will attract newcomers. “A good portion of our equipment operators are in the 55- to 60-year-old range, but fortunately we’re attracting younger people in entry level positions and are training them intensively,” she says. One advantage of Nootka Sound compared to FBL is the company’s ability to provide steady work year-round. “Every bit helps,” she says.

One thing is certain: Beban, who earlier this year was elected the first-ever female vice-president of The Truck Loggers Association (and scheduled to become president in 1.5 years), will remain a hands-on boss no matter what the future brings. “I love this industry and believe strongly in it,” she says. “Bringing new blood into this business makes me feel like I’m continuing the Beban logging legacy in a meaningful way – and there’s no feeling more fulfilling than that.” 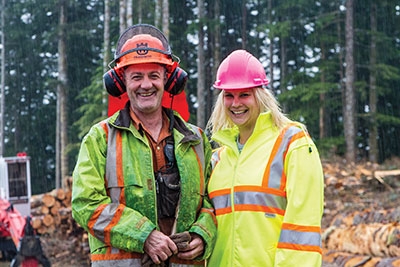 The best solution to any challenge is to look after one’s crews and treat them as equals: this more than anything will attract newcomers. Jacqui Beban was six weeks old when she first saw a logging camp
Print this page