No matter how skookum excavator-based forestry machines have been built in the past, there has always been one bastion of the purpose-built tracked forestry carrier that seemed forever safe – the self-levelling upper. Until now that is, as Volvo Construction Equipment has introduced an automatic levelling system to its line of purpose–built forestry carriers that levels the playing field even more. 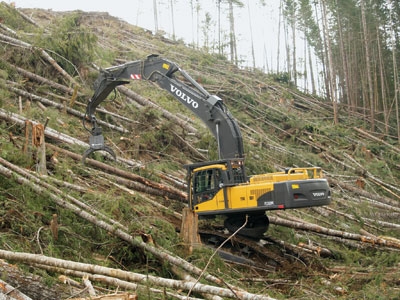 The first Volvo FC3329C with LevelMax works on Vancouver Island. Benefits of auto-levelling on slopes include operator comfort No matter how skookum excavator-based forestry machines have been built in the past

LevelMax is a levelling module for tracked-carriers that automatically levels the superstructure of Volvo’s forestry carriers up to 21 degrees during travel through all access points. The core technology was originally developed in New Zealand under the brand name Sub Flex, and introduced to CFI readers several years ago. The idea was to install a levelling module between the excavator undercarriage and swing ring to enhance the performance, operator comfort and safety of forestry conversions. 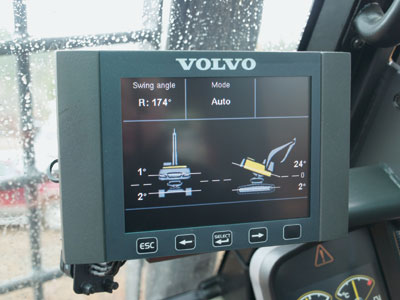 Volvo acquired the rights to this technology in 2007, and has since adopted it specifically for its own tracked forestry carriers. Currently LevelMax is a factory option that will be available on three forestry carriers – the Volvo FC2421C, FC2924C and largest of the series, the FC3329C. As of press time, there were two such machines running, both FC3329C models – one test unit in Korea, and a second logging machine on active duty for BC Volvo dealer Great West Equipment on Vancouver Island since mid April.

“For now, we’ve got the system on three carriers, and as a factory installed option,” explains Volvo forestry manager and forest equipment veteran Ken Kelly. “We are reviewing a plan to offer the LevelMax as a dealer installed option, and we’re also looking at the system as an option for other excavator applications. The official LevelMax launch is underway in North America and planned for Europe in August 2008.”

BC is an obvious target for LevelMax, and Great West’s Roger Dobie says there has been keen interest in the first unit. The Volvo forest carrier itself is already well received here, with some 40 Volvo BFX and C Series units working a range of applications across the province. Adding a levelling module just gives local loggers one more option to consider when spec’ing for steep slope applications. 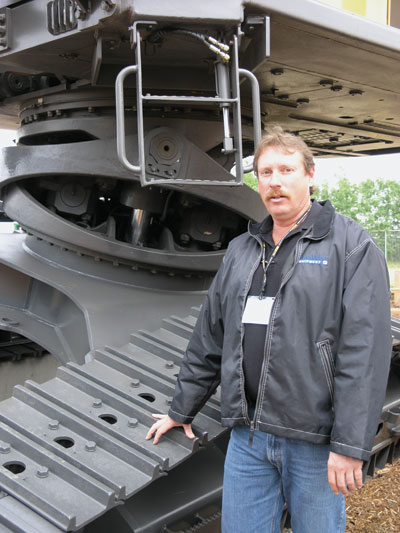 “This machine has been very well received,” Dobie tells CFI. “Loggers are limited only by their imagination, so if you put something like this out in the field, there will be interest.” The demo unit is running a Jewel heel and grapple, hoe-chucking on some steep slopes and handling second growth Douglas fir in the 30-in diameter range. Dobie adds that the range of applications in BC is broad.

“We see a lot of potential in hoe chucking and road-building of course, as well as processing, with the big machine (FC3329C) on the Island, and the smaller one (FC2421C) in some Interior applications. But we’re also getting interest from outside of forestry, from pipe layers, from ski lift installers or hydro tower installers – anyone working in extreme conditions.”

Pricing for the LevelMax system will be comparable to the additional cost of moving from a flat-bottom feller buncher to a self-levelling one. For many rough-terrain loggers, that will be money well spent.