CFI catches up with Gary Ross, plant manager for Tolko High Level, to discuss the mill’s latest projects and learn what’s coming down the pipeline for the 325-person sawmill, one of the most advanced in Alberta. 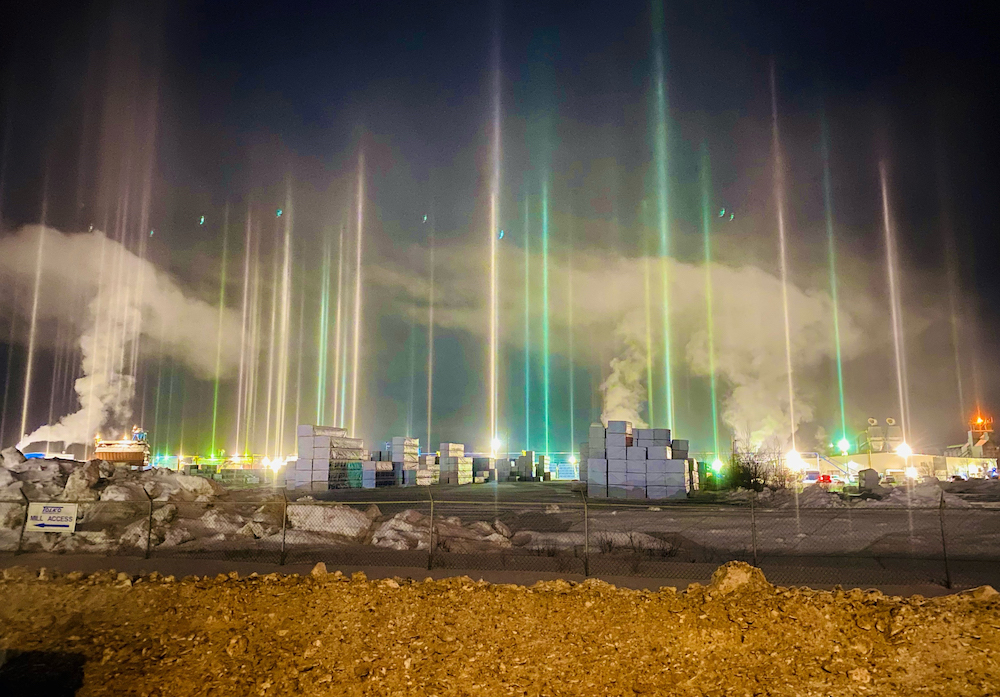 Big things have been happening at Tolko Industries’ sawmill in High Level, Alta., and that’s business as usual for the ambitious team.

The 325-person sawmill has been the site of several multi-million-dollar investment projects over the past few years that have positioned the mill as one of the most advanced in the province. And big things are still to come, says plant manager Gary Ross.

“Lots of good things are coming for High Level,” Ross says in an interview with Canadian Forest Industries. “I can’t say enough about how the company has invested in this asset. And they continue to invest to get the most out of it. It’s really encouraging.”

One of the largest projects the mill has seen to date was the installation of a thermal energy plant to utilize the sawmill’s residuals. That, coupled with a new joint-venture pellet plant on-site, means the mill is adding value to 100 per cent of the fibre entering its gates.

Located within the town of High Level – 730 kilometres north of Edmonton – the mill has been operating for around 45 years. Tolko bought the mill from Daishowa-Marubeni International (DMI) in 1999.

Today the sawmill has 325 hourly employees and is running three eight-hour shifts Monday to Friday with weekends shut down for maintenance and clean-up. The planer mill runs seven days a week less maintenance shutdowns. 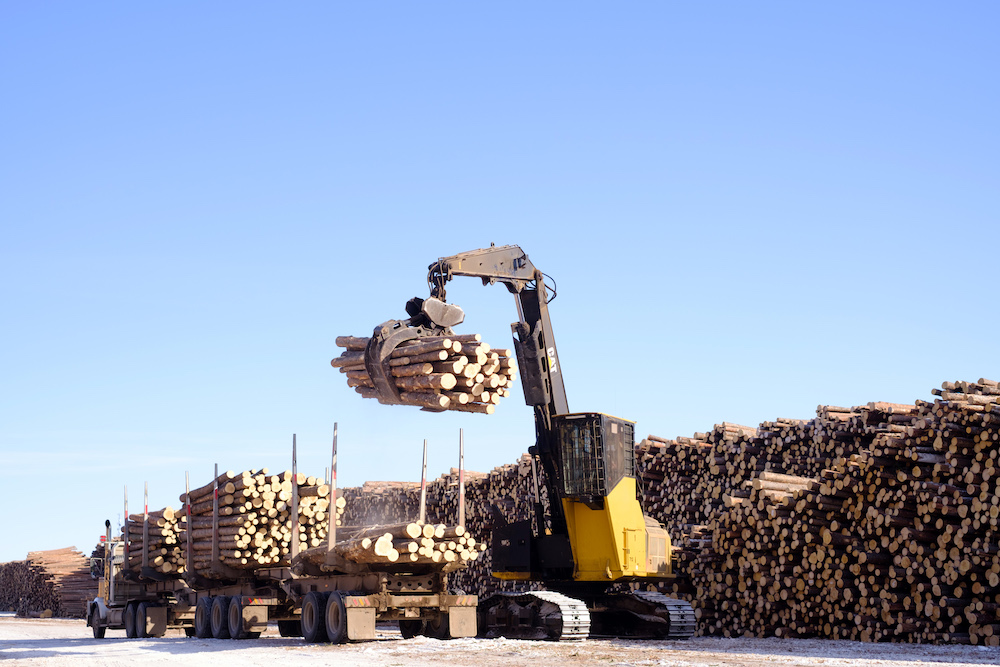 Located within the town of High Level, the sawmill has been operating for around 45 years, more than half of that time as a Tolko mill. Photo courtesy Tolko Industries.

Last year, the three canter-line mill produced 460 mmbf, consuming 1.75 million cubic metres of 100 per cent cut-to-length spruce and pine. Around 95 per cent of that volume is spruce, with the average top size around seven inches.

“One of the unique characteristics about sawmilling in northern Alberta is that we actually have a very small harvest window. All of our logging activities take place starting in December and they are wrapped up by mid-March. Those 1.75 million cubic metres of logs all have to be harvested within that three-month period,” Ross says.

Even in that short window, there are often periods of downtime when temperatures drop so low that the logging equipment can’t run, he says.

To ensure enough volume is harvested during that time, Tolko runs several satellite yards storing full-tree logs that are processed for the mill as needed.

The 12- to 20-foot logs stored in the mill yard are handled first by four Sennebogen high-lift loader cranes. The handlers have large grapples and high-lift capability, which allows Tolko to stack logs up to nine-metres high.

“It’s a different experience when you’re out in the yard and you see a stack of logs nine-metres high that goes for almost a kilometre – that’s how far some of our rows are out there,” Ross says. 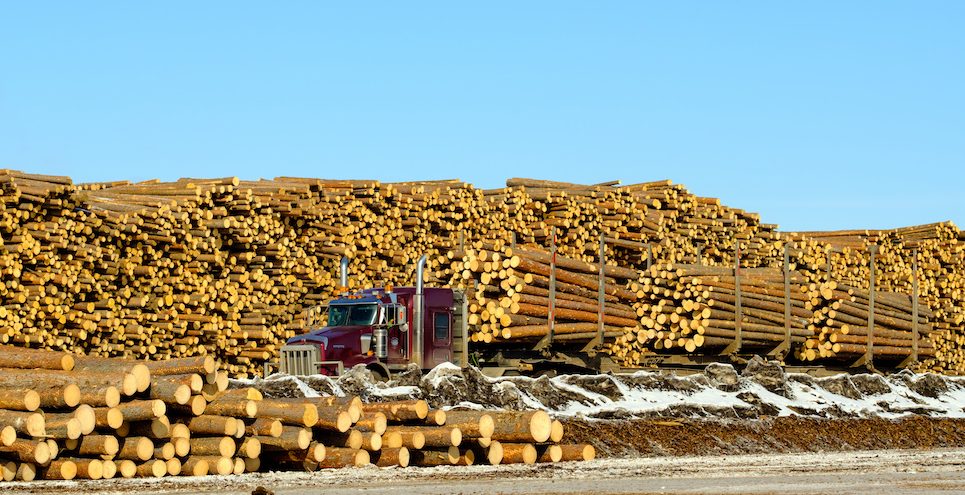 “We’re looking for both productivity and recovery. We try to optimize all three of those canter lines and it’s standardized across all three,” Ross says.

The mill has two USNR edger systems and two sorter lines that both have 60-bin sorting capacity.

“One of our challenges with Northern Alberta with that smaller log size is piece counts. We run a lot of pieces – 85 per cent of our production is coming from a three-inch to six-inch wide product,” Ross says.

Lumber drying happens at one of four kilns – two Wellons continuous dry kilns and two batch kilns – all of which run off thermal oil. A fifth gas-fired kiln is used as a back-up.

Finally, the pieces are planed, trimmed, and sorted in the planer mill. High Level operates two Stetson-Ross planers with Autolog auto graders fitted on the outfeed for consistent and accurate grade scanning and optimization. From there, they are trimmed, sorted, stacked and then wrapped for sale and shipment. 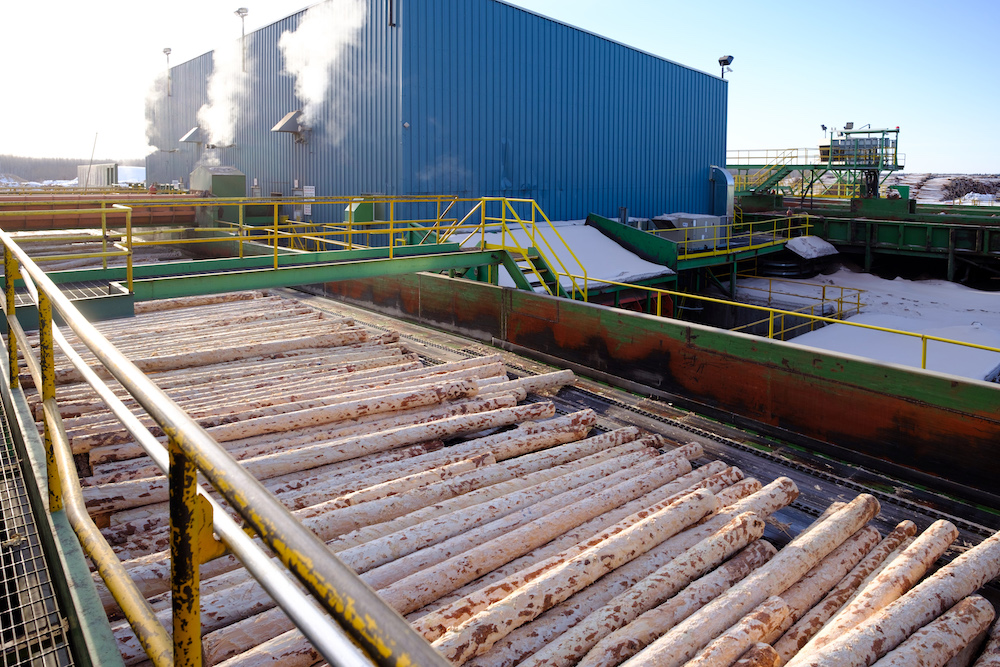 Tolko is eyeing a project to overhaul their debarking process, which would include separating their hog streams. Photo courtesy Tolko Industries.

In May of 2019, lightning sparked a wildfire northwest of High Level that burned more than 350,000 hectares, causing the evacuation of nearly 10,000 people from the town and surrounding communities.

The result for the mill was access to a significant amount of salvage fibre, and they quickly pivoted to take advantage of it, Ross says.

“Putting the mill on full shifting was really driven by that,” he says. “We did about a year and a half of 100 per cent fire-kill volume. We’ve since moved back to green fibre, but we’ve maintained the shifting at the mill.”

Ross says that as a result of High Level’s existing infrastructure, minimal recapitalization was required to manage this volume. “With the three canter-line mill, what’s in the forest doesn’t necessarily match perfectly with what our sawing capabilities are, so we did have to make some minor adjustments in order to continue to operate all three canter lines on three shifts.”

Tolko’s largest projects in High Level have been focused on optimization of the sawmill’s residuals. To make that happen, two massive infrastructure projects came online in the past few years: a wood pellet plant and a thermal energy plant.

The thermal energy plant – 100 per cent owned and operated by Tolko – was also recently commissioned. Construction began in 2018 and the plant was operational in September 2019, with full capacity reached in December 2020. It now provides 100 per cent of the energy used for producing pellets and drying lumber. 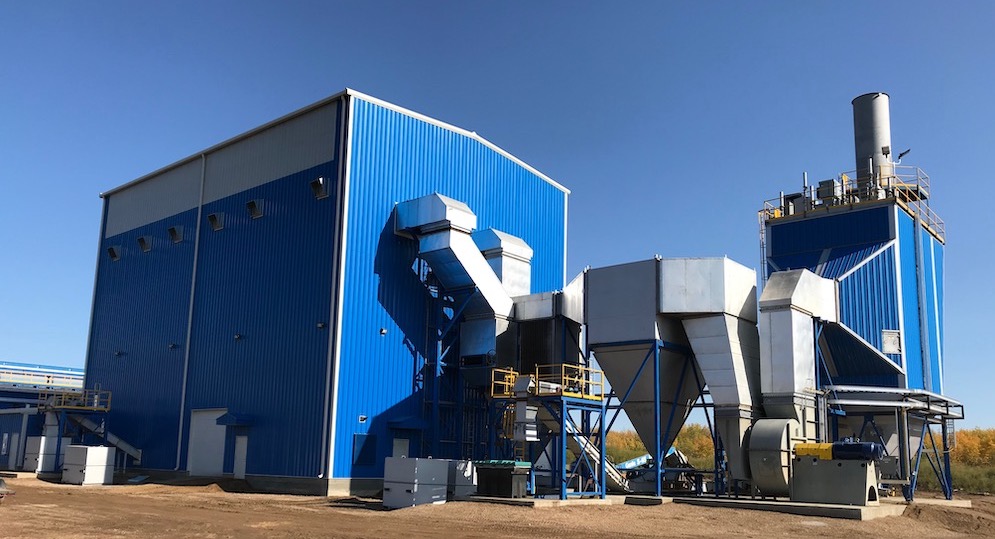 “There’s a lot of pride in that we’re one of the few facilities that is getting to an almost zero balance with all of our residual management. When a log comes to site, we’re utilizing 100 per cent of that log.

“There’s really nothing leaving the site in a form that’s not adding some level of value to a final customer,” Ross says.

Wellons provided the turn-key solution for the thermal energy plant as well as the insulated piping that brings thermal oil to and from the pellet plant and kilns. Excess heat is addressed with a 50 million BTU heat dump. The plant has an electrostatic precipitator (ESP), which separates the fine particulate and removes it from the plant’s exhaust.

“We end up with a really clean exhaust coming out of that energy plant. It’s a very efficient system. With beehive burners we had a lot of ash issues. Ever since the energy plant has gone in, we’ve seen no issues with the ash, so it’s been very promising,” Ross says.

The thermal energy system was designed to match Tolko’s annual hog fuel production in the years before the mill’s ramp up to three shifts. Now that they’ve been consistently running at capacity, the excess hog is heading to the wood pellet facility, which can include up to 15 per cent hog fuel in its fibre mix.

“The pellet facility is at the mercy of rail car supply, so they’ve had to shut down at times. We end up idling our thermal energy plant down, so instead of operating at 110 million BTU where we’re consuming all our hog fuel, we’ll drop it down to 60 or 70 million BTU. But the excess hog fuel becomes an issue,” Ross says. As well, changing the plant’s output takes a toll on the machinery.

To combat this, Tolko is adding a secondary heat dump that will allow them to keep the plant running at full scale. 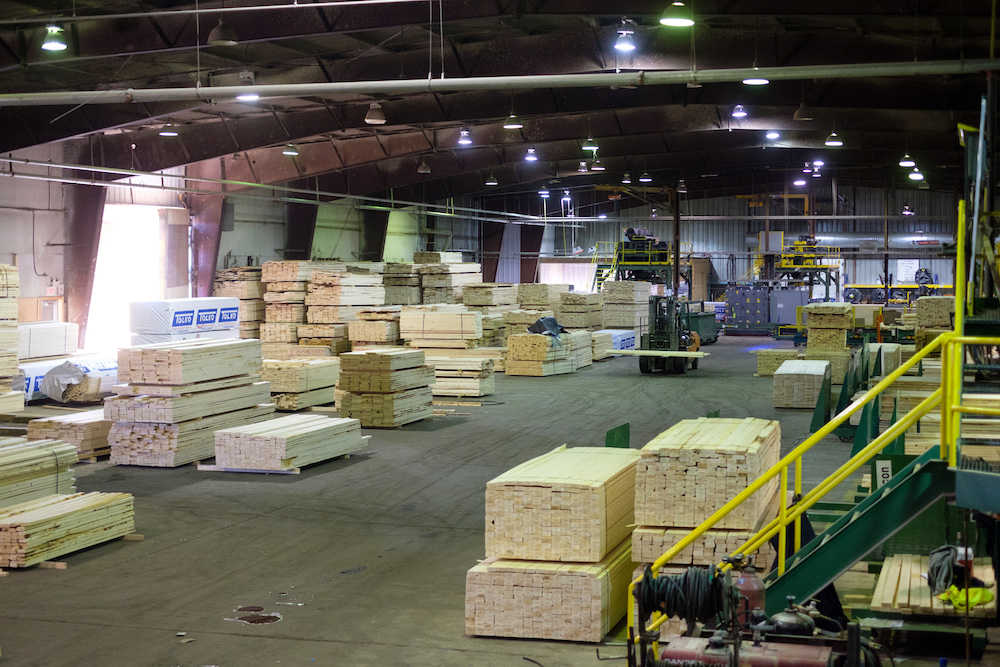 Other site improvements over the past few years include two continuous dry kiln (CDK) conversions, as well as the conversion of their batch kilns to thermal oil. The first CDK came online at the same time as the thermal energy plant, to be used as an outlet for the thermal heat. The second came online in May 2020.

Condition-based monitoring has been an ongoing in-house project for many Tolko mills for a number of years, Ross says. Using a variety of scanners or cameras, a mill’s controls team will develop a monitoring solution specific to a machine centre. If a project is found to be successful, the team will share it with other divisions.

Unsurprisingly, the pandemic took its now-typical toll on the timeline for all of these recent projects, and Ross says they’re adjusting their expectations for future projects as well.

“We’ve got a fairly big list of capital projects that we’re taking on over the next couple of years here and we just know that what used to take six months to a year to deliver now takes 18 months to two years. We’re adjusting,” he says.

Those upcoming projects include a revamp of the mill’s dust collection process, as well as an upgrade to the sawmill’s large canter line. The canter line upgrade will see a new USNR gang installed as well as profilers added to streamline the breakdown process.

Ross says they are also eyeing a project to overhaul their debarking process, which would include separating their hog streams to provide optimal bark sizes for either the thermal energy plant or the pellet plant. Currently all of the bark goes through a Brunette Grizzly Mill hog to get to target size, but they’ve found the energy centre runs better off a larger piece size and the pellet plant benefits from smaller sizes.

A large, first-of-its-kind robotic packaging project is also coming up for High Level, which Ross says could revolutionize lumber packaging. Suffice to say, we will be checking in with the High Level team again soon!

Three years into his management role at the High Level sawmill, Ross certainly isn’t looking to slow down.

“I’m very excited to be a part of the High Level division,” he says. “It’s been a great experience. I’ve been up here three years already – time flies – but to see the growth of the division has been a wonderful experience. We’ve got great people up here and a bright future.”