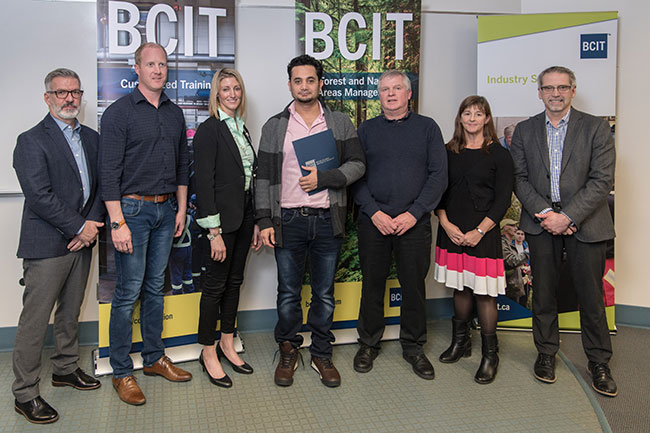 As anyone in the forest sector can tell you, the industry is facing a labour shortage. But four competing forest product companies in British Columbia have joined forces to address this challenge head-on by developing a new educational program, in collaboration with the British Columbia Institute of Technology (BCIT), focused on industrial wood processing.

Those four companies are Interfor, Canfor, Tolko and West Fraser. In 2016, senior representatives from each company met with BCIT to discuss the possibility of creating a new lumber manufacturing program. Two years later, a pilot cohort consisting of employees from each of the four companies started the program, now known as the Associate Certificate in Industrial Wood Processing.

Background
In the mid-2000s, BCIT provided an intensive, two-year diploma program for the lumber manufacturing sector, says Laurie Therrien, BCIT’s manager of corporate training and industry services, who facilitated the initial meeting with industry members in 2016. But the diploma program ended in 2009 because there wasn’t enough interest. It was targeted specifically at students interested in entering the lumber manufacturing sector. In contrast, the new associate certificate is only one year, involving five courses, and targets new and existing sawmill employees in Canada and the U.S. And because it’s online, with only a two-day orientation at BCIT in Burnaby, the employees can stay in their communities and continue to work at the mill while they go to school.

For Interfor, Canfor, Tolko and West Fraser, a critical component was improving employees’ overall skills and knowledge of sawmill manufacturing. Often, employees are very familiar with their particular part of the mill, but don’t have as much knowledge about other areas.

The program was initially created as a way to “grow our internal workforce, so we can train and develop our future mill managers internally for more seamless transitions down the road,” Christina Burke, Interfor’s director of learning and development, tells CFI.

At the initial planning meeting, Therrien created the Sector Advisory Group (SAG), a working committee that included representatives from the founding companies, which helped shape the curriculum and guide the program’s development.

“We circulated a fairly comprehensive survey to a broad range of companies within the forest sector, asking, ‘What are the most important topics to you? What do you want your employees or potential employees to know more about?’” Therrien explains. From there, BCIT created a proposal for the four partner companies, and industry then helped narrow down the course topics.

The program is also geared towards attracting younger workers. Often, recent high school or university graduates don’t look to sawmilling as a viable career option, and there are only a few schools companies turn to for recruiting, Burke says.

However, with this program, “we can go to different schools, with people of any type of degree – arts, commerce, history – and if they have the right leadership skills, say ‘We’ll teach you sawmilling,’” she explains. “We don’t have a line of qualified supervisors lining up on our doorstep to be hired. It’s really hard to find that skillset, and, with this, we’re able to be creative with how we build that.”

Building knowledge
To get the program off the ground, each company provided a subject matter expert on one of the topics, and contributed $20,000 towards the project overall. The topics include lumber fundamentals, sawmill technology, wood processing tools, quality control and kiln drying. BCIT’s in-kind contributions included project management and instructional design expertise.

The first course, lumber fundamentals, explains where the companies source and sell the wood. “All of the companies have assets in both Canada and the U.S., and the fibre baskets are different,” Burke explains. “So, the first course talks about where we get the trees and the different geographies. We focus on the B.C. Coast, the B.C. Interior, Alberta, as well as the Pacific Northwest and then the U.S. South.”

The course also covers how the mechanisms for extracting logs differ in different geographic areas, what kinds of products are produced from each species and what markets they are sold to.

The other four courses within the program emphasize the technical side of operations such as saw filing, which is part of the wood processing tools course. “That part is really cool because folks who are taking the program need to get out and spend time with the head sawfilers, who are the technical subject matter experts. This really allows for expanded knowledge of sawmill operations at the site,” Burke says. 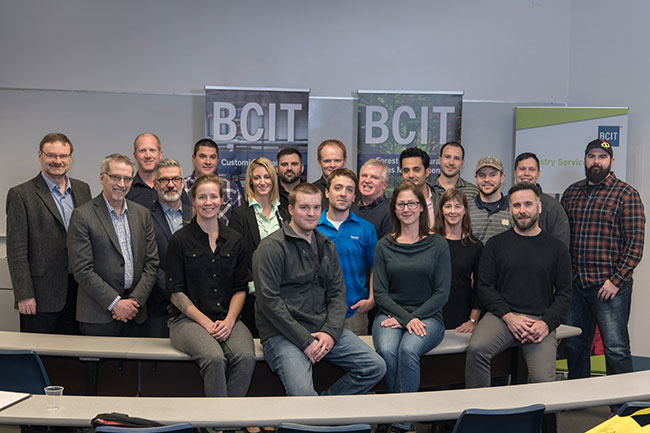 Positive feedback
The first group of students to take the program began classes in January 2018 and graduated in December. Interfor, Tolko, Canfor and West Fraser handpicked the students, who were asked to participate and give feedback.

The feedback was “overwhelmingly positive,” Therrien says. “They’ve given us some constructive pieces that we’ve been able to use to modify certain aspects of the program.”

Based on the success of the pilot cohort, another four cohorts are following the program. Two began in October 2018, while another two began in January 2019.

There has been a lot of interest from industry, with many companies asking when they can participate, Burke says.

Starting in June, the program will run again with two full cohorts.

Student response
Augusto Flores and Ethan Griffin, sawmill supervisor and production superintendent at Interfor’s Acorn division, both participated in the program. Flores was part of the pilot cohort and Griffin is currently taking part in the program.

Flores says the program content was closely related to his day-to-day job and also opened his eyes to other parts of the process he doesn’t often see, such as harvesting.

For Griffin, who comes from an operations background in sawmilling as a labourer and started with Interfor in a safety position, the program is helping reinforce the technical skills he needs as production superintendent. He is also developing a network of peers from his class, which consists of Interfor employees from different regions. One of the major benefits is being able to “bounce questions off each other for best practices and continuing improvement,” he says.

In contrast, Flores’ cohort included students from all four founding companies. “For me, that was great, that it wasn’t just Interfor employees,” he says. “I got to see how other companies operate, their best practices.”

Although the coursework is completed online, Flores and Griffin met the rest of their classmates at BCIT during their orientation near the start of the program, and then again for graduation. Meeting the other students was very insightful for them, and they believe that these in-person interactions help the other students. Overall, both Flores and Griffin agree that the course is very advantageous and will help further their careers.

“I’ve got projects that I want to work on that I learned through the program,” Flores elaborates. “It’s a lot more technical, so my eyes are a bit more focused, and it’s helped me focus more on the overall picture – a broader understanding of sawmilling.

“It’s given me a bit more comradery with the trades, if you will, with all the different departments in the mill. Now when I speak to my filer, for example, I have a lot of facts from this course. It gives me credibility.”

Both Flores and Griffin would encourage their colleagues to apply for the program.

“I think it’s a good investment into people who are young in their careers, and growing, to leverage them to the next position. The information that you’re going to learn here gives you the technical skills that you can apply not only to your mill, but also in the industry as a whole,” Griffin elaborates. 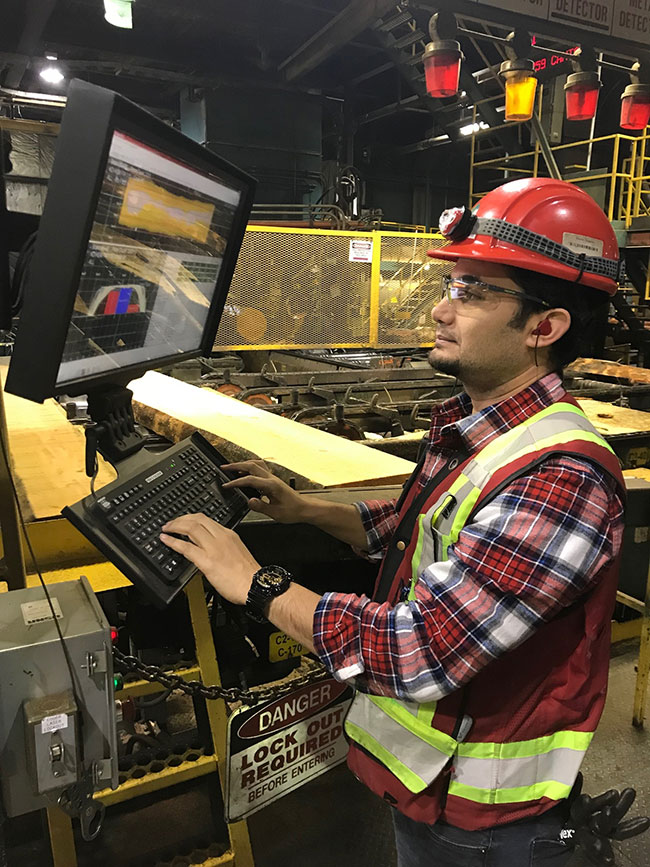 Worth the work
Interfor, Tolko, Canfor and West Fraser, along with BCIT, also see the need for more programs like this in the industry. In fact, another program is already in the works.

“The next associate certificate will be launching spring of 2020,” Burke says. “It’s still in the development phases, but it’s touching on items like operations management, finance, sales and marketing, the economics of the industry.”

In the long run, the four companies hope to develop a diploma program in partnership with BCIT, she says. “The content development was a lot of work, so, going forward, we might look at different funding to hopefully outsource some of that content development.”

Regardless, developing this program has been very cost-effective and beneficial for the companies. Burke says if she created a similar program driven solely by Interfor, it would require a lot of resources and could be at risk during a financial downturn.

“It’s very cost-effective going down the road with BCIT, because we don’t own the platform. They host it, they have the teachers, they run the admissions,” she says. “It costs us $4,250 total for an employee to get 12 months of formal education of up-to-date, very relevant, highly technical sawmill operations training.”

For Therrien, working with the industry has been a “fantastic” experience.

“It’s been almost unprecedented that a group of companies that would normally be quite fiercely competitive in their sector actually come together in an extremely collaborative fashion, and they continue to collaborate because they recognize that, in terms of this education program, they would all win if they tackled this gap collectively,” she says.