Sept. 27, 2018 - When 27-year-old Francis Brulotte sits in the cab of his brand new eight-wheel Komatsu 931XC harvester, his eyes light up as if he were a young boy receiving a new toy he’d been dreaming of for years. “I’ve always been fascinated by Komatsu machines and particularly Isuzu engines since they are heavy-duty and fuel efficient,” he says. 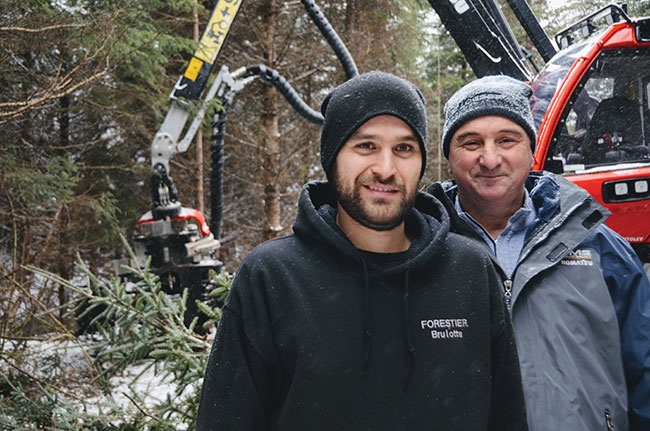 Francis convinced his father, Richard Brulotte, owner/operator of Forestier Brulotte, to give the new Komatsu model a shot. It’s the first 931XC model sold in Canada. The purchase was timely, since the son took over partial ownership of the southern Quebec contractor this year.

“I wouldn’t have bought it if I was by myself,” Richard says. “I invested because he will have 49 per cent of the company’s shares this year.” At 55 years old, Richard is beginning to think about retirement.

Regardless of which harvester they chose, one thing was certain: they wanted a wheeled machine to reduce ground pressure. “It’s what we needed to market our logging services to private woodlot owners and stand out from the competition,” Richard says.

The Komatsu not only has a smaller footprint than the Brulotte’s former harvester, it is also fuel efficient with an average consumption of just 17 litres per hour, which represents huge savings for the contractor. “All the fuel we save translates into profits that go directly into our pockets,” Francis says.

SMS Equipment supplied the machine to Forestier Brulotte. Sales rep Donald Tessier says when it comes to an eight-wheel harvester, the 931XC has improved comfort and increased traction. The added stability is an important advantage for operators working on rocky terrain, Richard says.

During CFI’s visit, the Brulottes had purchased the machine just a few weeks earlier, so it was hard for them to get the true measure of increased productivity, especially since they were doing commercial thinning woodlands belonging to Solifor in Rivière-à-Pierre. “In a few weeks, we are going to a forest with more than 200 cubic metres of wood per hectare. We’ll soon see how tough the machine really is,” Richard says.

For the time being, there is every reason to believe that productivity will increase. “After nearly two weeks, I’m already at the same production level that I had with our tracked machine,” Francis says. With its four feed motors and as many rollers, the C144 head is much more productive. “Even if productivity remains the same, or is 10 per cent higher, we will come out on top since we consume 25 per cent less fuel. We’re in business,” he says.

For Richard, the C144’s power is a definite advantage since he often harvests hardwood stands in southern Quebec.

Another strong point of the 931XC is its field of view. “On a tracked machine, we’re used to having the engine next to us. Now, to select trees, we see much better with the parallel boom. It’s completely different,” Francis says.

There are also three independent hydraulic pumps for traction, the head and the swing. “If the machine needs more oil, it will take it from another pump, which makes it very efficient,” Tessier explains.

To keep up with the production of the Komatsu 931CX, Forestier Brulotte also acquired a 2016 Ponsse Elephant forwarder. “As is the case with SMS Equipment, we opted for that particular machine because of the customer service we’ve enjoyed for several years with LN Machinerie. For us, service is just as important as the machine,” Richard says.

which has allowed them to drastically reduce their fuel consumption.

Like father, like son
From harvesting with horses, to tractors, to skidders and now with ultramodern machines, Richard has seen pretty much everything since he started out as a young man logging with his father nearly 50 years ago.

Despite this early life experience, as an adult he turned to construction work in James Bay, during which time he purchased several woodlots. In 1991 he ventured back into the logging world, purchasing a skidder and starting up his contracting business in Saint-Denis-de-Brampton, in the Eastern Townships of Quebec.

Francis has always been immersed in the logging world, so much so that at 10 he was operating his first skidder.

“I logged by hand and Francis hauled the trees, but he was not allowed to get out of the machine,” Richard says. At 14 years old Francis was on the chainsaw, and at 17, as soon as he finished school, he began operating a harvester.

“I am truly passionate about my job and I would be unhappy doing something else,” Francis says. “It feels good to be in the bush, no one to bother us.” Despite his young age, Francis has always adapted really well to the logger lifestyle, Richard says.

Whether its operating on private woodlands in the Eastern Townships, or logging for Quebec forest associations like Saint-Raymond, Forestier Brulotte tailors its services to the needs of its clients to be able to make a living from the forest.

The Brulottes feel it’s not necessary to continuously expand their company to make a good living. In the region some contractors have even decided to reduce their number of machines, going from two to one single “kit,” which is more in line with their niche in private woodlots. “Owners don’t like seeing four huge machines arriving at the same time on their properties,” Richard says. Fewer machines also means there is less maintenance costs.

The Komatsu 931XC is still a fairly large machine. But since it is mounted on tires with better load-bearing capacity, it is perfectly suited to private woodlot operations, Richard says. To minimize spacing between the rows of trees to be harvested, Forestier Brulotte had a special 10-foot wheelbase designed at Chaines Suprême. “In our market, it was out of the question to have an 11.5-foot width,” Richard says.

With two crews of just two people working four 12-hour days in a row, Forestier Brulotte does not work during nights. “It’s not our policy. I would rather do one weekend a month than work at night,” Richard says. Sticking to the day also helps reduce equipment breakdowns, he says.

To work year-round, Richard operates on his own private woodlots, and buys more property from time to time, which allows him to maximize the use of his machines.

Armed with a brand new comfortable and efficient machine, Richard and Francis now believe they are well equipped to meet the greatest challenge before them — customer satisfaction.