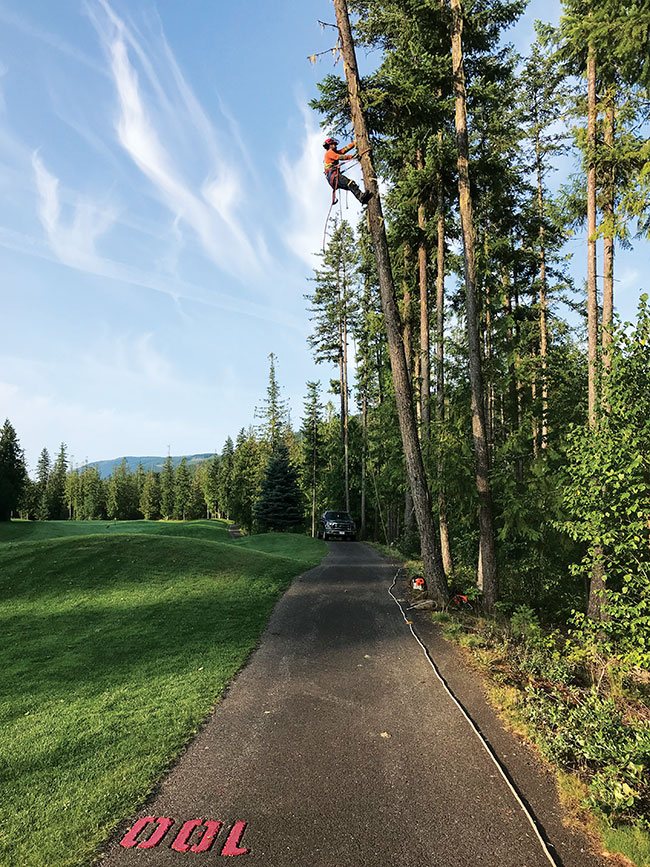 Vic Hooper and his son Jared are a rare find in the B.C. Interior forest industry. Based in Armstrong, B.C., the duo work as hand fallers, logging contractors, brush cutters, and firefighters – taking on whatever job is needed at the time to keep the paycheque coming in.

Diversifying their skills and customers has allowed the father-son team to remain self-employed during the peaks and valleys of the industry.

At 28 years old, Jared is in a very small percentile of certified hand fallers under 30. The job is hard to get into and difficult to stay in, he says. Gone are the days of picking up a chainsaw and “becoming” a hand faller. Today the job is heavily regulated, for obvious safety reasons, and to become officially trained and certified is an expensive process with no guarantee of a job waiting for you.

The demand for hand fallers in the Interior is even lower than in other areas of B.C. “If I wanted to stay busy all the time with strictly hand falling, I’d have to be all over the place, travelling out to Revelstoke or the Coast,” Jared says.

To keep busy at home, Vic and Jared have earned and maintain a handful of contracts that require their flexibility as a small, low-impact harvesting and tree removal company.

Diverse resumes
Vic worked as a foreman for larger logging contractors in the B.C. Interior for more than 12 years before striking off solo in 2002. “I had four kids in school and the foreman job turned into a 24-7 job, so I pulled the pin on it,” he says.

A year after he quit, Vic bought a Timberjack skidder and launched his own contracting business. Things were going well until around 2007 when the forest industry tanked and work in the BC Interior dried up. “The skidder actually sat home for two years. I went and worked construction,” Vic says.

Vic’s oldest son, Victor, who used to run the skidder for him, changed careers during this time, and now works for forest consultant company Atlas Information Management in Kamloops.

In 2009, Vic restarted the Timberjack and began working odd jobs as a skidder operator and faller, mainly on private properties doing woodlot management. When the B.C. wildfire season peaked each year and logging was no longer safe, Vic kept himself employed by working as a firefighter with the BC Ministry of Forests.

Jared got his toes wet in logging when he was 14, working for his dad’s company as a bucker in the summers between school years. He began working full-time for Vic after high school, in 2006, but a year later he was out of a job. That’s when Jared started a nearly 10-year stint as a firefighter for the BC Ministry of Forests. The seasonal work meant he could return home in the winters to log with his dad.

In 2012, Jared officially launched JD Forest Management and began taking on larger contracts. “I deal with, basically, the contracts that have more paperwork,” Jared says with a laugh as Vic nods in agreement.

Low-impact logging
For the most part, the harvesting contracts Vic and Jared take on are for selective logging of high-value mature fir or cedar in crown or private woodlots. The Federation of British Columbia Woodlot Association estimates there are more than 20,000 woodlot owners with forest holdings 20 hectares or more in the province.

The old Timberjack 380A skidder is still a staple piece of equipment for Vic and Jared. Vic runs the skidder while Jared hand falls and they buck together. In order to minimize disturbance to the surrounding forest, Vic and Jared use a herringbone harvesting method to allow the skidder to easily drag the logs out of a main trail.

This year Jared purchased a used Timberjack 735 excavator with a bucket and thumb, along with a Rotobec power grapple. The new machine means Vic no longer needs to build landings, trails and decks with the skidder, which was a cumbersome job and left a larger footprint. The excavator easily builds the landings and trails, and is able to hoe chuck and deck the logs with minimal disturbance to the environment.

“It’s an older unit, but, being the size of company that we are, we have to be fairly mechanically inclined. We don’t hire out any of our mechanical work other than, say, if we needed a new engine or to rebuild a hydraulic pump,” Jared says.

For chainsaws, both men are partial to Stihl. Vic runs a Stihl 461 with a 28-inch bar, and says his partiality to Stihl grew after they came out with an improved anti-vibration model many years ago. Jared also runs the 461 with a 28-inch bar, and has a 660 with a 32-inch bar for larger wood. Paul Halvorson, owner of Enderby Rentals, is their go-to supplier for the Stihl saws.

“We’ll go into areas that we have 10 loads or less to do, but we can afford to do that because our overhead is a lot lower than a larger contractor,” Jared says.

JD Forest Management’s two main contracts are with the BC Ministry of Forests for danger tree falling during the wildfire season, and with Glencore’s Brenda Mines – a closed copper-molybdenum mine site in the central Okanagan – for brush cutting and tree clearing during remediation.

Vic and Jared also hand fall as subcontractors for some of the larger loggers in the Interior. “Where they can’t go with their bunchers, we’ll pull a day or two,” Vic says.

Another segment of the business, and one that is growing, is FireSmart vegetation management. FireSmart – an initiative from the organization Partners in Protection – aims to reduce the risks from fire in the wildland/urban interface. Managing the fuel loads near residential properties is one way of reducing that risk. JD Management is available for homeowners who want trees removed to “FireSmart” their properties.

“You really have to plan things out to stay busy. It can be a bit of a juggle; sometimes things wrap up early or sometimes you hit a snag and things finish up late,” Jared says.

Depending on the job, Jared and Vic will charge hourly or by volume. Logging is almost always negotiated by the cubic metre, but municipal maintenance jobs as well as danger tree removal for the ministry are billed by the hour. 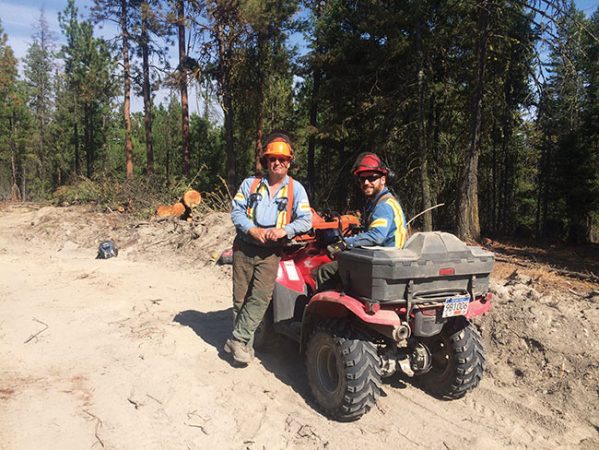 Vic Hooper (left) and his son, Jared (right), are certified as danger tree assessors. During wildfire season, they are sent into recent burn areas to make it safe for wildland firefighters to enter.

Ahead of the firefighters
Jared and Vic are two of a few dozen fallers in B.C. who are certified as danger tree assessors. This designation means they can be sent into a recent burn area to make it safe for wildland firefighters to enter and put out hotspots.

“We’re going through ahead of the fire crews and dealing with burned trees that are what they call ‘imminent risk of failure.’ So, trees that are going to come down soon,” Jared says.

“It’s definitely the most interesting part of our jobs. You’re falling burning trees and dealing with dangerous situations,” Vic says.

Since the carbon from the charred wood is hard on machinery and wear parts, Vic and Jared use their older, retired chainsaws for these jobs.

Changing landscape
Keeping their costs low and customers diverse has allowed Vic and Jared to stay afloat all these years. The same cannot be said for many of Vic’s former colleagues and employers. Every company he has worked for has since closed up shop.

“It’s like a revolving door now for contractors,” Vic says. “I used to know everybody when I was a foreman. I would go to all the association meetings and I knew who everyone was and what they were doing. Now, there are two or three I know of here. But they’re constantly changing. People have sold out, or they’re coming in for jobs from all over the province.

“I know of lots of small contractors like us, our size, and they’re all out of the game. Their skidders are parked out back with trees growing through them,” he adds.

As the B.C. forest industry continues to evolve with new government policies either incenting or hampering growth of the sector, JD Forest Management’s role will continue to adapt as needed.

For now, both father and son are content filling a small niche in the Interior, close to friends and family, where they can be home every night.

“It takes a particular person to become a faller,” Vic says. “Not everyone can do it, but we’re glad we do.”