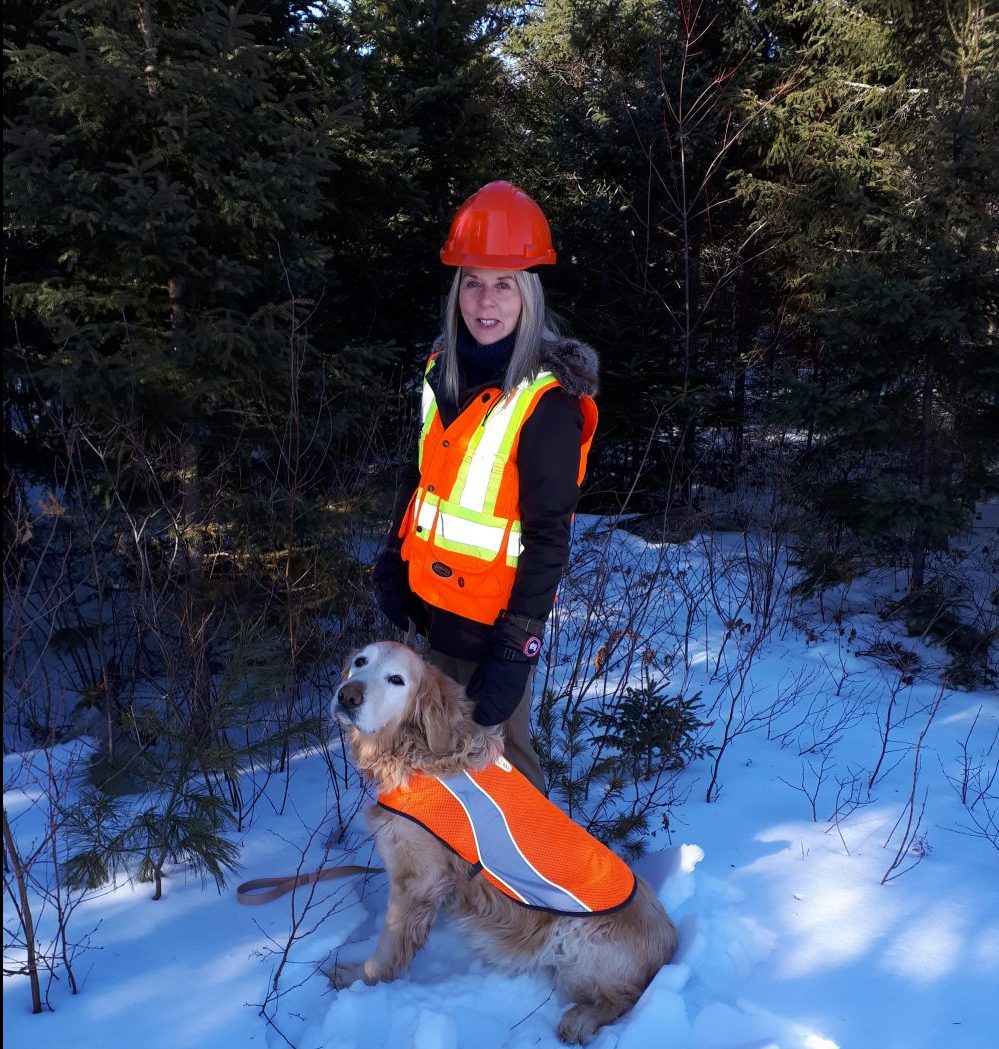 Julia McMillan knew when she was a young girl she wanted to be in forestry like her father. Her passion led her to graduate from her father’s alma mater, the New Brunswick Maritime Forest Ranger School, in 1986. They were the school’s first father-daughter graduates. Today Julia and her husband safety own a Nova Scotia harvesting company specialized in selective harvesting. For years, she has been working with forest contractors in the province to help with their bookkeeping and programs.

CFI: What led you to become a forestry technician in the ’80s?

My father, Donald Edling, was my idol. He faced a lot of hardship when he was young. He went to forest ranger school with a Grade 8 education and was highly successful in passing the course. He became a very successful chief scaler for the department of natural resources in New Brunswick. I grew up with the stories of forest rangers.

When I was younger, my father was adamant that I would become a mother and a nurse. But in Grade 5, I decided I would be a forest ranger like him. He wasn’t sure. He was old school and he understood that it was going to be a lot more challenging for me as a woman at that time, especially being a small person.

He would test me to see if I was capable and competent enough to survive it. That meant when I was 10 or 11 he brought me in during moose season and would say, “OK you’re going to cut the tongues out of the jaws of the moose. I’m going to show you how. Can you do that?” And I said, “Of course I can.”

He never set me up to fail, but he wanted to be sure I was going to have the skill set to succeed because he knew it was going to be tough. When I was 15 I went tree planting, and boy was it hard! And my father said, “Are you done now?” And I said, “No, I’m going back.”

I loved it! What dad was missing was that, as tough as it was physically, I really loved it. When I had the acceptance letter come from the forest ranger school, he was proud. He knew then I was going to make it even though there would be many challenges ahead.

My father passed away four years ago at 86. He handed me the torch. Earning it means a lot to me.

CFI: What is it about the industry and your current job that you enjoy?

My husband and I have a logging operation in Nova Scotia and we mostly do sustainable, commercial thinning logging. He’s a forestry technician of 40 years. We have 1,500 acres of land and do silviculture, pre-commercial thinning and things like that. We do everything and we can tag team because we’re both forest techs and we both own the company. I do mostly the book work and some woods work now, but not as much as I did back then. We only have three machines now versus five.

About seven years ago when we downsized, I branched out to work with other forestry contractors. One is Darrin Carter Logging in the Amherst area. I helped implement a more sophisticated safety program in the woods, and now I’m doing some book work for them as well.

I’ve developed, out of the blue, a mentorship with the men in the woods, on the ground. We spend a lot of time discussing professionalism, and changing our image in the forest industry – especially in Atlantic Canada. I really like that.

I’ve seen in the last year with this forestry crisis in Nova Scotia – and it’s huge right now – I can see myself mentoring and developing more our image and respect for the forest industry, especially for loggers. I see that our reputation is so poor and it saddens me. I’m in a world among some of the best and most respected people that I care for, but outside, especially in urban areas, we are not a respected group. Farmers are, fishermen are, but forestry people aren’t. I would like to take on more of a role of developing and educating to bring respect to our industry. I didn’t plan on that, but I see it as a huge need.

CFI: Do you find there are particular challenges or hurdles for women in the industry? Have you faced any?

I see the physical challenge better. Especially in the ’70s, ’80s and ’90s. Physically, it was very challenging. We worked alone most of the time. No cell phones, radios or 4×4 trucks. You went in with your skill set. But with technology now today – GPS, mapping, the Internet – the work is far better and safer today. It’s not a challenge so much now for women.

I think the old boys club is the challenge now for women – we all know that. I go to meetings and there may be half a dozen women out of 100 men, every time. Sometimes I’m the only one. I look around and wonder why. I think today it’s lack of understanding and education when we’re young and in school that there’s an opportunity there for women.

You don’t always have to prove that because you’re a woman you can do what they do. If you have the skill set and you’re passionate and you are there to do the job – not there to make a point – you will overcome the challenges and obstacles. Do it for the right reasons.

CFI: Do you see the culture of the old boys club changing?

I think so and I think the younger millennial men will make more of that change. We can change the language and the dialogue. Women don’t have to swear and chew tobacco to fit in. You have a skill set and you do need to earn respect, and you will be tested, but men are tested too.

I see of lot of men and contractors realizing there is a real role for women to play in the logging industry or in DNR. We bring a different skill set. Perhaps a listening or communication skill. We look at problems differently and see them differently, and having a different perspective than men sometimes helps solve the problems.

CFI: What advice do you have for women considering a career in logging?

I hope we can get out there and show young girls, and boys, what’s out there for the industry. I hope grandparents take their grandkids and show them. They need the exposure and to be engaged at a young age. I think if more forestry people did that, in the schools or their neighbourhoods, we could encourage them.

My advice is that we’ve got to stay above the bar in professionalism in the forest industry as women. If you don’t like the boys club, don’t become one. Stay professional. We don’t have to have that image anymore of colourful language in the woods. As the environment becomes less like that, you’ll attract more women.

Don’t play the female card though – have your actions earn you respect. No matter who you are, where you are, if you do what you say, you will be respected. In any industry but especially the forest industry that’s a male-dominated world, let your actions speak for you.

And ask for help. I think men and women who ask for help are the smartest people out there. It’s OK. And I think our world today, finally, is OK with that too. It’s not a sign of weakness. The smartest contractors that I know – and Darrin Carter Logging would be one – they don’t know everything and they don’t profess to. But they align themselves with people that do.