June 13, 2017 - Dallan Holdings, a mill yard services company based in Thunder Bay, Ont., exemplifies what a company can accomplish when it focuses on its people. Co-owner and general manager, Dale Levesque is the man behind that focus. 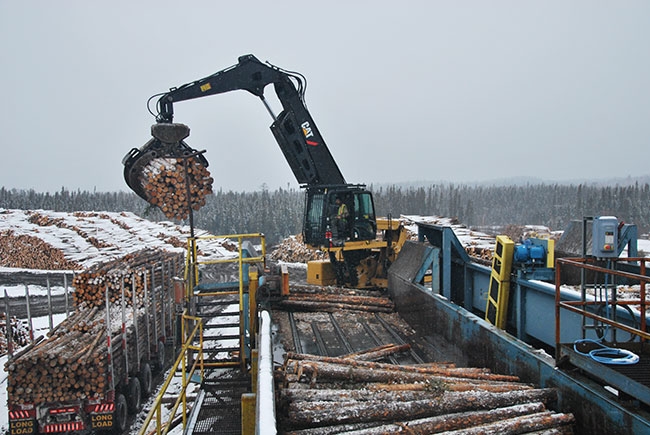 “I have a strong team and workforce behind me. Numerous employees have been working with me since 2003. I’d call it more of a friendship,” Levesque says.

The company’s origin story begins with Levesque. Born in Marathon, Ont., 300 kilometres east of Thunder Bay, Levesque is a member of Fort William First Nation. In 2003, Levesque took on a job as an equipment operator for North American Mill Yard Services, which was at the time contracted to the Thunder Bay sawmill – then owned by Bowater.

Levesque was soon promoted to site manager and in 2010 he purchased the company and retained its name. Four years later, the company partnered with the two First Nations and formed Dallan Holdings.

The company’s first new contract was in April 2014 to provide yard services at the Resolute Thunder Bay Pulp and Paper mill. Later that year Dallan was awarded yard contracts for Resolute’s newly opened sawmills in Ignace and Atikokan, both of which are more than 200 kilometres outside of Thunder Bay.

“Ever since then we’ve invested $10 million into heavy equipment, and grew from 35 full-time employees to the 120 we have today,” Levesque says. “We are 100 per cent self sufficient in that we supply the equipment, the operators, the fuel and we are responsible for all maintenance of equipment, training our staff and ensuring a safe and environmentally friendly operation.”

At the three Resolute sawmills, Dallan operators handle all of the mobile equipment outside; unloading trucks with log loaders, feeding cut-to-lengths into the mill, offloading the lumber from the outfeed, transferring lumber into the kilns, reloading dry lumber into the mill for planing, and loading trucks and railcars with forkslifts. Dallan also handles all yard maintenance including snow removal, road grading and road building.

At the Resolute pulp and paper mill, Dallan is responsible for all the bark transfers on site, as well as feeding wood-fibre biomass into the mill’s two biomass boilers that supply electricity to the mill and to the province’s power grid. Dallan also takes care of the pulp and paper mill’s landfill management plan – handling the transfer of ash to the landfill.

“Our operation at the pulp mill runs 24/7 so our employees work numerous shifts in order to meet the needs of the customer,” Levesque says. Break coverage is also in place to ensure smooth and continuous coverage.

CAT-erized
Levesque describes himself as “CATerized” since more than 95 per cent of his fleet is Caterpillar. The brand has been good to him, he says.

“It makes a big difference when you have all of the same equipment; spare parts are similar in all the machines and when we do training for our mechanics we only have one group that we need to work with,” Levesque says.

“Our machines run about 200,000 hours a year,” Levesque says. “The work we do can be hard on equipment so effective maintenance systems are integral, but we are always willing to invest in new equipment when it makes good business sense.”

Replacing the machines is not an easy – or cheap – feat. Dallan’s wheel loaders are customized to handle significantly more mass. “They’re good for 20,000-pound lift capacity – they’re about $450,000 a piece. That’s the majority of what we have, upwards of 16 of them between all four operations,” he says.

The machines are operator friendly, Levesque adds. “The guys really like the way they handle. Of course they’re brand new so they love that kind of equipment more than anything.”

Hiring right
Souped-up machines are important to the efficiency of the business, but the core of its success will always come down to people, Levesque says.

The company frequently hires to accommodate for its growth, which is at the moment tied to the sawmills and pulp mill. “Resolute is my only customer today, so as they grow we grow with them,” Levesque says.

Between a quarter and a third of Dallan’s staff is made up of Aboriginal people, the bulk of whom are from the Thunder Bay area, which is on Fort William First Nations land. Hiring for the company’s operations in Atikokan and Ignace is more of a challenge because of smaller populations and more competition for jobs.

The training program for a job at Dallan is generally four weeks but varies based on previous experience and skill. It typically takes the company trainers between 120 and 160 hours to train someone with no prior experience. The turnover rate is fairly low across the company, Levesque says, especially in Thunder Bay where the skilled labour pool is generally larger.

“We have a solid employee selection process, we don’t just hire anyone. We definitely want the best people if we are going to be the best company,” he says.