The study – a collaboration between researchers with the Canadian Forest Service’s (CFS) Laurentian Forestry Centre and Université Laval’s Faculty of Forestry, Geography and Geomatics – used remote sensing technologies to estimate the spatial distribution and theoretical availability of biomass sourced from harvest residues and fire-killed trees nationwide.

“We were trying to quantify, estimate, and locate where the potential for bioenergy existed from harvest residue and fire-damaged stands,” explains Nicolas Mansuy, a forest landscape researcher and the principal author of the study. “We wanted to see if you could use these resources, and gain an idea of the variability and volume available each year.”

Using maps detailing Canada’s forest attributes, as well as annual fire and harvest data between 2002 and 2011, Mansuy and his fellow researchers were able to calculate annual estimates of biomass availability for both harvest residues and fire-damaged trees – no small feat given the unpredictable nature of forest fires.

“The harvest residue is pretty stable year over year,” he acknowledges, “but the fire is more volatile, because we don’t know where the fires will hit the forests each year.”

What the researchers found was an abundance of untapped and potentially viable biomass material.

“We have a lot of clearcuts in Canada, and a lot of fires, and based on those disturbances we have a lot of residues that are not being used by traditional forestry.”

The study’s findings, which were first published in the scientific journal Biomass and Bioenergy, could have a significant impact on the provincial, national, and international outlook for the biomass supply chain in Canada. First, though, researchers will have to work with regional and provincial stakeholders to validate their findings on the ground and assess the viability of establishing cost-effective supply chains.

For his part, Mansuy is hopeful that the study, which is the first of its kind to attempt a nationwide biomass inventory using a remote sensing approach, will ultimately facilitate comprehensive assessment of biomass location, costs and logistics, support decision making in the bioenergy sector, and help to establish consistent national biomass metrics in the years to come.

“It’s really hard to knock on the door of each province and ask about their biomass inventory,” he explains. “The benefit of the remote sensing is that we can work nationally, and use the same method to collect new information and reach our calculations each year. Besides, the quality and the resolution of the product are going to improve in the near future.”

While the study’s findings could prove a real boon for biomass stakeholders in Canada – where they could help spur BioFuelNet Canada’s vision of a sustainable and globally competitive Canadian bioeconomy – they will likely also be well-received in Europe, which depends on bioenergy to a much greater degree than Canada due to government policy and its relative dearth of oil and natural gas reserves.

“The demand for renewable energy is very high in Europe,” says Mansuy. “The European market is already very robust, so they require a lot of imported biomass both from the U.S. and Canada.”

Mansuy stresses, however, that the key in any future development – whether it’s the establishment of regional supply chains, or more significant export agreements – will lie in developing practices that are environmentally sustainable, an important facet of supply chain development that other nations have overlooked in the past.

“In Canada, the sustainability of biomass harvesting is very important. It’s a great advantage for us to have so much biomass here in our country, but we want to ensure that we’re managing it properly to maintain healthy ecosystem resilience. It’s important to leave an appropriate amount of residue in the forest to maintain the ecosystem there, so we have sustainability constraints that we have to take into consideration.” 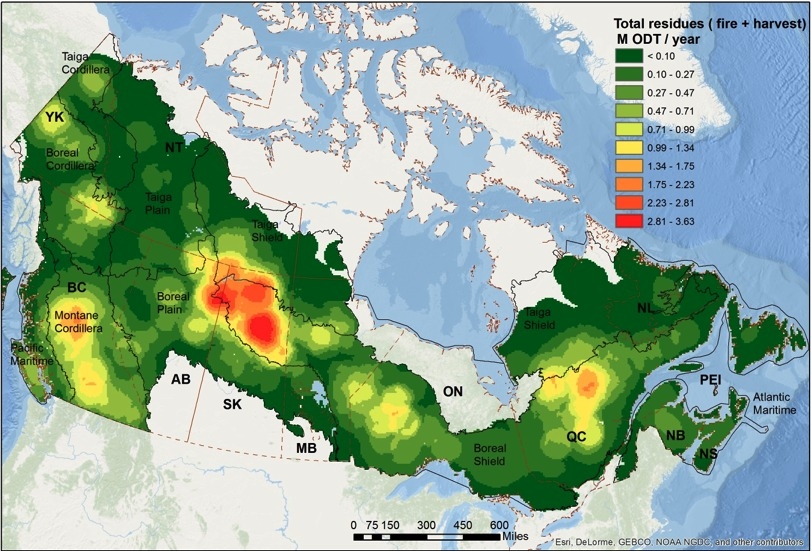