Luc Gauthier had a lot at stake when he was deciding on a new log-handler – about 1500 metric tons per day, in fact. 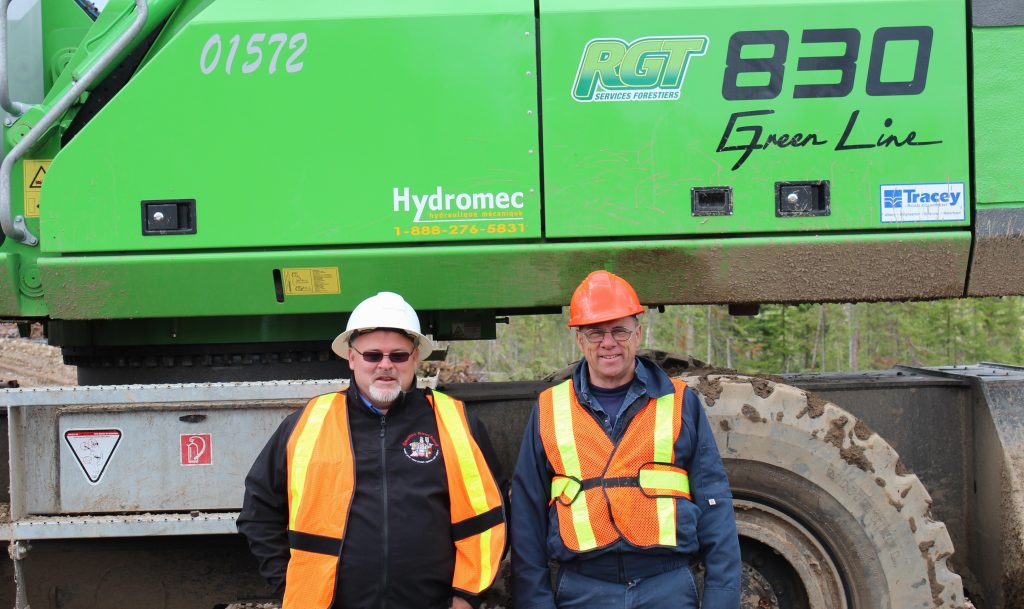 Gauthier manages the transportation services provided by Services Forestiers R.G.T. for the Remabec Group logging camp at Saint-Ludger-de-Milot, Lac-Saint-Jean in northern Quebec on behalf of ARBEC Forest Products. The company is responsible for every aspect of moving logs from the camp to the mill: loading, trucking, road maintenance, and all the equipment that goes with it. So Gauthier and his team don’t easily go “out on a limb” when they make a critical equipment purchase.

Watching another load swing to the waiting truck, he stands by the new SENNEBOGEN 830 M-T that arrived at his site six weeks earlier. “We are getting results,” he says simply.

According to the company, the 830 M-T is engineered for both fast loading cycles and heavy trailer pulling and is equipped with a specially reinforced undercarriage and with dual transfer cases delivering dedicated drive power to each axle.

Operating in a remote boreal forest area seven hours north of Quebec City, Gauthier was careful to look into SENNEBOGEN’s service support as well as the capabilities of the equipment. He was pleased to find that SENNEBOGEN’s Quebec distributor, Hydromec Inc., maintains a branch in the nearby town of Dolbeau. “Hydromec is a new supplier for me,” Gauthier admits. “We haven’t done business with them often, but so far, everything is going well – it’s good. We learned how to work together. Before I bought the equipment I made some inquiries with others who have done business with them previously. You can’t have a shop like that without giving good service. You can tell.”

From June to early Spring each year, Services Forestiers R.G.T. runs its loading operations about 100 hours per week. Serviceability was a key factor when the camp’s management team, including Stecy Gagné and Donald Fournier, was comparing machines. “We’ve found that the components are well placed and it’s easy to access them,” says Gauthier. “For me, the biggest point was the fact that there are no electronic components on the machine. SENNEBOGEN uses hydraulics that I think any mechanic would be able to handle. We know how to work on this machine to keep it running and considering where we are located, this is critical.”

The group is also reassured by the ready availability of off-the-shelf parts for the engine and hydraulics. Hydromec stocks a large parts inventory in its own shops, but SENNEBOGEN makes extensive use of standard components that are offered by most service suppliers.

On the job, the 830 M-T has been proving that it can carry its weight in a demanding camp application. “We had tested it for a good 40 hours over a week before we purchased and I think it’s a good machine,” says Gauthier. “The results have been good: the fuel economy, its stability on the rubber tires. It will do 2,500 to 3,000 hours per year, running on 12-hour shifts. Its lifting ability is excellent; you don’t feel the weight of the wood. The capacity is good and the pulling power is very strong. I see lots of opportunity for it in trailer-pulling service. All of that went into our decision to buy the 830 M-T. And so far, if we needed another machine, it would be ‘yes’ to another SENNEBOGEN.”