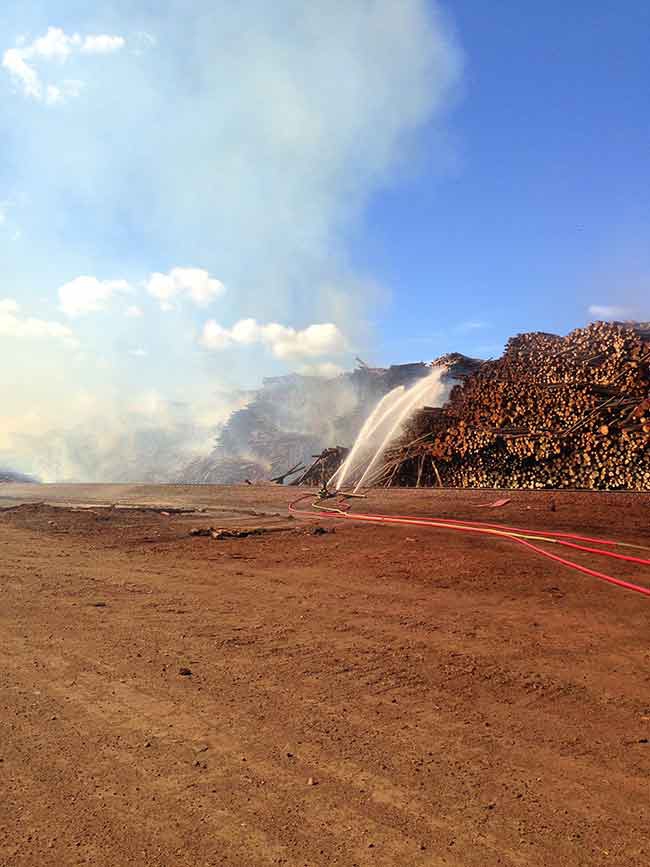 Firefighters from departments across northern Alberta went to High Level to help battle a fire at the Norbord oriented strand board mill in May. Photos courtesy High Level Fire Department Rodney Schmidt is the fire chief in High Level

At 2:15 p.m. on May 4, the High Level Fire Department received a call for an outdoor fire at Norbord, approximately five kilometres south of town. One of the largest plants in North America, Norbord’s High Level operation produces approximately 860 million square feet of OSB annually. The building alone covers almost 16 acres: the south-end roof is more than 30 metres (100 feet) high; the log yard is almost 1.6 kilometres (one mile) long.

The initial dispatch stated that the fire was in a wood-waste pile. On arrival, Deputy Chief Colin Buchan saw a fire isolated to the south side hog pile. The wind, being light from the southwest, was spreading the fire toward the plant.

The initial action plan was to attack the fire head on, but the wind changed direction and increased. Moving from full visibility to zero visibility, crews backed out of the area, abandoning hoses in place and moving trucks to a safe area.

Reports began coming in that the wind had pushed fire into the mill, and that fires were burning inside the plant. Inside, Norbord’s emergency response team members began battling fire in the wood room and the dry bins (seven storeys in the air.) Deputy Chief Buchan called an all call for all members, and I was notified of a major incident.

At 3 p.m., I was teaching at a conference in Peace River, 300 kilometres south of High Level, and received a text from officers in High Level about the fire – the log yard was fully involved and there were fires in the plant; all High Level apparatuses were on scene with all available members. Alberta Agriculture and Forestry – Wildfire Management was on scene with air tankers and helicopters and they were trying to contain the fires in the plant. Buchan requested whatever resources I could muster. I called dispatch and asked for all available mutual aid from our closest neighbours.

Arrival at the scene
I arrived at the scene at 5:35 p.m. and saw what I thought to be our worst-case scenario: our aerial truck was flowing into the mill dry bins on the seventh floor; and the log yard was fully involved, with air tankers doing retardant drops and helicopters trying to keep it within the plant site. I arrived at the command post and met with the deputy chief. Buchan’s report was simple: the crew had to abandon the log-yard fire fight due to limited resources. The log yard was being dealt with by tankers and the structural resources were concentrating on stopping fire in the mill.

A considerable portion of the log yard, including the large portal cranes, had not yet been affected and this was where we were going to make our stand.

Battle for the log yard
I had studied log-yard fires, and with two of the largest log yards in Canada in our response area, it is paramount that we know how log yards burn and how to fight them. The key is to get ahead of the fire and protect what you have left. The worst plan is to be a moth to a flame and fight the fire, at least initially.

That is exactly the plan we laid out – a flanking position on two sides: protect the mill and at all cost; protect the two cranes that feed the plant. If the cranes collapse, the mill is down for months and the community would experience a massive financial impact.

This was a big-water exercise, the likes of which our department had never experienced. Initially, a High Level aerial was put into place on the log yard west division to protect the log pile closest to the cranes; this was a tall order, as the log piles are more than 18 metres (60 feet) high and very wide. The High Level aerial extended its boom and began flowing onto the log pile, along with two ground master streams. This truck, and the others, would not shut down until sometime Saturday.

Next into position was the Manning engine, also going in the log yard west. The Manning engine flowed water to the south of the pile directly against the fire edge to slow the advance of the fire.

In log yard east, two La Crete engines were put into place across the pile from log yard west division to protect the cranes and work to stop fire spread to the main pile. The challenge on the east side was water supply: there was a deep water source along the length of the east log yard road, but no hydrants. A system was put into place supplying one engine with two, four-inch portable trash pumps. The second engine was supplied by tenders. By the end of the week, seven fire tenders were being used continuously to supply water to the engines fighting the log-yard fire.

A wildland engine and a High Level engine positioned at log yard south to begin trying to flow water onto the burning pile, and to save a small section of logs in the south. This operation was abandoned during the night due to resources and the little effect it had on the overall success of the operation.

The plant-protection division was charged with ensuring all fires were out inside the building and creating a standby crew for the plant emergency team. This crew used equipment from High Level’s third engine, and stayed in place until Thursday afternoon when a loss stop was declared in the plant.

Water supply crucial
The Norbord OSB plant is protected by a five-million gallon fire pond supplied by two fire pumps – one electric pump and a back-up diesel pump. During the course of the fire fight, both pumps were running at full capacity, supplying water to the engines and tenders. It quickly became apparent that the water supply would not last long. Enter the Norbord team: its members were tasked with keeping the fire pond full.

That task involved many facets: first, pumps were set up to move water from other retention ponds to the main pond. An agricultural pump was used to move water through six-inch aluminum pipe. This worked until the pond from which it was pulling water from ran dry. A fleet of more than 20 commercial water trucks sucked water from every slough, dugout and creek they could find to transport it and dump it into the fire pond.

A Cat was brought in to blaze a trail through some forest to another slough, where more pumps were brought in to transfer water. By Friday, the water trucks slowly began to gain on the pond, out-pacing fire crews in water use. Without these water-truck crews, the fight to save the mill would have been lost for sure.

Firefighters from departments across northern Alberta went to High Level to help battle a fire at the Norbord oriented strand board mill in May. Photos courtesy High Level Fire Department

Under control
By Friday afternoon things were starting to look up. On Thursday, all issues inside the plant had been taken care of, and standby crews were taken off line to join the log-yard fight. There were also some surprises Friday that caused an increased response. The County of Grande Prairie engine had been kept in reserve was pressed into service due to a flare up in some previously unaffected logs. This fire grew rapidly. Resources were requested from Fort Vermilion and Slave Lake, and arrived later that afternoon.

By Saturday afternoon the blaze had subsided to the point at which an under control could be called. No further fire spread was anticipated. A meeting with Norbord staff was held to discuss turnover the next day. By this time, a private fire contractor had arrived to assist with water supply to the fire pond; the mill had contracted the company to bring an engine to the site for standby and fire patrol.

By Sunday afternoon, a turnover was made to mill staff.

Relationships key
While this incident tested everyone over the course of five days, the response was deemed a huge success. The plant was reopened within two weeks; almost 50 per cent of the log yard was saved, giving the plant enough material to keep running while more wood supply was accessed. Hundreds of jobs were saved.

None of this could have been accomplished without relationships. Norbord has been an avid supporter of the HLFD and regular visits and meetings are held with the company in relation to fire protection. The knowledge the HLFD crews have with the plant is second nature, which made a huge difference to the outcome of the incident: because we knew each other, we could have real conversations about expectations, outcomes and eventualities of this
large incident.

Another relationship that was key to success is that with Alberta Wildfire Management: the bond is deep and personnel were instantly on board, assisting with air support, unified command on the first day, and providing resources. Keep in mind that this incident began during the largest urban interface fire in Alberta – Fort McMurray
was burning.

Finally, the relationship among fire departments in Northwest Alberta is second to none. Without hesitation, 13 fire departments came together with 75 firefighters to accomplish what seemed an impossible task.