Aug. 8, 2017 - With 15 years of experience under his belt as an excavator operator working to build forest roads, Michael Lavoie was ready to be his own boss in 2012. But where would he find the $400,000 needed to buy two excavators to start his own road-building business? The 38-year-old knew he would be hard-pressed to count on banks, which can be somewhat reluctant when you start talking about forestry. 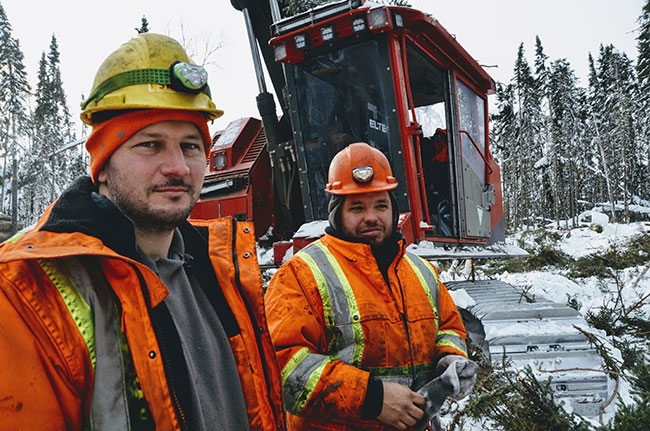 Benoit Gallant and Michael Lavoie make a formidable team by combining their knowledge on logging and forest road construction.

A solution came about during a conversation with Éric Bernier, who at the time was a territory manager in the Mauricie region for Rébec, a subsidiary of Groupe Rémabec. “When you have good workers and you believe in them, you’re always looking for the best ways to help them,” Bernier says. “We knew that Michael was an excellent operator and would be a very good contractor. That’s why we offered to lease some excavators to him for his first year of operation.”

And after just one year of leasing the equipment, Lavoie showed a healthy profit margin and was ready to strike out on his own. He purchased the two Komatsu excavators from Rébec and continued to work for the company as a subcontractor.

“Without the help of Rémabec, I wouldn’t be here,” Lavoie says. “They trusted me, and even if we didn’t sign a contract, they kept their word.”

In the following two years, operations were going well, but the work was not optimized. “It didn’t work so well with some forest contractors who were logging before us and I realized we could be more productive together if I had my own harvesting equipment,” Lavoie says. His only problem was that he had no experience with harvesting machines.

As Lavoie sought a reliable and professional partner, he met Benoit Gallant, a highly skilled mechanic who worked for Hydromec, an equipment supplier based in the Lac-Saint-Jean region. Lavoie floated the idea of Gallant joining him as a partner to round out his team.

Gallant did not give Lavoie an answer straight away. It was a big decision. Becoming his own boss was something Gallant had mulled over for several years, and a few months later, he finally picked up the phone and called Lavoie to discuss the proposal more seriously. “I was ready to look after my own machines,” Gallant says.

Gallant and Lavoie then prepared their business plan with the help of Rébec, which supported them in their project. “We had long wanted to encourage the development of teams that would log and build roads at the same time,” Bernier says. “We took the time to examine the human capital with the guys, because everything else is just metal. Right away we saw they were serious.”

Benoit Gallant and Michael Lavoie make a formidable team by combining their knowledge on logging and forest road construction.

The gamble pays off
In the spring of 2016, the two entrepreneurs launched their company – Forestiers MLBG –and then acquired an Eltec 310-Series feller-buncher with a Ponsse H7 harvester head and an Elephant King forwarder.

“By myself, I would never have made this investment, because it’s not my trade. It was a huge gamble and I had to mortgage everything to make these purchases,” Lavoie says.

But the gamble paid off because by combining the road construction teams with the logging team, they created tremendous operational synergy. For example, the company bought a four-wheel ATV and a 450-litre tank to distribute fuel to all machines. A great deal of time is therefore saved since the harvesters are far away from the service truck when roads are built.

Their forwarder can also be used to transport culverts during its downtime instead of just waiting around to haul wood. The partners also bought an army truck to store more material and pull the service truck if the terrain gets rough.

The team also saves on transport time since one pick-up truck is enough to transport all employees required to operate the five machines. “We’ve made all sorts of efficiency gains and everything is easier today. If I have problems, it’s because of me,” Lavoie says.

“Our greatest strength is that we complement each other,” Gallant says, who smiled as he got out of the Eltec harvester, which was in the McCarthy sector some 30 kilometres south of Parent.

After tweaking a few things during the year, the heavy-duty feller buncher is now operating at full capacity and Forestiers MLBG harvest between 1,700 and 1,800 cubic metres of wood every week. It is a highly satisfactory performance for the entrepreneurs who had initially set an objective of 1,300 cubic metres a week in their business plan. With a 1,600-litre tank, you only need to fuel up once a week, which is another advantage when building roads. The 10-member team builds on average one kilometre of forest roads per day in winter.

The model is so efficient and successful that Rébec would like to replicate this work model in one of its subsidiaries in Port-Cartier, while encouraging subcontractors to do the same. “Operations are easier and faster when doing business with a single company that manages both logging operations and roads,” says Bernier, who is now assistant to the vice-president of forest operations at Groupe Rémabec.

In the past year, Lavoie has also purchased a third excavator, a Komatsu PC360, which helps meet Rébec’s needs at various worksites. The acquisition completes the company’s fleet which includes a Komatsu PC290, a Komatsu PC270 and a Caterpillar D5.

To meet their labour needs, the business owners don’t hesitate to recruit people fresh out of college. “It allows us to train our own workers and take advantage of programs that provide grants for young graduates,” Lavoie says. He also hires seasoned operators who have retired, such as his father, but who can lend a helping hand when necessary.

After only a few years as a contractor, Lavoie has successfully surrounded himself with the right people and equipment to build a solid business.