Features Harvesting Logging Profiles
Logger pride: BC contractor shares a love of logging with the community 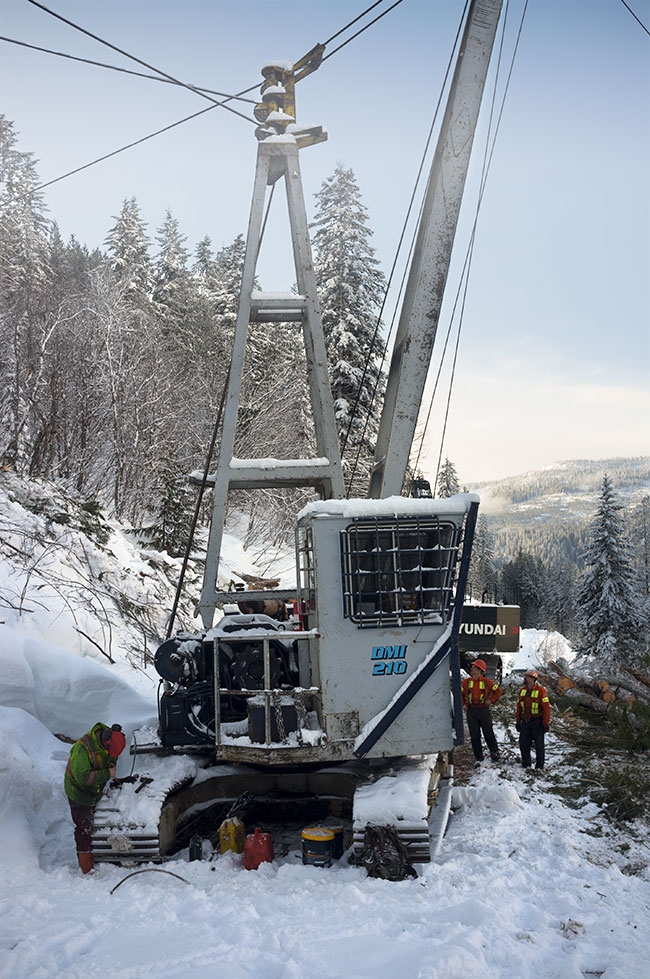 When Al and Erin Fitchett look out their picture window, across the west arm of Kootenay Lake near Nelson, B.C., they see the steep forests of the Selkirk Mountains stretching off in the distance. They also see scattered traces of the loggers who came before them, men and women who made their living sustainably harvesting the mature fir, hemlock and cedar for the local sawmills.

Those mills helped the nearby communities thrive and expand and were not seen as eyesores and polluters but rather as necessary employers that supported many families. The loggers of yore were proud of what they did for a living. They were highly skilled, did a dangerous job and the towns-folk understood and welcomed them with open arms.

But 30 or 40 years ago, public perception began to shift. Suddenly anything that affected the pristine beauty of an untouched forest was bad, even tragic. Many people back then didn’t look across at a harvested forest and see healthy regrowth and renewed diversity, all they saw was stumps and razed ground. There was even a mainstream feature cartoon movie at the time that portrayed loggers as the minions of the underworld leading to many uncomfortable conversations between people who made their living from the forests and their children. Some politicians bent to the will of their more noisome constituents and sacrificed the living-wage jobs that were the life-blood of small rural communities and mills began to disappear. Loggers began to guard their privacy from the ravages of public opinion and in some cases, were even reluctant to discuss what they did for a living.

Since then the situation between forest workers and the public has changed considerably. People now see wood products as a positive alternative to other less environment-friendly building materials and for the most part they understand the temporary nature of a clear cut. As prominent loggers in their community for the past 20 years, Al and Erin feel they are helping to restore the confidence and pride of being a logger.

Company roots
In 1998 Al bought a used CAT D4 Hi-drive crawler with a winch on the back and founded A.F. Timber Co. He hired a co-worker and together they would fall trees in the morning skid them out in the afternoon. They secured work logging private land and were soon off and running, supplying timber to the local West Kootenay mills. They did that for two years, picking up used equipment when they needed it until one day, Al took the plunge and bought a Thunderbird TMY40 yarder to take advantage of the abundance of steeply forested slopes in the local mountains.

The next two years were a serious challenge for Al and his family. Al had never yarded before and the learning curve was as steep as the hills he struggled to log. At times they were so discouraged all they thought about was getting the yarder paid off so they could go back to conventional logging. The long hours logging were topped off by even longer hours maintaining the machinery; the money wasn’t exactly rolling in. However, Al is not the type to quit something just because it is difficult. He was lucky to have a relative familiar with the process who he could discuss his problems with, and so gradually, without his even being sure when it happened, Al and his crew became good at it. In fact, they became very good at it and all thoughts of abandoning the yarder were gone.

That was the turning point in Al and Erin’s logging career. Erin recalls asking Al at the time, “How did we do this? How did we make this work?” But Al never had a doubt. Like many men who work in the bush, for him a challenge encountered is a challenge accepted. Al’s drive to succeed against all odds was to come in handy in late 2007 as the forest industry downturn seized the mills and the contracts for logs dried up.

Luckily for A.F. Timber, they happened to be at a stage in their equipment cycle where almost everything was paid for, so they weren’t forced into insolvency. Al was compelled to lay off his crew and trim down to one machine doing road building and small logging jobs for the next 18 months to support his family. In 2009 the industry strengthened, and the fledging yarder crew was back in business.

For the next five years Al worked with Porcupine Wood Products in Salmo, B.C., bidding on timber sales and delivering the logs to the mill. Business was steady, and the company grew. Al started another round of equipment purchases and it soon became apparent that he was going to need a good foreman to help with the growing workload. As luck would have it, Al did not have to look far for the right man. An employee he had originally hired as a handfaller displayed strong leadership qualities from the start. Jake Velisek was popular with the crew, knew a lot about yarding operations and was a natural choice to help lead the team.

Proud loggers
When it comes to hiring new employees, A.F. Timber doesn’t exclusively look for experience. They look for eager, passionate, fit young applicants willing to work hard to learn every facet of the job from the bottom to the top. Everybody on the team helps mentor the new hires and employees are encouraged to take ownership of their responsibilities. Nobody is left to try and figure things out on their own; in many ways the workers are as tight as a family.

That’s part of what logger pride is all about: it is a system of values taught by doing a dangerous job to a high degree of skill while being part of a smoothly functioning team in mostly adverse conditions. It’s being proud of what you do and looking back at the end of the day knowing that you have achieved what most people could not achieve and then taking that feeling of accomplishment back home to your families and your communities.

In 2014 Al bought a larger yarder to fulfill the growing company’s needs and the company began to log exclusively for Kalesnikoff Lumber in Thrums, B.C., bringing in mostly large fir, cedar, hemlock and larch. They purchased a new Peterbilt Tridem logging truck and ramped up production to 250 cubic metres a day. Although Erin had always worked part time in the office, in 2015, it became clear that the company was going to need somebody to perform administrative duties full time. Erin was happy to step into that roll and as part of her new position she decided to reach out to the public to help them remember that loggers are valued members of our society and that the task they perform is necessary and honorable. The Logger Pride movement was born.

Erin began working with social media to spread her message. Her core belief is that if you don’t tell your story somebody else will. She contacted the B.C. environment ministry and was invited to participate in school presentations as well as to set up a booth at local forestry day events. To date she has spoken to more than 1,000 children about steep slope logging and how the logs get from the stump to the mill as well as explaining how logging is sustainable and beneficial to our future.

The Fitchetts have also been working with Selkirk College developing a logging training program and exploring the possibility of making logging a Red Seal trade. A.F. Timber sponsors a $1,500 bursary for young people entering the forest industry after post-secondary education and in fact, the first recipient of that fund has even helped with the planning and layout of one of their cut-blocks!

In 2016 A.F. Timber bought a Hyundai 3030LL log loader with a SouthStar grapple processor, one of the first in the B.C. Interior, which made the operation more efficient by allowing them to process and load with one machine. The contractor currently employs a team of five and one contract faller. Their expanding equipment inventory now includes in addition to the previously mentioned machinery; a Diamond 210 swing yarder, a Cat 535C skidder, a Hyundai 250LC-7 log loader, a Hyundai 250LC-7 hoe chucker and a John Deere 2654 hoe chucker.

The future looks bright for A.F. Timber and for Logger Pride in general. Erin plans to continue her outreach and education program in the local schools and at community events while Al continues to perfect his steep-slope logging methods while keeping an eye on new technology such as tethered mechanical falling. Al and Erin Fitchett can be found with their two children just outside of Balfour, B.C., surrounded by the forest they live, play and work in.