Dec. 4, 2017 - Working for the LeBeau brothers logging operations in Kamloops, B.C., is like joining a fraternity. 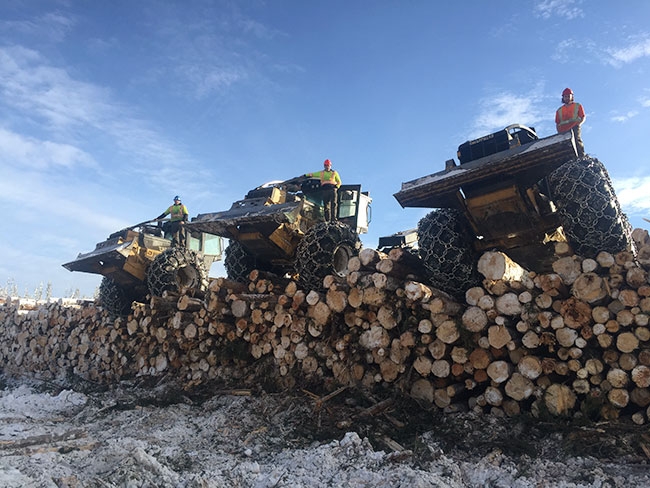 I met Brent LeBeau first. Brent runs one of two companies under the LeBeau name: LeBeau Forestry. Next I met Jason, who is machine operator and long-time employee of Brent’s. And then I met Craig, the oldest of the brothers, who runs LeBeau Bros Logging.

“You don’t want to get us all together in one room,” Brent jokes with a laugh.

The companies’ official birthdays are in the 90s but as Brent explains, logging began in the family much earlier than that.

“LeBeau Brothers Logging was my grandfather’s company which dates back to the 50s. He came up from Vancouver and was hauling logs and loading for Federated Co-op at the time,” he says.

After the LeBeau’s grandfather passed away in the 80s the company disappeared for a time. “Our parents did everything they could to keep us out of the bush. They didn’t want us to have anything to do with it. But my brothers and I went back in the bush in 1990,” Brent says. Since then, Craig and Brent have each launched a successful timber harvesting and hauling company in the Kamloops area.

The difference between the two logging companies is mostly in name. “We’re separate identities but we work together. We share workers, trucks, equipment, contracts; the only difference is the word ‘Forestry’ or ‘Logging’ on the decal,” Brent says.

As Craig puts it, there were challenges over the years as with any group of brothers, but they would never let each other fail. “We are separate, but there are lots of people who think we are all one group and that’s fine. At the end of the day, if he got into some trouble or I did, we’d be there for each other in a heartbeat,” he says.

The fraternity is not only for men. Craig’s wife Tracy LeBeau and Brent’s wife Andrea LeBeau are a big part of the businesses too. “It’s a family business. They’re in the office with us. Sometimes it is difficult because you get a lot of stress in this business, often financial stress, and that has an impact on your relationship. So you learn to manage that,” Brent says. Both women are from logging families so they’re no strangers to hard work in the bush.

Reviving the business
Brent and Jason together bought their first forestry machine in 1993, a Clark skidder. Craig followed suit soon after, purchasing a Timberjack 450 skidder.

“We didn’t start from much. Our grandfather did start the name, but we didn’t have anything to begin with,” Jason says.

Today the two companies combined employ about 60 people, many of whom are in the LeBeau family or extended family.

“We log anything from 0.1 piece size pine, short logs, to seven-foot diameter cedar trees up in Mica Creek. We handle anything from flat ground to steep slopes. We put trails in and hand fall, hoe chuck and hand buck. All types of jobs without yarding and no cable assist,” Brent explains.

Many of the LeBeau Forestry’s contracts around Kamloops are for private landowners such as ranches. Brent works with a local brokering outfit called Westwood Fibre, which manages the local contracts. He also has a contract in Salmon Arm area for Stella-Jones.

Another side of Brent’s business is a contract with Sun Peaks Resort. “We’re up there logging on the snow pack. A lot of that is pulp wood. Typically the harvesting up there is removing the dead trees or putting in new ski runs,” Brent says. “In the last four years we’ve completed four runs. It’s interesting work.”

LeBeau Bros Logging has long-term contracts with the Kamloops Indian Band and with Tolko on cuts in Kamloops and in the Lavington area, and also has smaller contracts with Stella Jones, Interfor and Downie Timber.

“In the last couple year’s we’ve been through old blocks that my grandpa was a part of loading and hauling – Lee Creek, Seymour Arm, Scotch Creek. It’s pretty neat to haul where grandpa was years and years ago,” Craig says.

The companies log as far away as Mica Creek, a 350-kilometre drive northeast of Kamloops. “We’re on two-trip a day cycles and sometimes we’re down to one and sometimes we’re up to four. It just depends on the location,” Brent says. “We pretty much go 12 months a year. For Craig and I, we work with so many different companies and we share our workload so we can get the early starting ground. We have that flexibility.”

The number of contracts also means the LeBeau brothers have to be versatile in their operations. Some of their contracts are cut-to-length and some are long logs. “You have to be able to switch back and forth,” Brent says.

LeBeau Forestry, the smaller of the two companies, is aiming for 120,000 cubic metres this year while LeBeau Brothers Logging is expecting to bring in about 400,000.

Filial fleet
When asked about their fleet, Brent says, “We’re going to sound like an advertisement for Caterpillar. We hardly have a piece of equipment that’s not CAT.”

The equipment list is rounded out with a grader, rock truck, road builder, wheel loader, packer and dozers, all Caterpillar. For attachments the two outfits both use a mix of Waratah, IMAC and Weldco-Beales.

“We both just bought new CAT 555D grapple skidders,” Brent says. The 555D model has the 360-degree continuous rotation grapple with box-section construction and threaded grapple tong pins to maximize structural integrity. The 21.5-tonne machine is the largest skidder model for CAT with a grapple capacity of 22 square feet.

“I wanted to go bigger because of the timber type we’re in in Salmon Arm. It’s tougher ground, in green, heavy wood and you need a big machine,” Brent says. “I got the 180-seat so you can turn your seat around and drive backwards. It’s great for the operator as far as fatigue goes. It was an option but I’ll pay that back in what I gain in lower operator fatigue and in productivity.”

The sleek new machine is painted all black with the LeBeau Forestry logging decal.

Future direction
Business is not without its challenges. As with most B.C. loggers, they are facing shrinking fibre supply with reductions to the province’s allowable annual cut. And this summer they were up against B.C.’s record-setting wildfires. But business remains strong for the LeBeau Bros and that is due to the company’s versatility.

“It all depends on your mind set,” Brent says. “If you’ve got your mind set on just conventional logging, road-size clear cut on the Kamloops area and that’s all you know how to do, you’re probably going to be looking for a new job. The easy wood is gone. You have to diversify to different types of harvesting and systems.

“It’s hard work but at the end of the day it’s rewarding,” he says.

10 Comments » for The three musketeers of logging: meet the LeBeau Brothers