Feb. 18, 2015 - Shortly after Brian Frank launched the debate about log blocking, Canadian Forest Industries took a trip to Vancouver Island to see how one of the largest Canadian log exporters is handling the export restrictions. Island Timberlands exports its logs with the majority going to Asia. CFI was curious to see how the company is able to reconcile costs if the export rules are written to restrict logs from leaving Canada.

Island Timberlands has 256,000 hectares of forestland divided into four geographic zones. Canadian Forest Industries visited the zone in the Northwest Bay operation not far from Nanaimo.

In early May, the crew was processing second growth trees in a region comprised of 80 per cent Douglas fir and 20 per cent hemlock and cedar on the low elevation of the region. Snow was only starting to melt at higher elevations, but the crew expected to move into the mountains later that month or in early June.

In the low-elevation second-growth forest, the Douglas fir was around 60 years old. “What’s unique about Vancouver Island compared to Washington, is because the soil here is draining well, the trees are growing more slowly,” director of marketing and distribution for Island Timberlands, Alain Deggan, says. “They’re a bit more stressed and so they’re growing up faster than they’re growing out. As a result, the grain is tighter. Down in Washington, they’re harvesting 30-40 year-old trees that are bigger in diameter than our 60 year-old trees,” he says.

Vancouver Island Douglas fir second growth forests don’t produce as much yield per hectar on an annual basis as the forests in Washington State. But the timber is of a higher quality; it makes excellent peeler logs for the Japanese market because there are fewer knots and finer grain making ideal face and back qualities in the finished panels.

The forest on the Northwest Bay side of the island benefited from a clearcut that was done in the 1950s. The species traditionally regenerates after huge forest fires that would clear swaths of forests of competing species while dropping seeds that would eventually start to grow. Douglas fir and alder would grow from the cleared site – alder fixing nitrogen into the soil and then dying off 50 years later- leaving the fir with the freedom to grow without competition.

But, Island Timberlands will generally replant after harvesting, in order to give the forest a speedier recovery. Deggan recalls the call of the west coast that lures adventure-seekers from all walks of life to take on the elements while planting trees. He succumbed to the call himself in his younger years.

“It was great because you could go planting before you went logging in the spring.  In tree planting camps, you’ve got a diverse group of people from different walks of life coming together for seasonal work. So when you were out in a remote location, it was just great being in that community,” Deggan says.

But for many of the people who yield a pioneering spirit, the reality of life in the mountains, and the insects, kill the romance. “It’s a bit of a rough job,” Deggan admits. Safer than logging, but still hard work. Tree planters often get paid by the tree and those who are highly proficient do a good job and leave with good money. As a result of their hard work, the forest grows back more quickly.

Harvesting the value
At the jobsite, a Cat log loader is hoe-chucking full-length logs to the roadside where a processer sorts the pile. The falling was done by a contractor who works with a Tigercat in low elevations with less than a 40 per cent slope. But in the mountains, the company uses overhead cable systems.

“In our older timber, it’s definitely a lot of hand falling still just like the old days. And still a lot of cable yarding,” Deggan says. “Grapple yarding is predominately what we use these days because it’s the only way to access timber on a steep hillside other than using a helicopter, and it’s a bit expensive.”

Once the logs are piled near the roadside, a machine operator in a Cat D228 with a Waratah head, picks up the logs one-by-one, determining the best cuts to make based on a sheet of log values. Judging the potential value that can be extracted in each log, the operator will check for bumps or grooves that will make the section unfit as a peeler log.

“Often the butt cut is the premium log because there’s obviously less branches near the base and as you get higher it gets more knotted so he’s making that the secondary log,” Deggan explains, as the operator sorts through logs that are 30 cm and bigger. The most high-valued log for Island Timberlands in the second-growth is a Douglas fir log and it would be cut to one of three lengths for the end-user in Japan. Once the premium log has been cut to size, the rest of the log will be cut to 12 metres for the Chinese or the U.S. market.

Logs are then loaded onto a truck and sent to port. The company’s biggest export customer is Japan - a country whose people do most of their own shipping - so the logs are primarily sold FOB. Logs bound for China or Korea are chartered by Island Timberlands and the ones bound for the U.S. are towed to the border. Canadian sales are delivered to the mills or by FOB on the Fraser River.

A Western Red Cedar gang log between eight to 12 inches would fetch around $160/m3 domestically and on the international market. A Douglas fir log destined for the Japanese peeler market would be worth about $140/m3. The lowest valued log on the international market would be one bound for China and would have a $85/m3 price tag. Domestically, however, these logs would be priced between $60 and $90/m3. Typically this represents a +$30m3 spread between domestic and International prices.

“When we lose sight and we don’t put a value against the asset, you get unintended consequences. The cost of coastal harvesting in British Columbia is high and margins tight,” Deggan says. “Without access to international markets much of the timber is uneconomical. This is reflected in low stumpage paid to the government for Crown timber, which represents the bulk of the coastal harvest.”

“The cost of administration may be higher than the revenue generated in a given year. While there are social benefits to be gained, the distortion from low cost timber and not getting all the value erodes much or all of those gains,” Deggan says, turning to a pile of premium logs. “And is there a more beautiful product in the world?”

Making it work
For Deggan, the way to extract the most value from a stand of trees is through measured processes. Before an area is harvested, a quality control supervisor goes in to “put a prescription on that area” with a value matrix that determines the most valuable potential products in the stand.

“Make as much of that as possible and then cascade all the way down sending it to the relative customers. So from a value perspective, I think we do a good job of targeting the best potential market at any given time,” Deggan says.

Island Timberlands has an extensive market network, providing it some flexibility to manoeuvre as demand changes. “We’ll shift back and forth depending on market demand, currency, distribution costs and such,” Deggan says. “So it’s about the process: we’re trying to keep our costs as low as possible and get as much value as possible. It’s really a tree to a customer approach.”

And yet, if there’s one thing that gives Island Timberlands an advantage over other coastal logging companies, it’s the company’s dry land dock – the only land loading facility of its kind in B.C. Logs go into the port by truck or barge, get decked, piled, dewatered (if it came by barge) and then advertised for a month. Over this month, domestic mills have the opportunity to block the export so that the logs must remain availabe to the local market. If it does not get blocked by a domestic mill, it is put on a ship bound (most likely) for Asia.

“Not only is it cheaper to load logs from land than from water but also you get more on your ship,” Deggan explains, “because you can handle the wood in more accurate ways, more length sorts, really stow that ship properly.”

Deggan also points out the benefit of keeping moisture content low. “You put wood in the water and it gets heavy. Sometimes, you’ve got as much as a 20 per cent spread in the weight of wood,” he says.

Crew members measure the logs, trim them and operate a debarker that runs two shifts a day to remove the bark from the logs. The debarked logs fetch a premium depending on the port - most logs bound for China require debarking.

The key to competing in any regulatory environment is to take any opportunity available to get more value for each log. Whether it’s finding the right market, keeping the freight costs low or debarking, Island Timberlands competes by unlocking the top value of a valuable commodity. 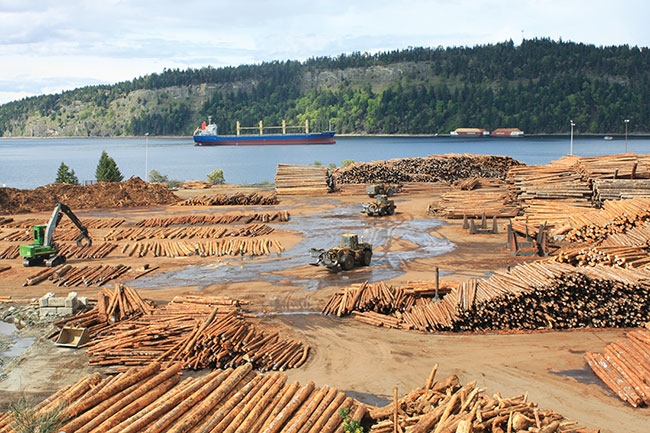