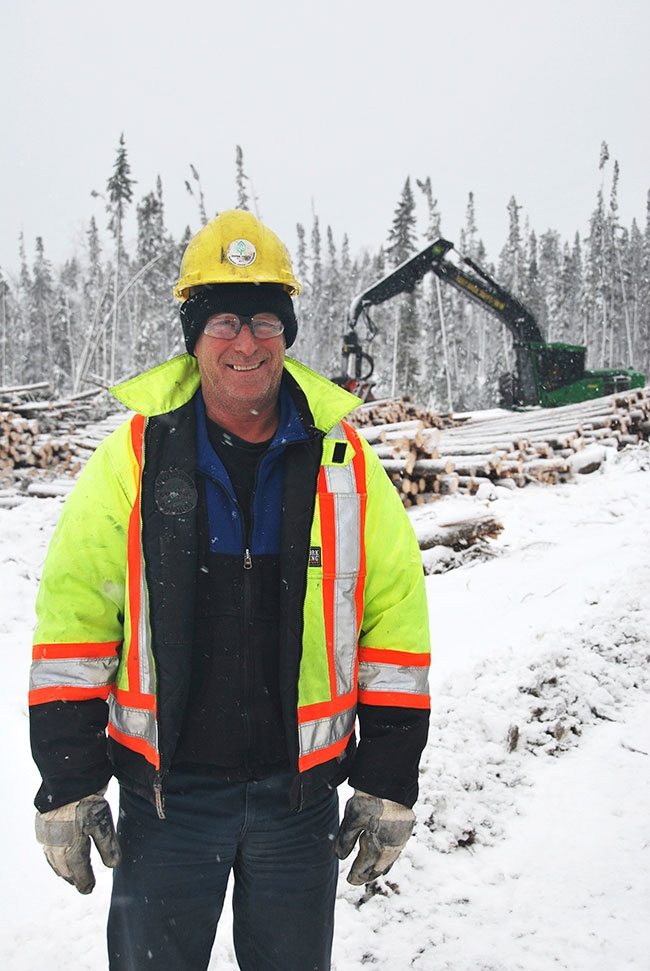 This is what Kim Ankney, a 58-year-old logging veteran, tells me on our 150-kilometre drive north of Ignace, Ont., to view his operations in early December.

Ankney is the owner of Highstone Logging, a company that has been harvesting in northwestern Ontario since the mid-90s when Ted Ankney, Kim’s father, started chopping down trees near his hometown of Sioux Lookout. Today, Highstone logging is one of the largest contractors for Resolute Forest Products’ operations in the area, supplying fibre to Ignace, Atikokan and Thunder Bay sawmills, as well as woodchips to Resolute’s pulp and paper mill in Thunder Bay.

Ankney is both a heavy equipment mechanic and a log scaler by trade. As a young man he forged his own path separate from his father’s company. But when his father became ill in 2002, Ankney dutifully returned to help run the company. A couple years later, Ted died and his son took over the business.

Ankney, it turns out, has a head for numbers and people. The company doubled in size after just a few years under new leadership, primarily supplying to a then Buchanan-owned sawmill as part of a wood-trade agreement with Resolute’s predecessor AbitibiBowater Inc.

At latest count, the logging company employs about 55 people, including 28 drivers, and harvests around 320-350,000 cubic metres a year. The company’s other client is a Weyerhaeuser laminated strand lumber mill in Kenora, Ont.

In late November, the bulk of Ankney’s crew was finishing up harvesting a section of Caribou Forest, one of Resolute’s four woodlands in northwestern Ontario, where Highstone had been operating for three months. About 300 kilometres away, other Highstone Logging staff were building roads for the next logging site.

Of Highstone’s annual harvest, 150-170,000 cubic metres is processed for sawlogs, the rest is chipped. The company is targeting 200,000 cubic metres of sawlogs next year. Resolute specifies a minimum top size of 10 centimetres or 3.81 inches. Highstone generally finds fibre with 12 to five-inch butt sizes.

“We fell and we sort species and size with the feller buncher, and the skidder accumulates to roadside, species and size specific. Processors work at roadside now merchandizing the full tree into various lengths.”

Spruce, jack pine and balsam head to Resolute’s three sawmills in nine, 10 and 16-foot lengths, and 104-inch poplar is hauled to Weyerhaeuser’s mill. Birch, tamarack and other undesirable logs are sent to the chipper. The company’s average summer skidding distance is 300 metres for sawlogs and 500 for the chipper, depending on ground conditions. That distance shrinks in the winter when it is cheaper to build roads.

Highstone’s operations are remote, with haul distances anywhere between 10 to 13 hours, 300-425 kilometres from the mills. “We don’t expect that to change, that’s our MO. We’ll be moving farther away as time goes on because that is where the wood is,” Ankney says.

Chipping away
When sawmills began closing in northwestern Ontario around 2006 to 2007, many logging operations disappeared. Ankney says it was his chipping operation that kept him alive.

“With the sawmills closing, that left a shortage of sawlog chips for the pulp and paper mills that were running, and it was at that time – late 2007 early 2008 – that we got involved in full-tree chipping,” Ankney says.

Highstone leased a Peterson 5000-G chipper in 2008. “Our chipping volumes took off in 2008, 2009 and 2010, and it’s really what saved this company from going out of business. It was then that we became an integrated operation capable of cut-to-length logging, full-tree logging and full-tree chipping all together. That’s really when it clued into me what a diversified company we had become.”

The small volumes requested by various mills in the area allowed the company to stay in operation, and its staff employed. “Even through the downturn, the nucleus of the employees here were never laid off for more than three weeks,” Ankney says.

Refreshing the fleet
Ankney’s operations are large enough that they need to constantly upgrade machinery as the hours stack up in order to avoid costly repairs or machine downtime. He aims to replace feller bunchers every 12,000 hours and processors every 20,000 hours.

“It’s a mobile operation so we’re not successful doing big repairs out here so they have to be taken in and that’s lost production time,” Ankney says. “We’re not in the equipment repair business.”

Highstone’s most recent purchase was a 2154 John Deere with a Waratah 622-B processing head bought in June last year, which complements two similar machines and attachments purchased in 2011 and 2014.

“We plan to invest in another new processor this winter, sometime in the next couple of months, and we plan on getting a new feller buncher for the spring. We’ll probably be looking at a new skidder then as well. It doesn’t stop,” Ankney says. “I think that the minute we try to stretch things out is the day our productivity
goes down.”

The company’s fleet makeup reflects a challenge with logging in northwestern Ontario: fibre is becoming harder and harder to access.

“Over the last few years we’ve had to use our logging profit money to accumulate more roadbuilding and road maintenance equipment. When you look at the fleet, we’ve become more of a logistic roadbuilding company than a logging company,” Ankney says. More than half his fleet is now roadbuilding or maintenance equipment, including three Champion 740 graders, two John Deere 290 and two Link-Belt 240 excavators, two float trucks and trailers, two CAT dozers for roadbuilding, as well as gravel trucks, rock trucks, and sand trucks.

In early December, heavy snow was falling but the ground was still unfrozen, so sand trucks and a grader were hard at work keeping the roads clear and sanded for the logging trucks to make the five-kilometre stretch into and out of the site.

At the next site the company will brush out and build 48-kilometres of road just to access wood for the winter.

including 28 drivers. The company is one of Resolute Forest Products largest contractors in the area

Seeking: competent people, will train
Gone are the days of waiting for trained operators to inquire after logging jobs, Ankney says. For the last few years, Highstone Loggings No. 1 worry has been finding competent operators who will stick around for the lifestyle.

“The local experienced labour market is tapped out, there isn’t anybody left,” Ankney says. “Everybody with experience that wants to work in this industry and is capable is working, so our strategy has changed. Now we are looking for employable, trainable people, not those with experience. But we seem to have a hard time even attracting trainable talent.”

The production equipment operators are scheduled between 50 and 55 hours a week in double shifts of 11 hours. The sites are often hundreds of kilometres apart, so employees must be willing to live away from home for weeks on end.

Transient workers are a poor option for the logging business. Prospective employees for Highstone must already live or commit to living in the area, Ankney says. Resolute helps the company out by posting job openings on its website and forwarding on potential employees.

One of Ankney’s newest hires, was operating a processor during our visit and we watched for a bit as he struggled with the large branches of a jack pine. Ankney was quick to radio the young man to shut down the machine, then he hopped out of the truck and hiked over the log pile to share some wisdom with his newest operator. Mentorship, it seems, is another key to Highstone’s retention strategy.

Preparing for change
When it comes to Highstone’s future, Ankney admits he doesn’t have much of a plan, and part of that is planned.

“There’s no 20-year strategic plan for us,” he says. “In the logging business, we’re better off putting our heads to making sure we are prepared for change.

“This company, myself and the people who help me run things, not one of us is a philosopher or rocket scientist. We learned our trades out here solving problems; it’s what we’re good at. I never planned to own all this logging equipment. But I’m proud of what we do, this company and our accomplishments,” he says.

Reflecting on his 40-year career, Ankney says he initially had no idea how much other work is involved in managing a logging operation besides just cutting wood. Yet today as an owner operator, despite all the other work on his plate, it’s the daily time spent in the bush that keeps him happy.

“If my work was behind a desk, I would have given it up years ago,” he says.