Features Harvesting Logging Profiles
Lone operator: One of the few subcontractors in Canada

June 9, 2017 - Donny Glover is a unique guy. It’s not just that he is one of a shrinking number of first-phase subcontractors in B.C., or Canada for that matter . . . there is something else about him that makes him unique. Maybe it’s his grit. 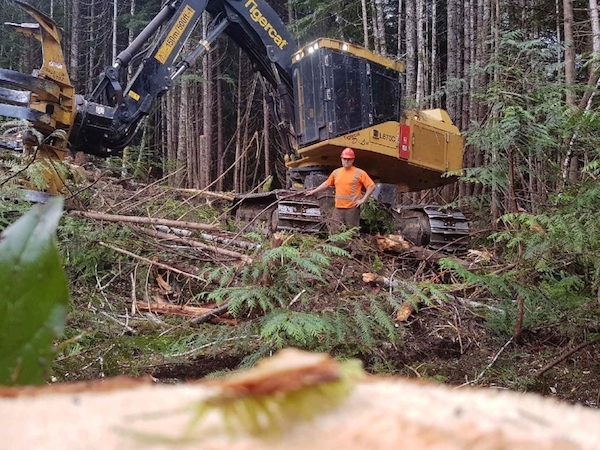 Donny Glover has worked as a subcontractor for more than 30 years in B.C. Donny Glover is a unique guy.

For more than 30 years, Glover has been a die-hard harvester for hire, answering only to himself and his machines under the company name D-Lin Investments Ltd. Beyond that, his resume includes cutting on some of the most challenging terrain in the country: coastal slopes.

Glover met up with me during one of his trips home to Agassiz, B.C., a 20-minute drive from Chilliwack. At the time he was working with Roga Contracting on a cut near Port Alberni on Vancouver Island.

Turning 50 this year, Glover has been in the logging business his whole life and he doesn’t plan on changing that. His partner, Christine Gray, is the other half of his business, taking care of the paperwork to make sure he’s properly compensated for his work.

“I do the bookkeeping, the safety, parts running . . . I’m his helper,” Christine says.

Glover started logging when he was 19 and began his own subcontracting company in 1989. Over the years he has ventured into processing from time to time, but for the past several years he has been a single-phase subcontractor.

Living and often working in the Harrison Valley, Glover is experienced with steep slope logging. Navigating the grades in his feller buncher is just a part of everyday life. That said, he knows steep slopes are dangerous, especially for green operators.

“Anybody can go work on a dirt hill, but go and work in rock bluffs and it’s much harder,” Glover says. “We have a lot of oversized wood to deal with so being able to fall on those ground conditions and not break the wood is what separates experienced operators from those who aren’t. In the end we have to give a good quality product for our employer. That’s all experience.”

Glover harvests conventionally on the challenging grades, opting not to use a tethering system. His years of experience with these techniques allow him to read the terrain so he can harvest efficiently where he knows it’s safe.

“Flat ground is boring for us when you’ve worked on steep ground all your life. We like to be challenged,” he says.

When it comes to safety, Roga’s procedures for its employees and subcontractors are exceptional, Glover says, and should be held as an example for other companies. “They are very thorough at making sure the operator is experienced enough to be on those hills.”

Another crucial skill that allows Glover to keep subcontracting is his ability to fix his own iron. “We have our own service truck, which seems crazy when we only have three machines and only run one, but that’s the biggest reason I’ve made it over the years. I’ve never had to hire people to fix my own.”

Glover grew up on a farm where his father taught him to operate the equipment. At six years old he was behind the wheel of his own CAT and learning how it runs.

Operators who want to be successful subcontractors today should have a mechanical background, Glover says. But that skill is disappearing, Christine adds.

“The bigger logging companies have their own mechanics on site so the operators they are training today don’t need to have a mechanical background,” she says.

The right machines
Having reliable and high-performing equipment is essential as a logger, and even more so as a subcontractor, Glover says. Part of that equation for him is having good working relationships with his dealers.

“I’m not your typical contractor, I get to know the dealers really well. They stop and visit all the time,” Glover says.

Last year he purchased a new Tigercat L870C tilter from Inland Group, bringing his fleet up to three Tigercat feller bunchers with his older model L870 and an L830.

“My opinion is it’s the best equipment in the industry for our application. It’s durable and holds its resale,” Glover says. “I always modify my bunchers, hydraulically or whatever, to what I need. They are tuned as good as they can be without voiding warranty.”

Glover prefers to buy used machines and rebuilding them to increase its performance.

“We’re really good at taking what people would call junk and rebuilding it to make it a usable machine,” he says.

Donny Glover has worked as a subcontractor for more than 30 years in B.C.

operating a feller buncher on some of the coast’s steepest logging slopes.

The right business model
When it comes to employees, Glover prefers to work on his own. “I run one machine and I make money, but I run two or three and I don’t. It cuts my margin down too narrow.”

Glover says it’s that shrinking margin that makes his kind a rarity. He knows of few subcontrators that have survived over the years. “Twenty years ago everyone wanted to own a buncher, it was good living. Over the years it’s been phased out and all the big players buy their own machines. They don’t sub out very often.”

Glover says it’s understandable why subcontractors are going the way of the dinosaur. Machines are increasingly more expensive and large outfitters can’t afford to recover if a subcontractor goes under and is unable to fulfill a job.

Glover bought his first brand-new buncher in 1993 and spent $400,000. Now, he says, that buncher costs $720,000 and dealers rarely rent them out. “It’s changed a lot. The price has skyrocketed but the amount we get paid has not changed since I started.”

His machines, however, are capable of much more volume than bunchers 20 years ago and since his pay is volume based, it’s still possible to compensate for low rates with high volume, Glover says.

It’s difficult to find out the number of subcontractors still operating in B.C.; Glover says he knows maybe a dozen. There is no denying it’s a tough gig.

“You have to be a diehard to be a subcontractor. It’s got to be in your blood. Some of the years I’ve been through . . . you’re crazy to stay in.”

Relationships built over 30 years in logging, Glover says, are what keep his business going. “If you’re going to survive on a small scale like I am, you always have to think about reputation and put your best foot forward.

“I’d say 90 per cent of the people I’ve worked with over the years have been really good quality and are still friends.” Those friends are quick to help out if he’s in need of any mechanical advice or if he’s looking for work.

“It’s hard for us, but if you have a good reputation, and you’re a big-volume cutter, the large contractors will add you into their system,” he says.