To give you an idea of how long Nova Scotia logger Terry Deal has been at it, his initial investment as a contractor wouldn’t even buy you a set of off-road tires today. 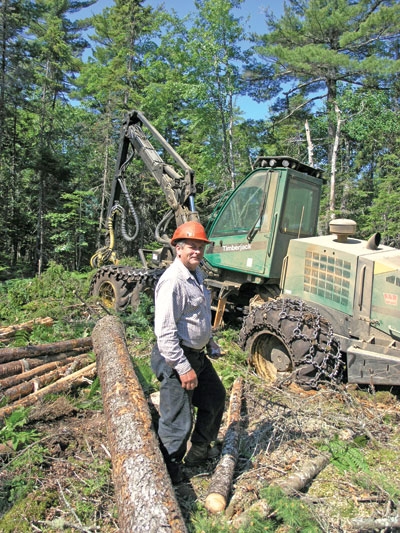 “I’d been working construction in the city (Halifax), and came back here to set up with my father in the mid ’70s,” the logging veteran recalls. “My father loaned me $10,000, and he put in $10,000 himself, and we got started. That wouldn’t get you too far today, but that’s all it took.”

“Back here” is a small village called New Germany, just north of Bridgewater, NS, a forestry community about 90 minutes southwest of Halifax. That early crew was a mix of manual powersaw cutters and small 4WD forwarders. Later they added a Timberjack 230 skidder, and then shortly after Terry’s father died, he added another skidder and a slasher. But the dramatic change happened in 1995, when the local pulp mill and sawmill owner, Bowater Mersey, asked area loggers to make the switch to full mechanical operations. The system of choice was, and still is, cut-to-length harvesters and forwarders. Some of the area contractors have since added bunchers to the mix for a three-phase CTL system, but Deal remains a CTL purist. “I could just never see how that third machine pays for itself in this wood.”

Instead, he runs a pair of John Deere 1270D rubber tire harvesters, and two John Deere 1710D 8WD 17-tonne forwarders – one added in 2006, the other an older spare with over 33,000 hours. Although often seen as a pure softwood system, this mix allows Deal to handle the full range of species, sizes and sorts his crew sees on a daily basis – hardwood (25%) as well as softwood; pulp as well as sawlogs, stud, peelers, and even incidental firewood.  While average tree size is on the wane, the area still boasts some beauties in both softwood and hardwood, for tree sizes that are all over the map. Terrain is for the most part broken and very rocky, hard on tires, tracks and operators.

The gear runs two 10-hour shifts daily, five days per week, and the crew does most of its own maintenance to get as close to those 100 scheduled hours as possible. For his part, Deal still finds the rubber tire, purpose-built CTL machines relatively complex after 13 years in the game.

“Most of my guys can do just about anything, and I’ll help, so the only time I’ll hire Wallace (the local John Deere dealer) is for some of the more technical stuff – the last time was to program a new module – or for really heavy work requiring a big crane. Otherwise I like my guys to do it, and that way I can keep them working too. They need a week’s pay, and if I can’t give it to them, someone else will,” he adds, citing another familiar refrain among operator-starved contractors. For the same reason, he likes dealers who’ll let his operators help out on repairs.

In fact, Deal credits his crew of top quality operators for much of his success. Markets are tough, he notes, and margins get thinner by the year, so there’s little room for inexperienced operators making costly mistakes or low production.

“I’ve been lucky that way – I’ve got a loyal crew,” he told CFI when we were on site last summer en route to a DEMO 2008 site selection meeting. “These guys have been with me 5, 10, 11 and 12 years – not a lot of turnover. That’s good, because it costs too much to start new operators, and today there’s no cushion for that. We’re productive, so we’re surviving. One step back, and forget it.”

In fact, that respect for operators is one of the main reasons Deal opted for, and sticks with, rubber tire gear. It’s a rough area he works, with broken ground and endless rock, so that bumping around it on tracks or smaller 4WD or 6WD forwarders would not serve his crews well. 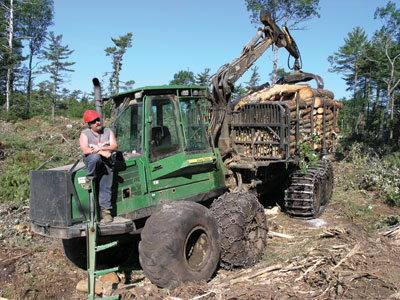 “Operators are a big thing in this business – don’t kid yourself. They’re more important than the machinery. The more uncomfortable you make them, the more you’ll be replacing them, and that’s expensive. It takes time to learn to run it, and then more to fix it, and they have to do both here.”

All told, the crew numbers eight, including Deal. Four run the harvesters, two the main forwarder, and then there is a power saw operator for the big-n-uglies. Some flexibility is built into the forwarding phase to account for longer hauls over rough ground. While AbitibiBowater tries to plan for a maximum 500-m forward as the crow flies, forwarders aren’t crows, and plans are, well, only plans.

“We’ve gone as far as a mile if it saves putting road into a corner block,” Deal says as we walk back well over 500 m to find today’s harvest site. “There’s a variable rate based on straight distances, but little is straight here, and you’ll never make money by going long. Still, that’s the way it is, so you’d best be set up for it. The big issue is balance. It can be working well together, and then a long haul and rough ground will put the forwarder way behind. Add some snow, and it’s a problem.”

And that’s where the old Deere 1710D forwarder comes in. With over 33,000 hours, its trade in value is negligible, but it is worth its weight in gold at times as a spare, allowing the harvesters to continue working full out without worrying about getting too far ahead.  “It helps a lot when we need it,” he adds, “and it’s no longer pushed hard – just when I’ve got a few extra loads. That way we’re not pushing the new one or overloading it to keep up on longer hauls.” 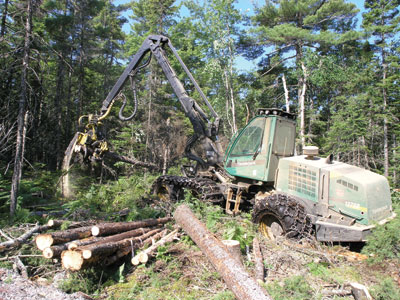 Not that the harvesters are slouches when it comes to piling on the hours. He’s had 1270s with over 29,000 hours, although his current producers have “just” 23,000 hours. When I smile, and imply that 23,000 hours is a lot of hours nonetheless, Deal smiles right back, and quips “I hope not – I still need them.” He adds that in today’s market, double-shifted iron is worth little but scrap after four or five years.

“I’ve run these for 23,000 hours without putting too much into them, but when I talked about trading them in last spring, the dealer told me he’d have to weigh them first – they were just scrap iron. At that point, you may as well keep them working as long as possible, and as long as they produce.”

His annual goal is 50,000 tonnes, but this is not a hard mill quota. “The mill would take more, and one year we made 62,000 tonnes in good wood. But in real rough ground, with long forwarding, and small wood, 50,000 is a stretch. The wood keeps getting smaller and more spread out, so you fight to stay even.”

On the plus side, he says AbitbiBowater has been very good at keeping the contractors running 47 weeks or more per year, which goes a long way to making ends meet, and keeping operators. As an example, the local mills were overlooked – this time at least – in Phase One of the company’s major restructuring, a move that saw company mills shut in BC, Ontario, Quebec, and New Brunswick.

“Even in tough markets, they’ve been pretty good at keeping us working, and I fill in the rest with private work, so I get close to 52 weeks per year. Otherwise, I couldn’t make a go of it, and if the guys are off for a few weeks, they’ll find something else, and then you’re really in bad shape.”

For the future, Deal has no plans to pass the business on to his own son. He had worked for Deal for a year, but soon left the bush to work as a mechanic at a car dealership near Halifax.

“He’s doing well, and it’s stable. I asked him once if he’d be interested in taking over, since I know he’d like to come back here, all things being equal. He asked me to show him where the money was, or at least the chance to make some. That was the end of it. He makes more than I can pay my operators; more than I make, so why do it?”

Which means, despite Terry’s skill, experience, and a seasoned crew, this may well be the final Deal to hit the woods around here, unless the market, and the industry, change their tunes.