The impact of the housing downturn has not been felt equally between regions in Canada or the U.S.  In the U.S., the California redwood region has seen the greatest percentage reduction in softwood lumber shipments (-46.5% over the period 2005–2008), whereas the U.S. South has seen the smallest reduction (-25.8%) over the same period. U.S. West Coast shipments decreased by 35%, while the U.S. Inland region was down by 28.5%.

In comparing Canadian regional shipments between 1994 and 2008, Atlantic Canada (+12%) and the Prairies (+39%) have managed to increase their total softwood shipments the most (see chart). Quebec (-1%), Ontario (-1%) and the B.C Interior (+3%) have been remarkably unchanged. In contrast, the B.C. Coast region’s softwood lumber shipments dropped by a whopping 63% (2.33 billion bf) during the same time period, making this area unique in the country.

The main driver causing lumber as well as OSB problems in the U.S. market continues to be defined by plunging housing starts; housing starts alone represent the largest end-use consumption sector for lumber (normally representing more than a third of both lumber and OSB demand (and up to 45% at more normal levels of housing starts).

Using average annual W-SPF 2x4 random-length (FOB mill) prices, lumber prices have trended higher from 1991 to 2005 as single-family housing starts increased steadily (with some minor corrections in 1995, 2000 and Q4/01–Q1/02). Subsequent to the housing peak in 2005, a 70+% drop in single-family starts through 2009 is now expected (from 1.71 million units to an estimated 480,000). This compares to a 55% drop in annual average W-SPF prices from the peak in 2004 of US$397/Mbf to the bottom in 2009 predicted at US$174/Mbf. With 40%–45% of all lumber normally consumed in new residential housing and another 30% in repair and remodeling, it is abundantly clear that the U.S. housing market has a direct impact on commodity dimension and stud prices.

The correlation between housing starts and OSB prices is also quite strong, except during periods when excessive amounts of new capacity have been constructed. After the 1991 recession, surges of new OSB capacity entered the market that upset the supply/demand balance and negatively impacted prices. The periods were 1995–1997 and 1999–2000. As a result, prices declined during these periods despite relatively strong market dynamics.

Conversely, the huge price spike in 2004 took place when no new capacity was installed in 2003–2004, and this followed significant plywood mill closures; prices soared to record-highs as a result of this unusual timing. For the period 2005–2010, there is a strong correlation between housing starts and OSB prices.

Until housing starts rebound after 2010, it is likely the lumber and panel industry will continue to be in a holding and/or survival pattern. This leaves the industry in trouble as it is facing a number of issues, including:
Many North American producers have no other market options for volume, are completely commodity-focused on S4S, and seem prepared to protect or gain market share at a huge financial cost.

Many of these same commodity lumber producers are tied to pulp mills or have other contractual obligations that makes shutting down mills a less desirable option.

There are wide price spreads on a delivered basis between similar species and grades of lumber. This indicates that aggressive pricing strategies are in place just to move lumber in a tough market in order to keep mills operating (“last mill standing” strategy).

With reduced housing starts in the North American market, Canadians have too many commodity producers chasing the same market, with few options to diversify away from S4S studs and dimension. The rest of the world uses rough sawn lumber (mainly metric sizes and lengths) in construction and industrial applications. With the ability to produce only S4S lumber, North American mills remain stuck with the U.S. market (with higher grades going to Japan), with only a few outlets in export markets (primarily low grade to China and the Middle East).

Currency exchange rate fluctuations have recently clobbered some producing countries (e.g., the U.S.). Other countries, such as Canada, Sweden and Russia (and even the euro-based countries, have gained 20% against the U.S. dollar during the recent global turmoil, creating overnight competitive advantages (with disadvantages for U.S. mills).

As International WOOD MARKETS Group travels the world and picks up numerous inquiries and ideas from its market investigations, we have been trying to shop new product and market concepts to many Canadian lumber producers with no real uptake. Henry Ford’s commodity sales strategy on his Model T of, “any colour you want as long as it is black,” still applies to larger Canadian companies and mills producing S4S dimension and studs. Hence, without more creative out-of-the-box or strategic thinking, it is probably going to be another very tough year for many Canadian mills in 2009 and probably longer until U.S. housing starts reverse their downward trend. It is probably time for some primary mills to review their playbooks for 2009 to see if their business plans and strategy have any real chance of still holding up! 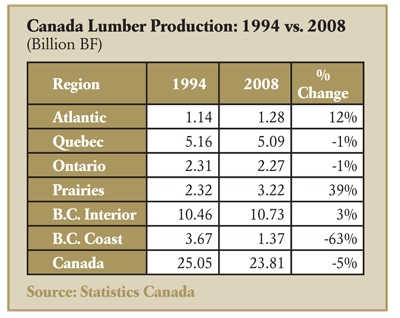