If you want to know anything about the challenges loggers face in the Princeton area of British Columbia, Jim Byrne might just be your “go to” guy. With four decades in the southern B.C. woods, the burly and bearded soft spoken logger has been through most things before, including the tough times facing many contractors today. That’s also taught him a thing or two about loyalty. 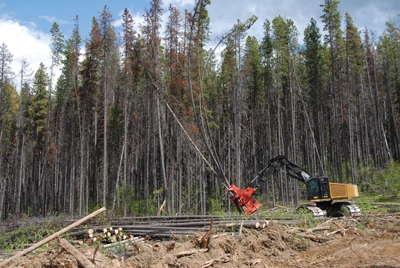 In fact, when Byrne started his own business with two partners back in 1977, he says they really didn’t have much of anything, except the will and desire to work hard. “That wasn’t enough for the banks,” he says with a chuckle. “But Finning Canada (the B.C. and Alberta dealer for Caterpillar), took a chance on us and that’s something I’ve never forgotten. They financed us when nobody else would, and we have been loyal to them ever since.”

Career Change
Byrne, who grew up in Princeton, initially started down a different road. He was one of the first students to attend “a new university” on the top of a mountain in the Vancouver suburb of Burnaby, where he entered the Faculty of Education. That, was of course, Simon Fraser University, which today offers one of the country’s top teaching programs. But for Byrne, spending his time in a classroom wasn’t to be and after two years and some time student teaching, he returned to his roots in Princeton, and to the bush.

“Once I returned home, I got a job with a local company line skidding and building trails for the hand fallers, before buying my own skidder and becoming a sole proprietor,” Byrne explains. “Then in 1977, I got together with two other equipment operators, Ed White and Bill Mervyn, and we formed Jebway Contracting.” 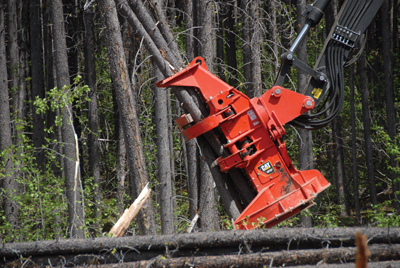 Byrne goes on to add that the company’s name was spawned from the first letter in each of their first names. “J for Jim, E for Ed and B for Bill,” he explains while noting that they have kept the company name all of these years, even though he is now the sole owner. “Bill passed away and Ed and I co-owned the company for a while, but at one point we really needed to invest heavily and Ed decided he liked running the equipment better than owning it, so I bought him out and he still works for me to this day as a processor operator.”

It wouldn’t be the last time Byrne would employ former owners, and a few years ago when Weyerhaeuser, which is Jebway’s main customer, wanted to consolidate contractors as a way to keep unit costs down, Byrne saw it as an opportunity rather than a challenge. “I worked out a deal with Cliff Pelly, who was the owner of Pelly Contracting Ltd.,” he explains. “I bought him out and assumed his volume and today Cliff works for me as my bush boss.”

Optimism Reigns
Even with the current economic climate dampening the spirits of many loggers, Byrne is still upbeat. “The last couple of years haven’t been easy for us and we have been significantly impacted by the downturn in the forest industry, but we are still here and still operating,” he says. “We have learned to adapt and conduct business a little differently. For example, we used to keep the hours low on our equipment and then sell it for a good amount. Now, we run the equipment for longer instead of incurring the capital cost of new gear. We have always taken exceptionally good care of our equipment and that helped us out with resale value in the past, and now it is helping us with longevity of our machines.”

That doesn’t mean Byrne hasn’t invested in the company and new iron. This year alone he has purchased a Caterpillar 525C skidder, two Caterpillar 545C skidders, and two Cat HF201 felling heads. That’s on top of what he picked up late last year – a Caterpillar 541 feller buncher and a Caterpillar 320D processor equipped with a Waratah 622B head.

“I’m hoping to be able to run two skidders instead of three, “ Byrne says of his latest acquisitions. “We were running with three 535B models but the 525C is comparable to the 535B and of course, the 545C will be our biggest skidder. Whenever we can, we will run with the two 545C models, but we will have a third skidder for when we need it.”

As for the new Cat felling heads, Jebway feller buncher operator Ken Stacey says he’s impressed so far. “We have only had this one for a  couple of days,” he notes, as he does some maintenance at the end of his shift. “We have it on our Cat 751 buncher, but we have been running an identical head on our Cat 732 buncher for a couple of months now. We were running 24-in. heads and these are 20-in, but they are just a great head, and even though they are smaller, they are heavier duty than our old heads, which means we are experiencing less downtime. For the smaller diameter trees and the beetle kill wood we are currently working in, they are performing very well.”

Other Gear
In addition to the latest gear he has purchased this year and last year, Byrne has the  Caterpillar 751 and 732B feller bunchers that are equipped with the new Cat HF201 heads, while the new Cat 541 buncher is equipped with one of the company’s older 24-in. Cat felling heads. For processors, he has the new Cat 320D and three Cat 320C models, including one that is used as a spare. All of the 320s are fitted with Waratah 622B processing heads. And, of course for skidders, he has moved to the new gear purchased this year, but he says they did keep an older Cat D5 for skidding on steeper ground.

Byrne also runs road building equipment, primarily for in-block spur roads. “We do about 25 kilometres of road every year with a Cat D6H high drive dozer with a ripper and a D6D as a back-up machine,” he explains. “We also run a Cat 325 with a clam bucket, which we use for excavating and piling brush. It’s not a huge part of what we do and I do most of it myself with the help of my foreman, Cliff Pelly.”

For most of the year, Jebway Contracting keeps a dozen people employed, including Byrne and Pelly, plus another eight subcontractors for the loading and trucking portions of their stump to dump contract with Weyerhaeuser. Byrne says they harvest about 170,000 cubic metres of timber annually for Weyerhaeuser’s Princeton mill, noting that most of it comes form about a 100 kilometre radius of the southern B.C. town. “The mill has been running on a regular basis so we have been able to hold our volumes this year,” Byrne notes. “We are starting to see some improvements in the lumber business, but lumber prices have been fluctuating quite a bit this year, so I think it could still be some time before things really stabilize.”

Looking Forward
As for the future, Byrne says he is 64 this year, but he is not looking at retiring anytime soon. “I still have more good days than bad,” he jokes. “And, I don’t know what I would do with myself if I wasn’t logging. I’m optimistic that things will turn around and that is one of the reasons I have invested in new equipment. The forest industry still has a big presence in this province and I hope it does for some time to come.”

When asked if he would choose logging if he could start all over again, Byrne thinks about it for a very short second, but you already know what his answer will be before he says it. “There are a lot of things in the logging business that are out of your control, but I enjoy it, and I would have to say I probably would do it again,” he says, with the caveat that he may have answered differently if it wasn’t for the support he has had from his crew and his family over the years, especially his wife, Debbie, who helps out in the business and is extremely dedicated and supportive of his endeavours.

“I’m a people person and I don’t think you are going anywhere without the right people around you, and that goes for work and at home. All of my life, I have gone on the theory that you have to give to get, and I have tried to operate my business that way. In doing so, I would have to say I have built one of the best crews around, and they are the biggest asset this company has. For me, it’s that dedication and loyalty from my crew and my family that makes this all worthwhile.”