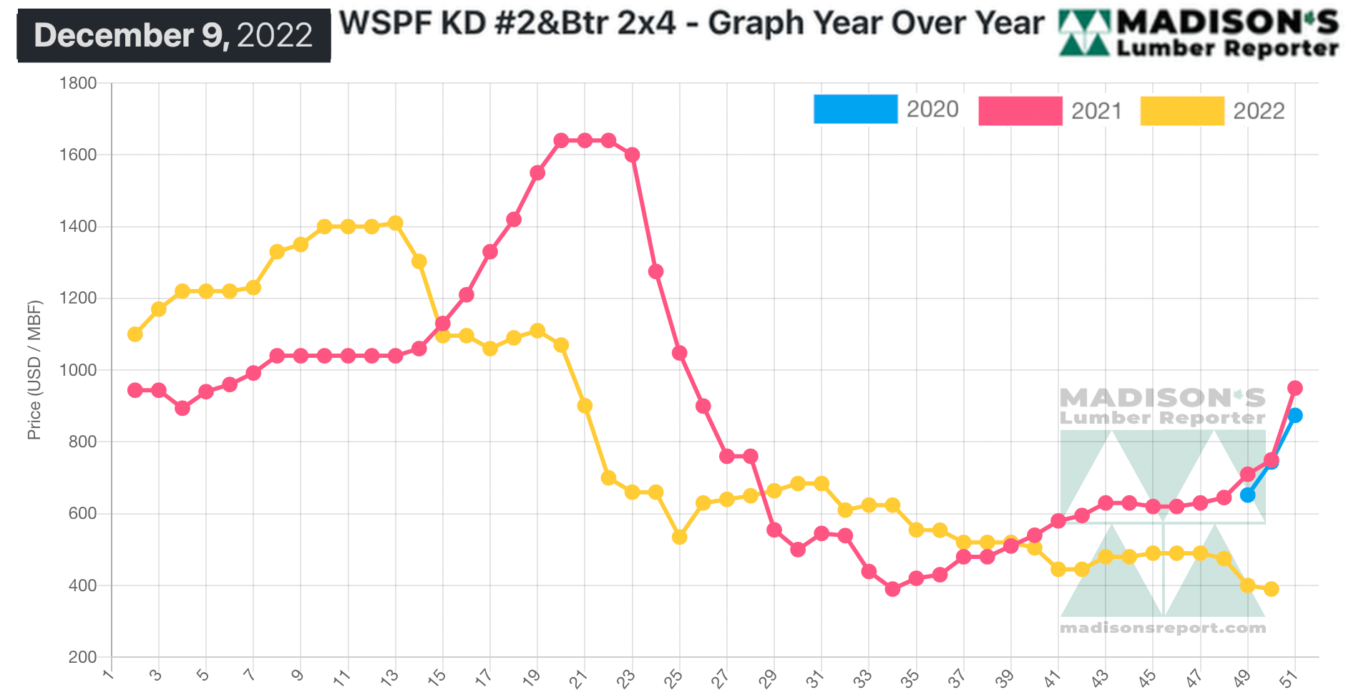 A combination of the normal seasonal slowdown in demand, due to construction activity reducing during winter, and plenty of supply throughout the marketplace brought steady-to-lower lumber prices. As the holiday season quickly approached, producers across the continent took extended downtime. This not only for the usual seasonal curtailments and maintenance, but also in response to quite weak demand. At this point of the year no one wants to build inventory, whether sawmill or wholesaler. While the phones at sales desks still rang, supply remained ample enough that sellers could barely hold off reducing prices further.

Producer asking prices were mostly flat from the previous week, with narrows correcting another few points. Interest in stud trims was again beyond lacklustre. 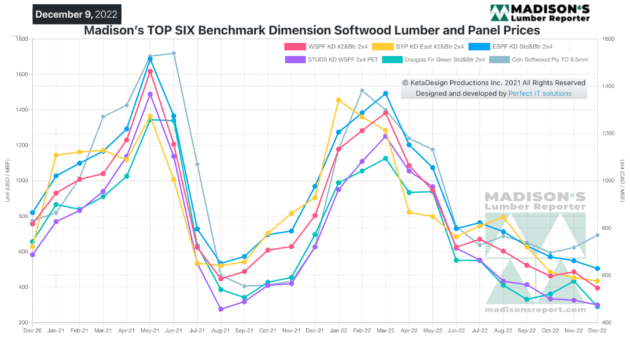 Traders of Western S-P-F lumber and studs in the U.S. reported moderate sales early in the week after demand was stirred up by curtailment announcements from major Canadian producers. The hubbub died down after midweek however, as buyers turned their focus back to cautiously filling out their inventories or holding steady in advance of year-end. For their part, sawmills felt downward pressure easing as December 19th production schedules took them into their holiday maintenance and/or shutdown periods.

Canadian purveyors of Western S-P-F lumber reported lackadaisical demand overall, even with lumber futures popping amid a bump of business early in the week. That jot of buyer activity came after Canfor announced it will temporarily curtail Canadian production due to weak market conditions. Sawmills in BC and Alberta will be affected starting December 19th, reducing the company’s output by approximately 150 million board feet through December and January. The associated reduction in overall supply appeared to be balanced out by persistently weak demand due to ongoing negativity in broad economic terms including inflation, fuel prices, and housing metrics.

Buyers remained reticent to cover more than immediate needs, sticking to LTL orders through the distribution network to carefully manage inventory levels ahead of year-end.

“Sales of Eastern S-P-F tailed off late the previous week, with prices on standard grade commodities meandering downward while low grade numbers were firm by comparison. That rambling pace of business bled into the current week, with traders reporting good, but selective, demand. Sawmills showed less availability as the week wore on, as many were already in the process of ramping down production due to unreliable market conditions and decreasing buyer activity consistent with the winter season. Plenty of dealer yards were also battening down the hatches, giving motivated buyers less options to cover their immediate needs. Narrow dimension items were the only commodities accumulating to any degree, with cheap quotes and fluctuating price points muddying the waters as suppliers tried to rid themselves of excess inventory. ” — Madison’s Lumber Reporter