After staying flat over the Canadian Victoria Day long weekend and U.S. Memorial Day holiday, lumber prices wavered slightly before falling dramatically in the past two weeks. Now that price quotes are approaching something reasonably close to what sticker-shocked customers might want to pay, sales volumes are improving. Have suppliers and buyers found the sweet spot where lumber prices will settle until the weather turns winter-like and construction stops for the year? We won’t know until after the dual Canada Day/Independence Day long weekend at the beginning of July. In terms of the condition for customers, U.S. Census Bureau and the Department of Housing and Urban Development data released this week of new house prices shows new homes for sale are experiencing the same supply squeeze as lumber has been. The median sales price rose to a record US$374,400 in May. About 76 per cent of homes sold last month were either under construction or yet to be built. This is a phenomenal ratio, suggesting more of a bullish environment for home builders still to come.

Sales of new U.S. single-family homes fell to a one-year low in May as the median price of newly built houses soared amid expensive raw materials, including framing lumber. New home sales comprise 10 per cent of the housing market and are considered a leading housing market indicator as they are recorded when contracts are signed. There were 330,000 new homes on the market last month, up from 315,000 in April. At May’s sales pace it would take 5.1 months to clear the supply of houses on the market, up from 4.6 months in April.

“Douglas-fir and sheet goods’ prices continued to hold on comparatively while the rest of the market cratered further.” — Madison’s Lumber Reporter

Western S-P-F sawmills in the U.S. had little to no order file to speak of as buyers continued to wait and watch for the most part. There was still a steady stream of takeaway as many buyers found their preferred price and jumped in – largely dependent on the state of their individual inventories – and price reports varied wildly due to the sheer number of counter-offers being entertained by different producers. A large contingent of customers continued to lean on whatever inventory they had on the ground as they waited to pounce at the elusive bottom to buy.

Canadian Western S-P-F producers continued their struggle to find takeaway of serious volumes as buyers smelled blood and were often content to wait and see how deep corrections would go before stepping in to close purchases. Demand was still there, but was accompanied by considerable counter-offers on top of – or, more appropriately, below – asking prices from sawmills. Levels were all over the place as some producers tried to hold the line while others slashed their numbers with aplomb to entice buyers. 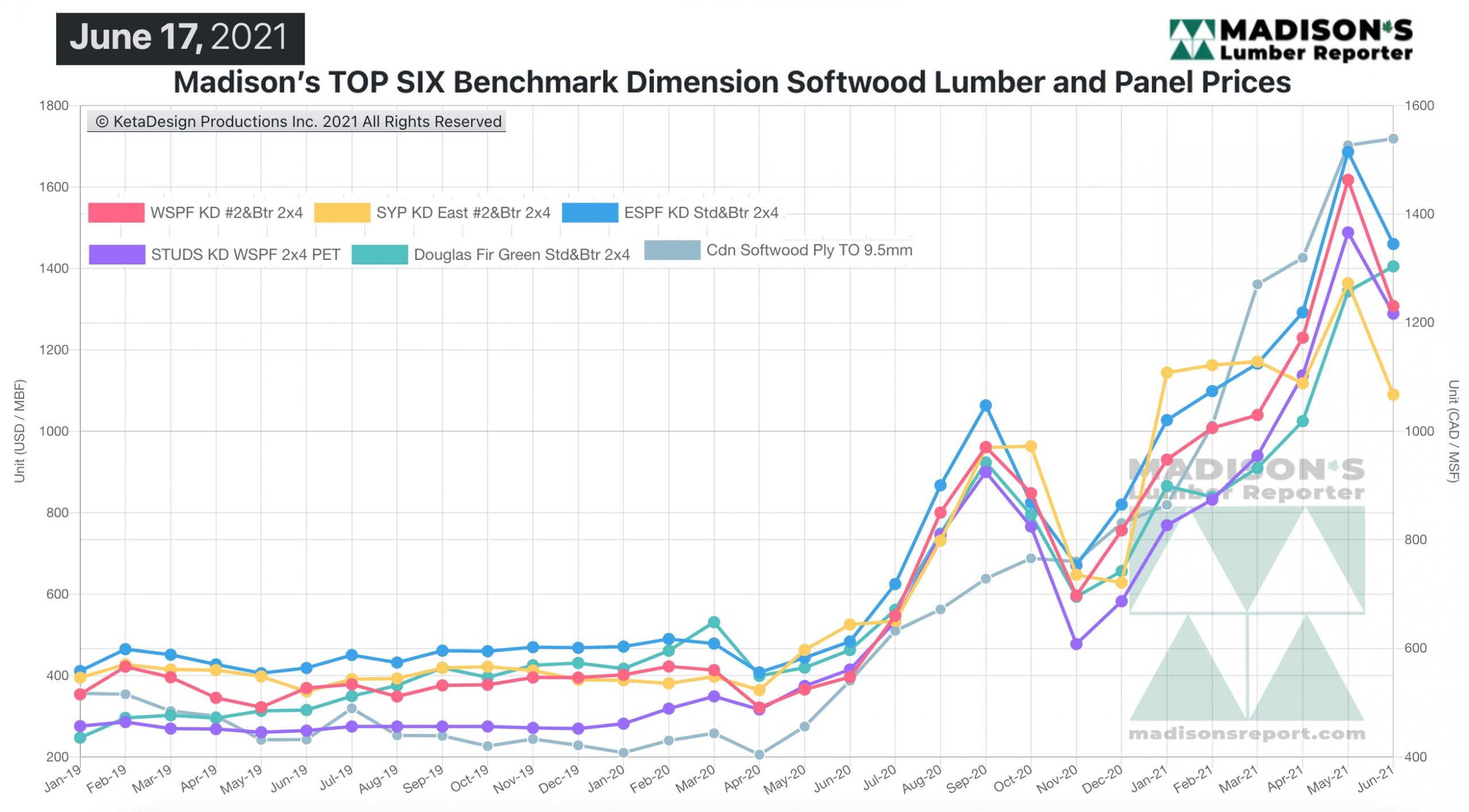 Extended customer reluctance during much of June finally resulted in real price decreases, thus for the week ending June 17, 2021 the wholesaler price of benchmark softwood lumber commodity item Western S-P-F KD 2×4 #2&Btr continued dramatic drops, down by -$227, or -18%, to US$1,048, from $1,275 mfbm the previous week.

“Demand in Eastern Canada was slow to start the week as buyers remained circumspect and confident that prices would slide more before they needed to jump in. From Tuesday-on mills persistently established lower numbers and accepted counters to keep product moving.” — Madison’s Lumber Reporter 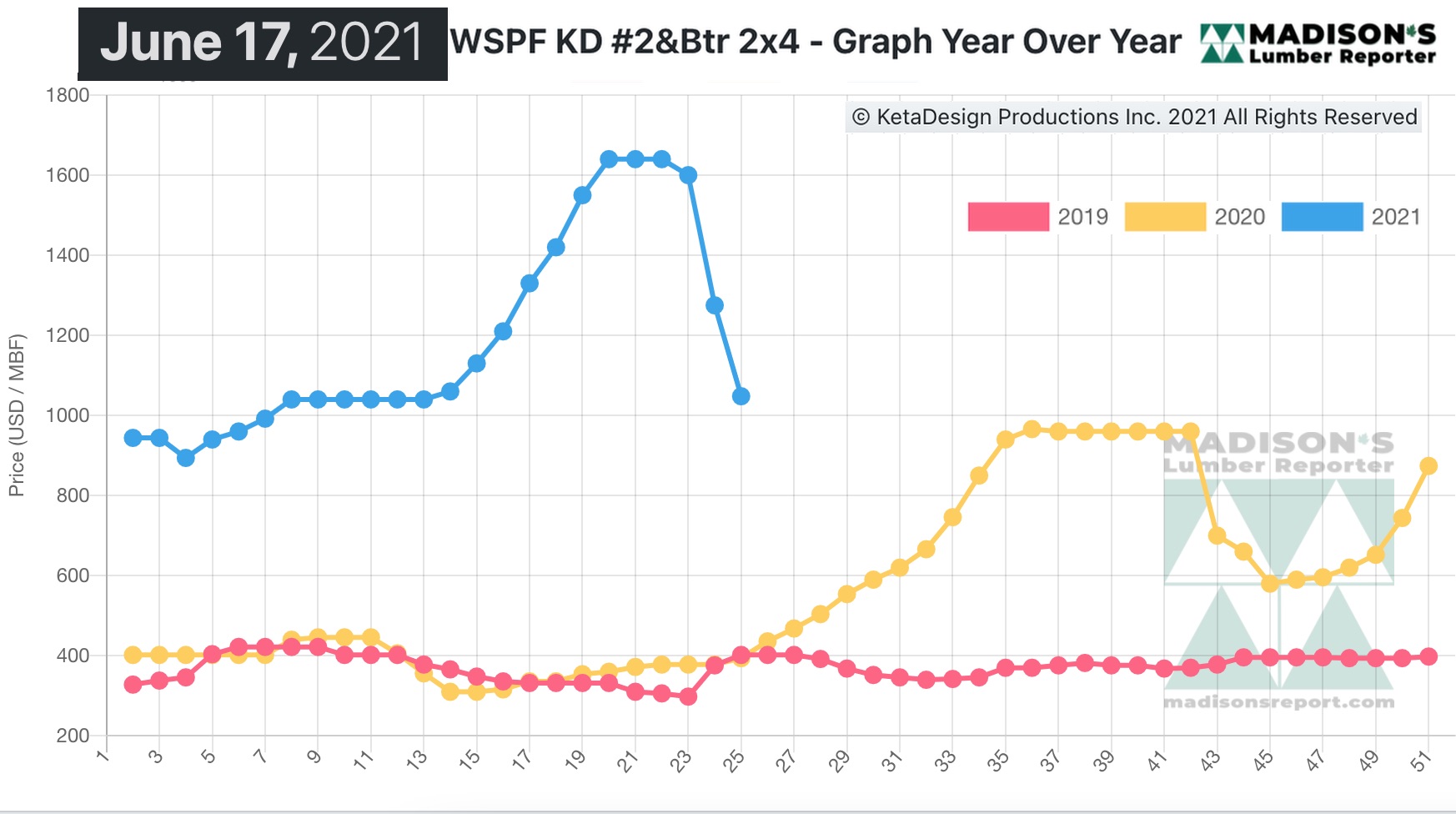