June 6, 2016 – The Council of Forest Industries (COFI) today announced the winners of the 48th BC Lumber Grading Championship held in Kelowna on May 28, 2016 where top lumber graders from around the province gathered to demonstrate their skills.

This year’s winners include:
• Brian Marsh of Comact, Prince George (PG), scored the highest practical mark in the entire event and won the Champion of Champions Division, the toughest competition which is open only to past winners.

• The First Year Division, lumber graders attending the competition for their first time, was won by Lily Zhou of West Fraser – Quesnel Division, with Raymond Wium of Canfor – PG Sawmill in second place.

“This annual lumber grading competition is an opportunity for lumber graders to showcase their skills and the quality of their work,” said Gary Desrosier, quality control manager for the Council of Forest Industries. Pacific Lumber Inspection Bureau will host next year’s event in Kamloops.

The Council of Forest Industries (COFI) is the voice of the BC interior forest industry. COFI members vary in size and produce lumber, pulp and paper, panels and engineered wood products at more than 60 facilities across the interior. All share a commitment to a future based on employee safety, sustainable forestry and manufacturing practices, and innovative product development. 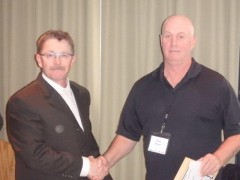